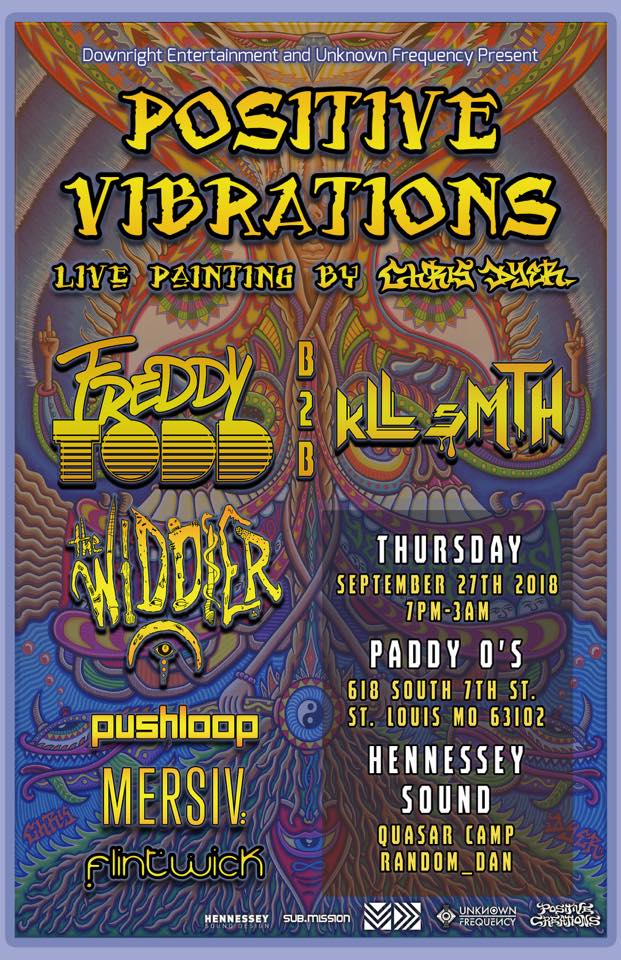 The brains behind Unknown Frequency and Downright Entertainment are coming together once again to bring a ludicrous lineup to the River City. Positive Vibrations hits Paddy O's in St Louis, Missouri on Thursday, September 27th, which might just be a perfect little stopover for fans streaming into the state for Astral Lights.

Heading up the music bill are two of our favorite underground bass acts going back-to-back for the first time in middle America. In fact, we just debuted a collab between Freddy Todd and kLL sMTH that came out on the former's recent Wakaan album. This kLL Freddy combo will have you digitally sizzlin' into your weekend.

From the Back to Basics tour are two alums of The Untz Festival who know how to get our deep dubstep motor running: The Widdler and pushloop. These guys are on tour all fall long, but you want to get in as many reps as you can while you're giving your noodle a full workout, so jump on this opportunity.

Fans have been freaking out about Mersiv since the summer, and the Unknown/Downright guys have delivered for their fan base. Regional support comes from Arkansas' Flintwick as well as locals Quasar Camp and Random_Dan.

To top things all off, legendary visionary artist Chris Dyer will be live painting throughout the evening. You've seen his stuff all over the industry, from flags to t-shirts to festival posters. Dyer's talent and innovation are truly unmatched, and fans are so lucky to be able to watch the master in action.

And the cherry on top of this multi-tiered cake? Hennessey Sound will be providing the system for this event, so thick, clean bass is in your future. Trust that we know the power of this rig. This show runs from 7pm to 3am for its 18+ crowd, and there is so much packed into each and every minute that you will not want to miss a second.

Get your Positive Vibrations tickets today!