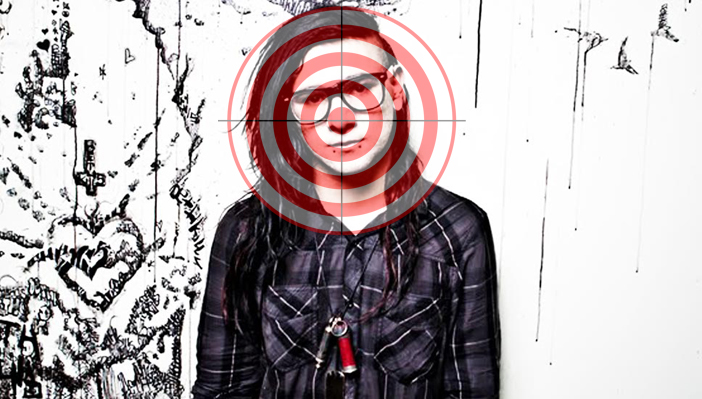 If some sad sack with way too much time on his hands were to tally up all the negative comments posted on TheUntz.com Facebook wall, it would reveal that the majority of trolls were targeting Skrillex. What is it about Sonny Moore that brings out the venom in people? Do underground fans hate him because they think he sold out? Do other producers hate him because they're jealous? Do parents hate him because their teenage sons blast that noise all day while they're playing Call of Duty and munching on Funyuns? Do hipsters hate him because they hate everything? It seems like the only people defending Skrillex are grammatically-challenged Filipina tweens on YouTube.
I'm not a Skrillex apologist, because I don't think he's done anything wrong. Whether or not you think he ripped off DZ, or you believe Rob Swire and 12th Planet were ghost-producing his early work, the bass music, nay, electronic dance music world changed when he came on the scene. It's undeniable. The radical shift in production techniques and sound palettes was instantly and irrevocably altered once Scary Monsters touched down. I heard it myself. I watched this happen.
I know this isn't going to be a popular list, and I know that this isn't going to score me a lot of points with my hipper colleagues, but I felt as editor in chief of TheUntz.com it was my duty to take a look at the contributions Sonny Moore has made to the electronic music industry, and his impact on its explosive rise to mainstream viability. This might be more for the knee-jerk reactionaries who wish Skrillex AIDS, diarrhea, and other ill will on the message boards than those YouTube crusaders. Haters gonna hate. Taters gonna tate.

By the time non-dance music aficionados were coming to grips with the "dub step thing," Skrillex had already demonstrated that he was trying to change all bass-heavy subgenres. His early complextro offerings carried his signature growls, but the dogged devotion to the brands of dance music he cherished shone through in his rule-breaking tendencies. Completely shattering the steady "untz untz untz" of his contemporary's electro, to totally throw dancers off seemed like a crazy move--especially when you're breaking up the flow with the sounds of an Atari tumbling down the stairs--but the inexplicably irreverent "desctruction drops" became a staple of everyone's heavier stuff for a long while after.

By the time "Bangarang" rolled around anticipation was only eclipsed by expectation. Would Skrillex rise to the occasion and change the game again, or crumble under the pressure and suffer an inevitible sophomore slump. While the major label release sold like hotcakes and the ensuing video of a nasty little man getting his comeuppance scorched its way across the internet, critics had to shrug their shoulders and admit that Moore wasn't a flash-in-the-pan. Regardless of whether or not the track is a gamechanger (which it wasn't, as everyone had caught up and caught on by the time of its release), the point was, it had mass appeal. It snagged him more accolades, and it was a fitting tribute to what was probably his favorite childhood film (based on all the Lost Boys references), Hook. Ru-fee-OOOOH!

"OMG OMG OMG Skrillex is doing trap!!!" That was expected, right? The man had tried his hand at every other genre, so when the nascent trend started busting out bigger and bigger last year, it only made sense that Sonny was going to give it a go. The cool thing is, he took on French turntablists and all around mad men Birdy Nam Nam, who are already super awesome, and then he still managed to put his own twist on it. And some people don't even call this trap. It's still got that "anti-drop" that's all about space instead of hard-edged sound--and of course the pitched-down vocals help. And the sirens? C'mon. It's a trap. It's just his version of it.

Back in the day, a young fan approached John Dadzie in a club and picked his brain about this and that. Years later, 12th Planet became the biggest champion of Skrillex's rise to glory, and the two friends were able to revel in all the fun and excitement of the superstar's explosive ride, sharing not only copious bottles of champagne and stage dives, but also studio time. "Father Said" is a truly shining example of the screamo tactics Moore held over from his days at the helm of From First To Last. The angsty lyrics and, frankly, beautiful pleading is not only technically impressive, but also revelatory about Skrillex's own familial feelings. Even if  you don't like his voice, you have to credit his ability to bear his soul in a dance number.

The Re:Generation Music Project paired Pretty Lights with Ralph Stanley, Mark Ronson with the Preservation Hall Jazz Band, Mavis Staples with The Crystal Method, and legendary rockers The Doors with Skrillex. When Ray Manzarek (whom we recently lost) and Robbie Krieger first met Sonny, they were wary of his skills and his sound. But he was able to win them over bit by bit, and eventually helped The Doors write their first song since the death of rock god Jim Morrison. Kind of a crazy feather in his cap. Ray's signature organ sounds pave the way for a capable solo from Krieger. And it actually sounds like they had fun making this tune. Skrillex got to make an appearance with The fucking Doors. That's badass.