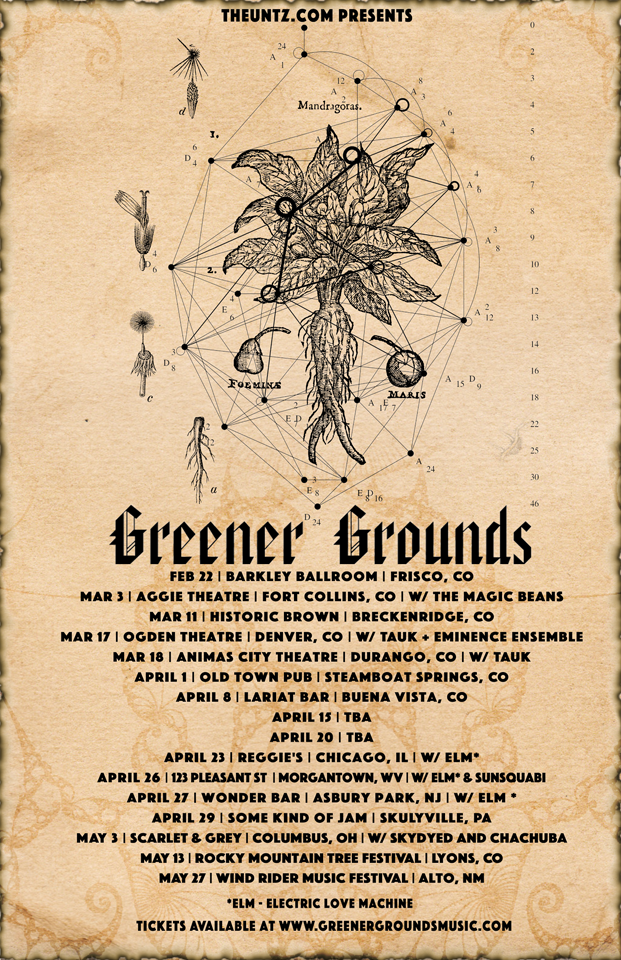 Denver-based livetronica outfit Greener Grounds is once again taking off on an ambitious spring tour presented by us here at TheUntz.com. Since performing at our inaugural edition of The Untz Festival back in June, the Colorado jam band has undergone some lineup changes, but nevertheless remains road-hungry and committed to bringing its sound all over the country to new fans in new markets.

The guys set off on a three-month run later this month with stops all over their home state of Colorado, before pushing east in April. Along the way, the band will be joined by rising stars in the industry like The Magic Beans, TAUK, Eminence Ensemble, SunSquabi, Chachuba, and a number of dates with ELM (Electric Love Machine).

On top of several club dates around the country, the band will be performing at a number of festivals including Some Kind of Jam in Schuylkill Haven, Pennsylvania, Rocky Mountain Tree Festival in Lyons, Colorado, and Wind Rider Music Festival in Alto, New Mexico. Already on the schedule for summer 2017 is a stop at SONIC BLOOM taking place June 15-18 in Spanish Peaks County, Colorado.

Guitarist Joe Shur, bassist Jay Rieder, and drummer A.J. Gillman have been filling the role of keyboardist Roland Hansen, who left the band last year to pursue his philanthropic work in Haiti, with a revolving lineup of players, but look to find a permanent replacement before spring tour kicks off in earnest.