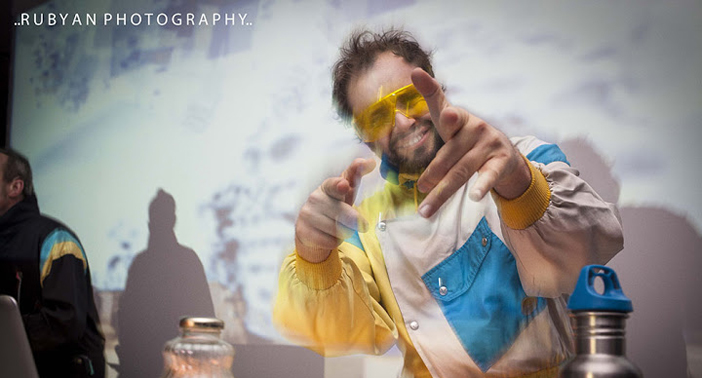 If you see a plethora of people standing outside a club wearing onesies, there's a good chance that The Polish Ambassador is afoot.

No, not the actual ambassador to Poland. I'm talking about the cultural phenomenon known legally as David Sugalski and known to the electronic music community as the Funky Diplomat (and formerly as Ample Mammal).

Dave is one of the most genuine and progressive dudes in the industry. He's pushing for venues to carry non-alcoholic beverages at his concerts, asks fans to "pay what you want" for his music and always hangs around after the show to talk to his posse. The Oakland native brought a trio of companions with him to Neumos in Seattle on April 3 for a performance popping with energy, sexy bass music and jumpsuits.

"What's with the onesies and jumpsuits?" you might ask. The Polish Ambassador (TPA for short) and his Jumpsuit Records entourage never take the stage without their custom-made onesies. He decided to call his 2013 fall tour "Getting Funky In Your One-Piece" and encouraged his fans to rock any form of jumpsuit that they so desired. During his previous visit to Seattle's The Crocodile in November, he announced over the microphone that the crowd probably had the highest percentage of onesies on the whole tour. This crowd once again brought the jumpsuits, and the Jumpsuit Records family brought us a whole new level of artistry.

No Polish Ambassador show would be complete without the swirling visuals of Liminus. The man responsible for TPA's improvised graphic accompaniment is also the only visual artist I've seen that stands (dances, actually) on stage while he works his magic. Polish's longtime collaborator, Ayla Nereo, began the night with a solo performance laden with angelic ballads from her debut album "Hollow Bone." She was joined for part of her set by the trumpet-wielding SaQi, the fourth and newest member of Jumpsuit Records, who then went on to deliver his own set of funky, soulful beats. After SaQi finished, Ayla came back on stage with Dave, who together form Wildlight, for a set complete with harmonic melodies and capped off by a special treat - an improvised song. Ayla uses a machine that allows her to record and loop vocal samples on the fly. The song existed only in that moment and then faded away into the night never to be heard again.

When the jumpsuiter-in-chief finally took the stage, he did not disappoint. Three of the first four songs he played were brand new (presumably to be released on his forthcoming album Pushing Through The Pavement). The tracks possessed a similarly organic vibe to Ecozoic, his most recent album, without sounding redundant. His earlier music, especially what he created as Ample Mammal, relied more on rap samples and twisted, futuristic synthesizers. The recent TPA sets I'd seen at The Crocodile, Burning Man and Electric Forest comprised more of his newer material and less of the older glitch hop sound. This show, however, had it all: from unreleased tracks to the tribal sounds of Ecozoic to classic glitchy tunes like his remix of Michael Jackson's "Beat It."

The highlight of the show came after a rambling yet endearing speech by the Jumpsuit boss. Dave thanked the crowd for coming out and reminding us how to download his music before he and Liminus disappeared off stage. There seemed to be something fishy going on, and the TPA faithful stuck around, hooting and hollering chants of "encore!" and "one more song!" After what seemed like an hour (in reality, probably about three minutes), all four Jumpsuit members reemerged sporting goofy wigs to play their new collaboration entitled "Victory Lap." Ayla asked the crowd to repeat line "put all your heart in this" whenever she sang it, and together we closed out the night.

This was easily the most entertaining, creative and well-executed Polish Ambassador show I'd ever witnessed (and participated in). Whenever his new album comes out, there's only one place I'll be: jamming out in front of my speakers decked out in my finest onesie.