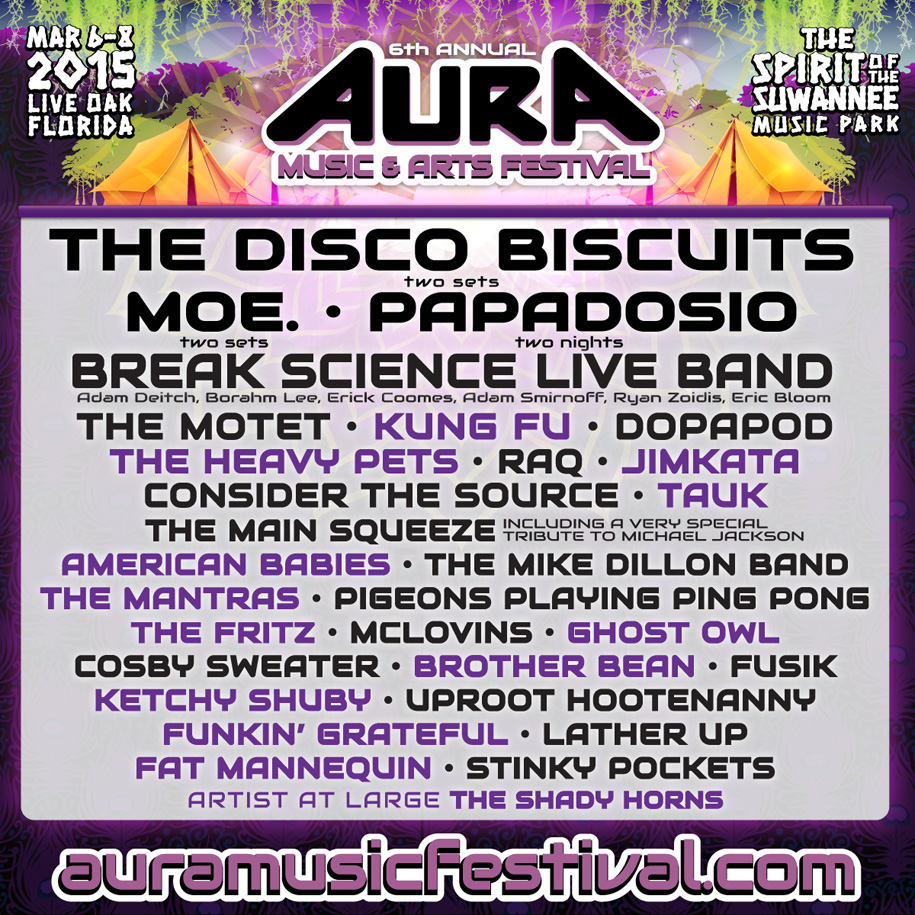 AURA Music and Arts Festival kicks off today, and that means it’s time to get excited for another weekend of great music at Spirit of the Suwannee Music Park. The AURA crew has put together a stellar lineup for us this year, on the slightly later dates of March 6-8, 2015. Here’s some background on a few names I consider must-sees if you want to maximize your time spent at my favorite outdoor venue in Florida.

Adam Deitch and Borahm Lee never fail to impress crowds with their in-your-face, break-nasty style of electronic music, aptly named Break Science. Don’t get me wrong, these guys are dynamic; on their last visit to Suwannee Music Park, they shared the stage with Talib Kweli and Niko Is for an old-school hip-hop groove.

This time, the Brooklyn-based duo will be joined by a few of Deitch’s Lettuce bandmates — Jesus Coomes (bass), Adam Smirnoff (guitar), Ryan Zoidis (saxophone), and Eric “Benny” Bloom (trumpet) — for the debut performance of the Break Science Live Band. If you know Lettuce, you know this is going to be good. If you don’t, just trust me, you don’t want to miss it.

You’ll definitely want to stop in and hear how this band has progressed since its first appearance at AURA in 2012. With the new album, Never Odd or Even, receiving rave reviews from writers all over the country (including our own Sterling Martin), Dopapod is stepping away from the pack and dialing in on an impressive and imaginative style of futuristic rock.

Eli Winderman holds it down on keys, with a rig that includes a synth, organ, and clavinet. Rob Compa shreds on guitar, with a voice that will make you feel like you’ve teleported to some distant part of the universe. Chuck Jones lays down a slick bassline, and Scotty Zwang drives it all home on drums. Together, these four are blazing new trails and redefining what “jam band” can mean. Get ready to get a little weird.

Though various members of The Disco Biscuits have performed at AURA with side projects — Allen Aucoin (drums) with Dr. Fameus, Aron Magner (keys, vocals) and Marc Brownstein (bass, vocals) with Conspirator — the band has not been seen on the lineup before this year. The aforementioned three, along with Jon Gutwillig (guitar, vocals), will be headlining with two sets and delighting fans with spirited jams and mesmerizing light shows for close to three hours on Saturday night.

Out Here features several guests from other bands, including Andy Farag and Joel Cummins of Umphrey’s McGee, and Joe Hettinga and Marcus Rezak of Digital Tape Machine, two bands that Turbo Suit has shared the stage with in the past. Single “Coogi Wolf” sounds like a cross between the styles of Big G and EOTO. Be prepared for an all out dance party.

Back for a second AURA appearance, The Main Squeeze will be serving up some more of its “freshly squozen” post funk at Suwannee Music Park. This year, the band will also do a tribute to Michael Jackson, certain to be a “thriller” considering the powerhouse vocals from Corey Frye and talented playing from Ben "Smiley" Silverstein (keys), Max Newman (guitar), Jeremiah Hunt (bass), and Reuben Gingrich (drums).

AURA 2015 has a full three days (plus a Thursday night pre-party) packed with performances by incredible musicians ready to share their crafts with enthusiastic music lovers. Consider these five acts when constructing your personal schedule for the weekend, and share any bands you think are must-sees in the comments.

See you in Live Oak! (Don’t have a ticket yet? Get one here.)