We’ve all heard of Electric Forest, Symbiosis, Coachella, and the like, but if you find yourself in the southwest, the Tucson Gem & Jam Festival is gearing up for its 8th year and you don't want to miss it. They aren’t the biggest name in the festival game, but they sure have the names to compete.

MiMOSA tops the list, bringing his sexy trill bass to Tucson alongside the funky vintage sounds of BoomBox and a DJ Set from Purity Ring. Random Rab, Thriftworks, Eliot Lipp, SuperVision, Paul Basic, Russ Liquid, Desert Dwellers, Kalya Scintilla, and Bluetech are among the big names decorating the top of this star-studded lineup.


Just yesterday, we unveiled the hot new compilation from the fine folks at EC Presents. Smash & Grab stylishly wove together wildly different tracks from some of the hottest acts on the bill. This is a perfect sampler to get you hyped for the early February event.

Not only are there big names in music headlining the weekend, but visionary artists Alex & Allyson Grey will be anchoring this convergence of great progressive minds. If the music didn’t sell you, the art is proof you should be there. They are joined Jesse Noemind, Jake Kobrin, Tribe13, The Welch Brothers, and more. 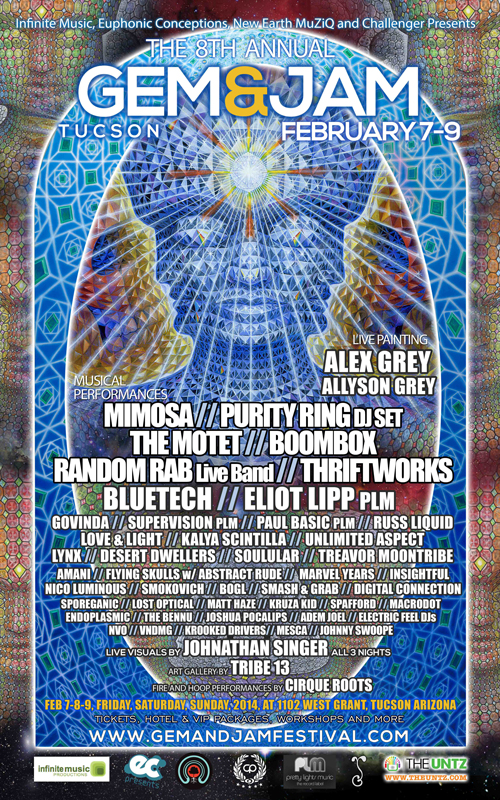 The 8th Annual Tucson Gem & Jam Festival will be held from February 7-9, 2014 in Tucson, Arizona.