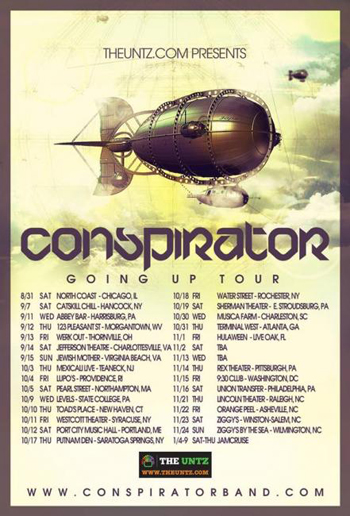 There is nothing to dislike about the 9:30 Club. Simply put, it is the quintessential midsized venue of our time. The sound is absolutely flawless from anywhere in the room, even on the gigantic wrap-around balcony. It’s situated in an extremely convenient location right near a metro station. There are four… FOUR bars serving an insane amount of draft beers. And the booking, oh goodness the booking. The vast majority of today’s successful musicians have played the 9:30 at some point in their career, it is one of the great gatekeepers of the east coast music scene. Which brings us to Conspirator…

Now in their umpteenth incarnation as a band, Conspirator really gelled during their Going Up tour, presented by TheUntz.com, which just wrapped last week. They have always been one of the most interesting live electronica acts, but it is clear to see that the pieces are finally falling into place. With the departure of drummer KJ Sawka, the sound of Conspirator has changed once again. The void has been filled with new drummer, Torch (Gregory Sgrulloni) and a whole hell of a lot of improvisation. This recent addition to the band has allowed the dynamic of Conspirator to mature without missing a beat. It’s most evident on some of the harder, more dubstep oriented tracks from the Unleashed EP… songs that were relatively straightforward electronic bangers on the album are now fleshed out into 20+ minute exploratory jam sessions.

The direction the group is taking now can be appreciated by oldschool Biscuit heads and younger fans alike. It really is a testament to Torch’s abilities as a musician that he managed to fill the space left by KJ Sawka and even expand upon those areas in which the band was lacking. His run and gun style of percussion seems to be a better fit for the group than the mechanically precise stylings of Sawka. As usual, the cooler than ice demeanor of Brownstein provides a nice counterbalance to the ridiculously fiery noodling of Michetti.

Magner, the Rock of Gi-Biscuitar, has been habitually consistent in his synth playing. The visuals and lighting have been cranked up a few notches on this tour and they are absolutely mesmerizing. These guys are hitting new highs as a group right now and the fanbase is coming out in droves; this was the biggest turnout for a Conspirator show yet and the crowd of over 750 in attendance were loving every minute.

Not only was the audience digging the newly evolved sound, during the entire show it was hard not to notice that Brownie looks to be having much more fun on stage than he has in the past couple years. A few highlights from the show were an electrifying rendition of "The Commish" leading into some extended jamming during "Up." Also, a "Caves of the East" was dropped that was among the finest versions of the song ever performed. Conspirator isn’t going to take off and leave us anytime soon… but they are Going Up!