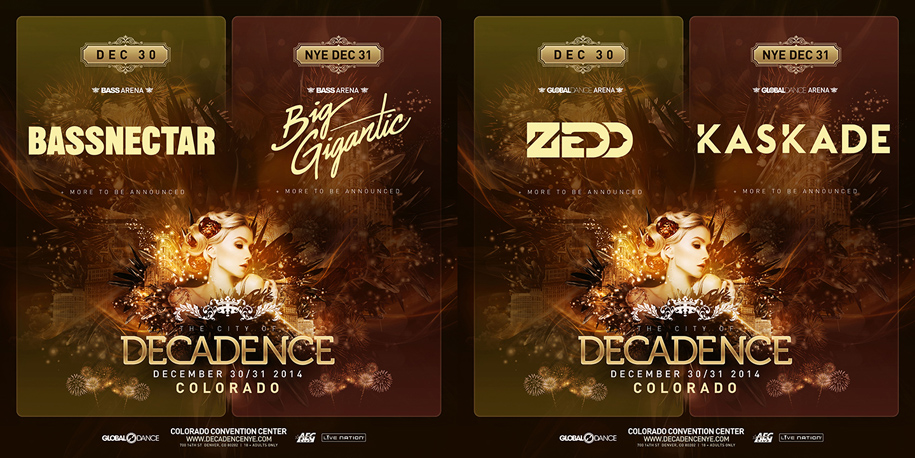 The announcements keep rolling in! Bassnectar and Big Gigantic will headline the annual Decadence NYE blowout at the Colorado Convention Center in Denver, CO on December 30th and 31st, 2014.

With the two heavy-hitters having recently crushed a sold out Madison Square Garden in New York, Bassnectar having just announced his special NYE 360 plans for Nashville, TN, and Big Gigantic completing a two-night run at the legendary Red Rocks Amphitheatre at the end of last month, this announcement that two of Colorado's favorites will be in town for the run-up to 2015 makes dance music fans in the Centennial State mighty proud.

On the EDM side of the equation are two of the absolute biggest superstar DJs on the planet at this moment. Zedd and Kaskade will split duties on the 30th and 31st, respectively, giving house, trance, and electro fans in Denver something to cheer about.

Global Dance Music, the brains behind the annual Global Dance Festival at Red Rocks, just chalked up its 20th anniversary of Skylab with a sellout of the Denver Coliseum, and now unveils this massive NYE lineup for Decadence, with many more stellar acts to be announced. Last year, Global Dance paired Bassnectar with Pretty Lights, Datsik, 12th Planet, and so many more, so you know this lineup is about to get even bigger.

Decadence NYE is for those 18 and older. The first tier of two-day passes and single-day tickets go on sale Friday, October 10 at 10am MDT at DecadenceNYE.com. Careful, these things go fast.