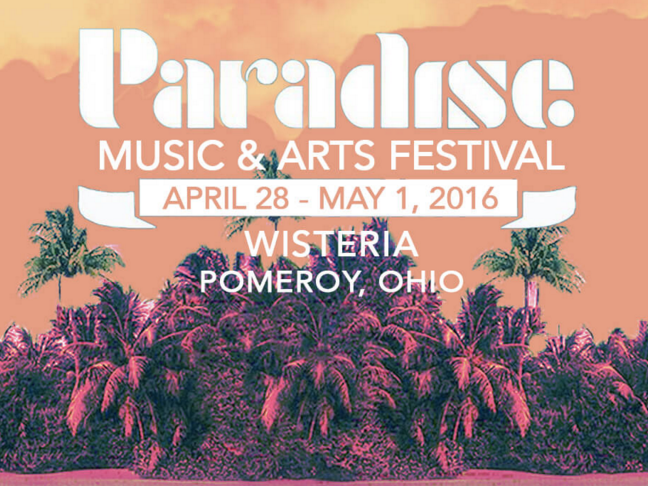 With many music lovers starting their countdowns to some of their favorite big music festivals this summer, many smaller scale festivals are preparing festival aficionados for the beginning of their summer of sounds. Essential Productions & A-Town Roots are kicking off the Midwest’s plethora of rhythmic gatherings with the third Paradise Music & Arts Festival.

Located at the Wisteria Campground in Pomeroy, OH, less than 20 miles outside of the hippie haven of Athens, OH, Paradise brings about an assorted lineup of national headliners, regional favorites and local flavor. With three stages, a talented crew of visual & performing artists, yoga workshops, an artist/DJ sound lab, and, of course, amazing live electronic, jam, psychedelic and funk music, including some phenomenal tribute sets and super jams. Paradise will be the epitome of a close-knit congregation that festival lovers everywhere thrive on.

With the festival growing close, click here to score your tickets!

If you’re spending a weekend in Paradise, here’s a rundown of 10 acts that you NEED to witness.

Combining psychedelic rock with groovy funk, this young Columbus, Ohio four piece has been making some serious waves all across the state. With expert guitar riffing, gnarly bass grooves and phenomenal vocals, this hardworking group brings a modern flavor to some of the old school sounds we’ve all grown to love. Though performing early in the afternoon on Saturday, their high-energy live performance will surely amass a dancing crowd to the side stage!

Many of the top quality electronic acts attending the festival this year fall under the "future funk" and "electro soul” realm that has gained enormous amounts of popularity in the festival scene over the past few years. Cory Wythe, the mastermind behind Marvel Years, embodies the talent of this growing tribe of brilliant musicians. Taking the best of both those genres and mashing them up with classic hip hop instrumental structures and funky guitar work; Wythe creates a phenomenal live experience with amazing beats and uplifting electronic melodies for everyone to get down to. After already throwing down at both Euphoria and Fool’s Paradise this year, Marvel Years’ Friday late night set will show the Funk Capital of the World what the new school of funk is all about. And you can also catch him at The Untz Festival, hitting Mariposa, CA June 2-4.

When it comes to tribute bands, Pink Talking Fish really goes above and beyond. Calling themselves a “Hybrid Tribute Fusion Act,” the four piece connects the classic music of Pink Floyd, The Talking Heads and Phish together to create a live experience that nearly no other tribute band on earth can match. The group will be performing sets both Thursday and Friday night, with Thursday being one of their famous Pink Talking Fish Are Dead sets, where the talented players will be incorporating Grateful Dead songs into their already insane setlist!