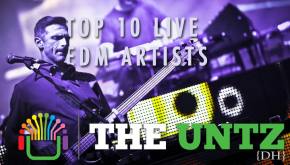 HUGE DISCLAIMER before you starting reading this article and judging our choices. This isn’t just a list of the top electronic artists to see in concert, or the best DJ’s to watch press buttons. This is big boy stuff, for the real men (and women) with instruments in their hands.
Within this list are some of the greatest electronic artists who combine the synthetic sounds we love with drums, horns, guitars, vocals, and devices you can barely fathom to create a precise sound based around Bill O’Reilly’s famously stated mantra “Fuck it! We’ll Do It Live.”
These artists take big risks and have reaped huge rewards in doing so, storming all possible boundaries to be like their rock counterparts of old. Leaving more room for human error, yet also allowing unlimited space for human awesomeness.

Simon Green (Bonobo) is a man of many talents. Beyond his extraordinary ability to produce majestic soundscapes, he is a modern day conductor of stunning, ethereal live sets that grip emotions like none other. While he’s gently slappin’ the bass and playing around with sample pads, the rest of the band follows his lead and combines endearing vocals, guitar, drums, and keys to create touching performances. You may have seen a Bonobo DJ set, but the live experience is a whole ‘nother story.

Long before Adam Deitch was embarking on tours with Pretty Lights and releasing music on his record label, the legendary musician was drumming for a band called Lettuce. You may have heard of them. If you haven’t, we suggest getting right on that. Deitch and Borahm Lee have now shifted their efforts towards Break Science, fusing hip-hop beats with tantalizing production in the electronic department. Live shows packing the energy of a thousand winds, poised on leaving audiences awestruck from the very first note.

Attending a GRiZ or Gramatik show is an unforgettable experience. Each musician throws down in their own respective way, pummeling eardrums with visceral instrumentations that make people dance like it was the 80’s. Put them together, and you’ve got the greatest combination since Michael Jordan and Scottie Pippen, or even Karl Malone and John Stockton. Saxaphone, face-numbing bass, and Eric Mendelson’s funky guitar; something you don’t want to miss.

Amidst all the bullshit that constantly surrounds our world, the news of Pretty Lights touring with a live band was a bright spot in our day. We take that back, in our year. First we received A Color Map of The Sun, PL’s genre-smashing release that basically reinvented the art of sampling, and now he’s embarking on a whole tour surrounding the concept. There are some videos online along with his groundbreaking performance on Conan, but we’d do anything to catch a Pretty Lights live set with our own two eyes. Derek Vincent Smith FTW.

Conspirator is a sonic dream team. Combining members of The Disco Biscuits, RAQ, and Pendulum, the mind-blowing supergroup pushes the limits of electronic music with a gung-ho, rock ‘n’ roll mentality that leads to venue-rattlin’ performances. Their uncanny amalgamation of beauty and beastly might take some by surprise at first glance, but within seconds we guarantee you’ll be drifting off while aggressively bobbin’ your head. Badass, right? We think so.