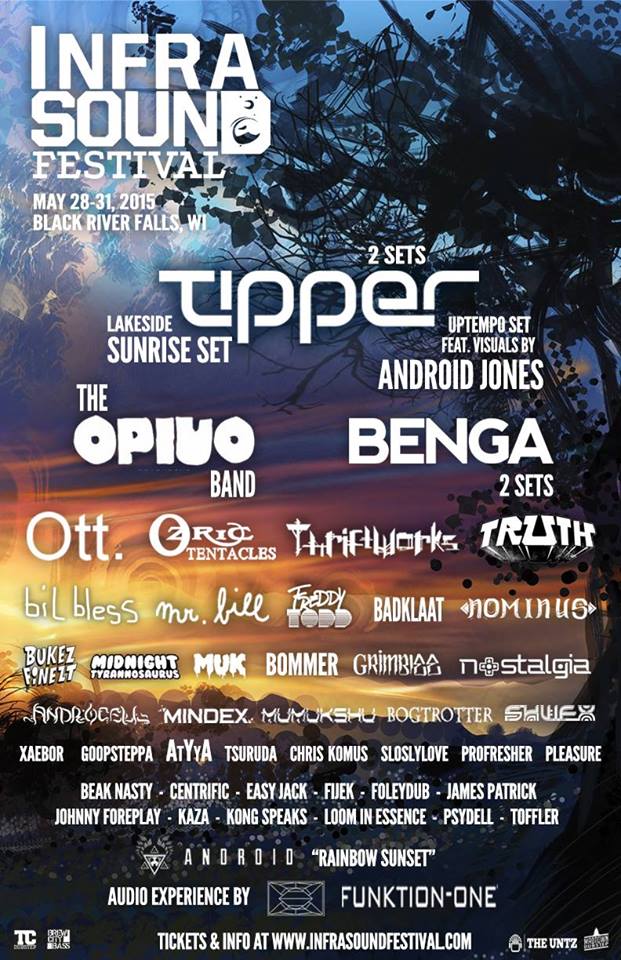 They did it again.

Just when you thought Infrasound Music Festival couldn't top itself, they go and assemble an incredible lineup of left-field acts and sonic crowd pleasers.

The biggest name that stands out, and the one that always has a home at NCN Campground in Black River Falls, WI is Tipper, who will be performing an uptempo set alongside wildly invention visual artist Android Jones, as well a special lakeside sunrise downtempo set. Jones, himself, has special plans for a rainbow sunset, which is sure to be mind-blowing in its own right.

The other big name that stands out to us is The Opiuo Band. With much anticipation as to who exactly makes up the members of Oscar Davey-Wraight's band, one thing is for certain: it's going to get funky in central Wisconsin the last weekend in May.

What absolutely blows my mind, and proves the Infrasound organization's music nerdery (and ability to do the impossible), is that Ozric Tentacles will be performing at this year's summer festival. FRIGGIN OZRIC TENTACLES!?!?! Who else has them on their lineup?

On top of that incredible "get," several more marquee names have found their way onto the lineup, including Benga (2 sets from the dubstep legend), Ott, bil bless, Mr. Bill, Thriftworks, TRUTH, and Nominus. Then they just went nuts with Freddy Todd, Badklaat, Bukez Finezt, and Midnight Tyrannosaurus.

These guys can't be stopped!

Possibly the biggest story of the year is that for the first time in recent memory, Infrasound will not be the same weekend as Wakarusa, so no more difficult decisions have to be made.

Tier 1 tickets are available for just $120 at infrasoundfestival.com.