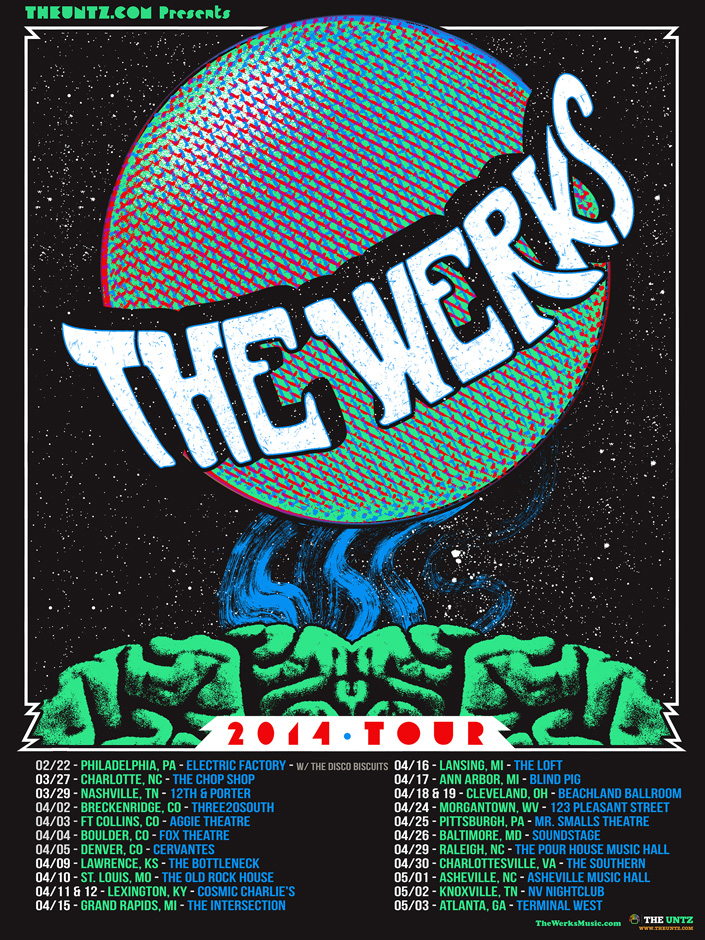 Blurring lines and blending genres, dance rock hybrid The Werks takes to the road once again in 2014. A banner year, which included major tours spanning both coasts, long runs in the band’s heartland haven, and an impressive display at their fan-centric festival, The Werkout, put the Ohio-based quartet in prime position to take things to the next level in the coming year.

Beginning January 30, The Werks will springboard their tour opener in Athens, OH into a string of northeast dates with post-rock/electro-jam pioneers Lotus. The two-headed tour will swing into Vermont, Massachusetts, and New York, before closing out the run in Connecticut. Then it’s back to the midwest before the four-piece dons board shorts and heads off to the beautiful beaches of Best Fest in Costa Rica, where they’ll join Conspirator and Gramatik as headliners. A huge Valentine’s Day blowout at the Georgia Theater in Athens, Georgia leads right into a double-dip at fan-favorite AURA Music Festival February 15-16 in Live Oak, FL.

Once again, The Werks mount a prime Colorado run as the snow melts in April. Breckenridge, Ft. Collins, and Boulder and lead up to a big play in the state capital, and the epicenter of dance music culture in the US. The last time the band hit Cervantes Masterpiece Ballroom in Denver, they spearheaded a Sonic Blossom sellout, once again putting the genre-bending act at the center of the electronic revolution.

April is filled to the brim with a ton of dates covering the country east of the Mississippi. Up, down, and all around. The quartet screams into the southeast to close out its spring tour just in time for festival season.

This winter/spring tour will be presented by electronic and dance music news and events outlet, TheUntz.com. Longtime supporters of the livetronica movement, The Untz is thrilled to put The Werks in front of die-hard dance music fans—the fastest growing segment of the band’s fan base—stunned at the sound of this live band improvising infectious grooves on the spot with real instruments.

Fan club pre-sales can be snagged at thewerksmusic.com. You can also visit the site for their complete listing of tour dates, videos, and archived recordings and setlists from past shows. All Werk, all play—never a dull moment.