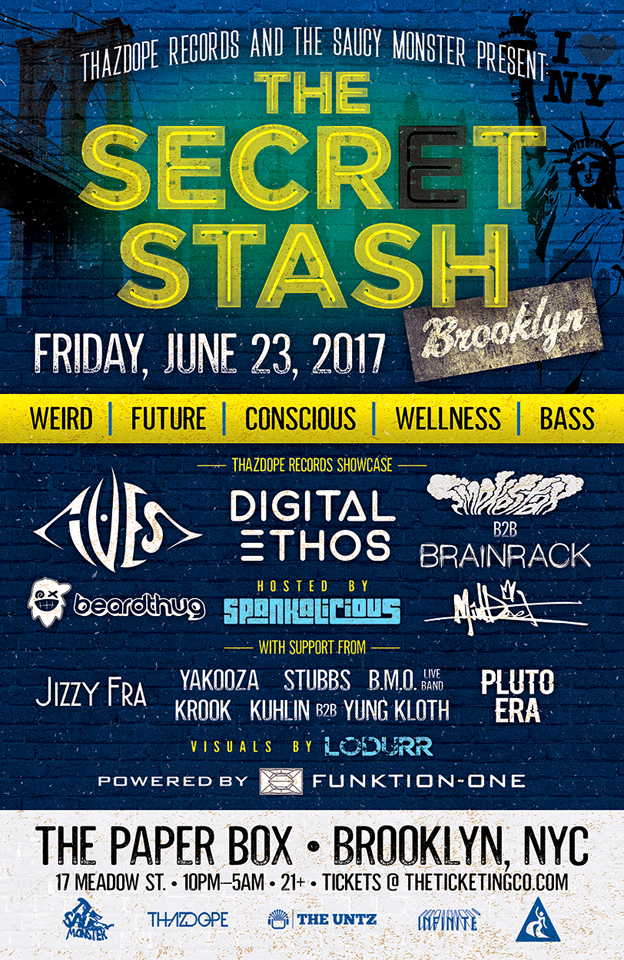 All we knew before was that Spankalicious would be hosting the stage, and LoDurr would be bringing his patented killer visuals to the mix, but now we know some of the key members making this one as special as The Secret Stash Miami, which sold out during Miami Music Week with a nutty midnight to 7am party in the Wynwood area of the party city.

Joining the fracas are eastern and southeastern bass rising stars Ives, DIGITAL ETHOS, Smokestax B2B Brainrack, beardthug, and mindset. Having had the pleasure of Digital Ethos, Smokestax, and beardthug wrecking The Untz Festival sets, we know that fans are in for a treat in just a couple weeks.

Also in the mix are Jizzy Fra, Pluto Era, and young guns Yakooza, Stubbs, B.M.O. live band, Krook, and Kuhlin B2B Yung Kloth. It's an all out basstravaganza powered by those sweet, sweet Funktion-Ones in the heart of BKNY, going late 10pm to 5am for the 21+ crowd. There are also going to be plenty of rad vendors, wellness speakers, and all those extras that make ThazDope parties go off. The Saucy Monster is also getting on board to make this dream a reality.

Tickets are up now at theticketingco.com and you don't want to make the mistake of missing out on those. Ask the sorry ass fans who got locked out of The Secret Stash Miami...