As bassheads trek into Hampton, Virginia from all points south, north, and west for this weekend's event, all eyes are on an upstart crew that has begun to make waves in the state. Responsible for some well-promoted and eclectically booked events in central and northern Virginia, as well as partnering up with some bigger fish in the region on larger theater and festival dates, The Bassment steps into the spotlight this Labor Day Weekend as they stepped up to the plate with the wildest assortment of after parties we could imagine. 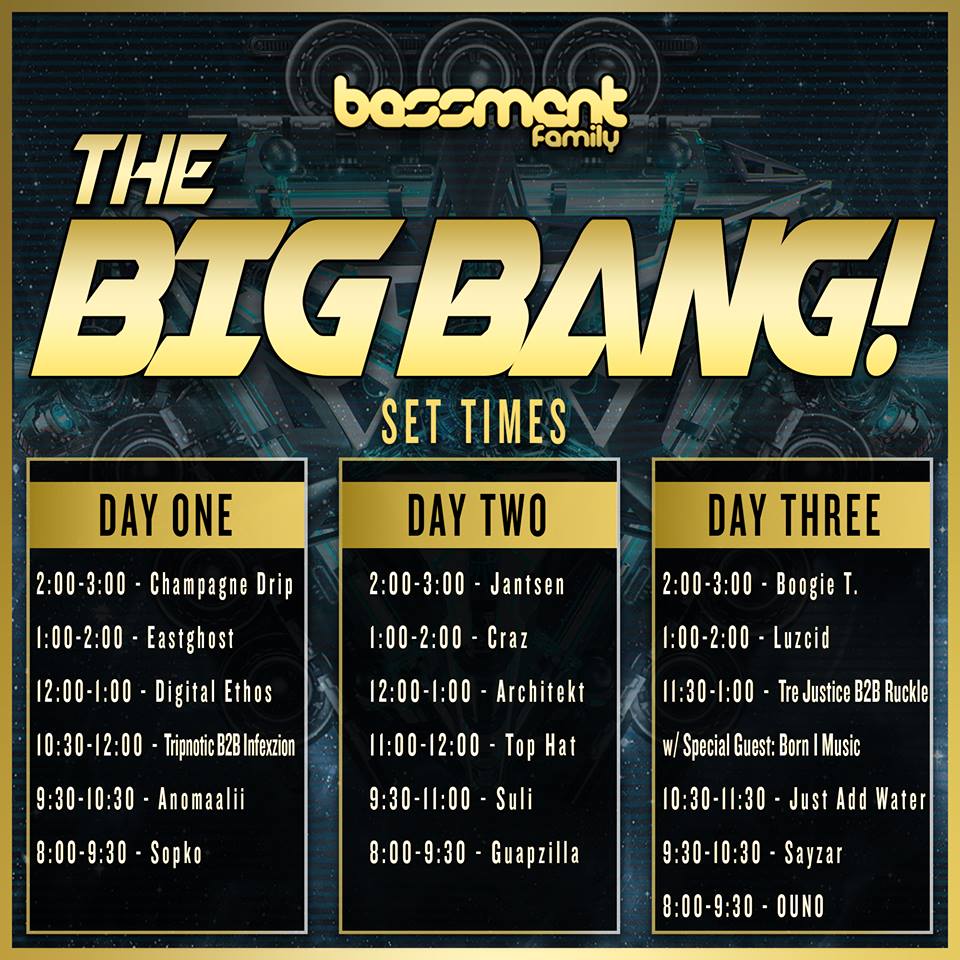 Taking place September 1-3 at PBR in Hampton, coinciding with one of the biggest bass events of the year, The Big Bang! touches down tomorrow and doesn't let up until early Monday morning with an exciting array of up-and-comers we expect to see headlining that big building down the block not too far in the future.

Friday's festivities kick into gear with someone very familiar to attendees of The Untz Festival this past June. Philly's DIGITAL ETHOS hits Hampton ahead of a slew of dates with Space Jesus this fall. Fans will recognize EASTGHOST of west coast STYLSS fame, and of course Champagne Drip, the alter ego of dubstep legend SPL.

Saturday packs a punch with longtime Bassnectar collaborator Jantsen heading up a battalion of young talent in Craz and Architekt. Then the biggest bang of all hits Sunday night when Wakaan young gun LUZCID (just off his smash EP, HYPNAGOGIA) leads right into SubCarbon's Boogie T, who has been on an absolute tear through the mainstream and underground worlds with his guitar-fueled bass music mayhem.

The Bassment was founded in 2014 by Tre Justice, who has made himself a force to be reckoned with in the mid-Atlantic both on stage and behind-the-scenes. Handling day-to-day duties for The Bassment Family is Chief of Operations Matt Rocholl, who DJ's under the name Ruckle—fans will actually be treated to a Tre Justice B2B Ruckle set as one of the final performances of the big weekend with special guest Born I Music. With a full staff of marketing managers, graphic designers, and street teamers, The Big Bang! is a coming out party for this hustling crew has big plans for central Virginia and beyond.

“One of our main goals with The Big Bang was to curate a well rounded bass music experience filled with acts that don't come through our area often. We also, as a result, wanted to provide a safe environment focused on community for everyone to keep the party going whether they are in Hampton, VA to attend Bass Center X or not,” Rocholl adds. “We are very excited to see all the smiling faces and to spread awareness for The Bassment Family to bassheads from all over the country!”

Early bird and advance tickets are long gone, and online DOS price tickets are just about to close, so you better hurry or take your chances at the door. Visit bassmentfamily.com to get the full scoop.