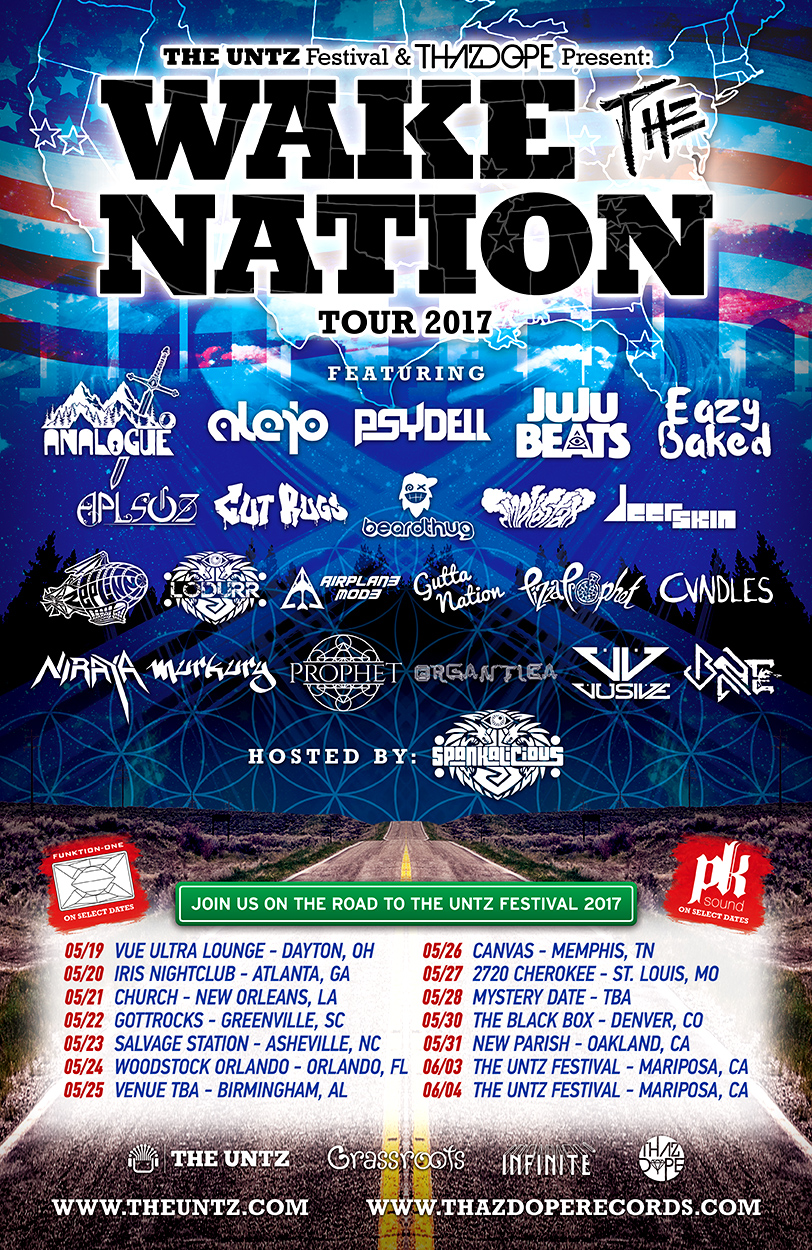 Just when we thought our love affair with ThazDope Records couldn't grow any stronger.

Announcing the Wake The Nation tour, bringing ThazDope young guns across the country from the midwest to California, culminating in two nights at The Untz Festival on their very own stage.

Fan favorites Alejo, beardthug, Psydell, Eazybaked, Deerskin, and more will be caravaning from Ohio down in to the southeast, hitting spots across the Plains and into Colorado before darting to Wormhole Wednesday in Oakland with more of our partners from the festival, and then up to Mariposa, California on June 3 & 4 for the festival.

Label chief Spankalicious a.k.a. Kevin Moore was over the moon to share the details of the tour, which he calls the biggest thing he's ever done. “It's important that we start this off in the home of the Trifinity,” Moore makes mention of Dayton, just down the road from Piqua—home of Yheti, Toadface, and tour member Mt. Analogue. “The ties between the ThazDope crew, The Untz Festival, Yheti—who will be performing his sunrise set on our stage—they're strong.”

Certain stops are even more special because of the various roles of all the members. Murkury, Airplan3 Mod3, and Zeplinn will be hosting the Asheville stop as The Undergrowth. The Plains have Aplsoz, Gutta Nation and Cut Rugs rep Tennessee, and Bane The Dragon holds it down for Florida. You've even got two Prophets to choose from: Pizza and original flavor.

“We'll have PK Sound on the east coast,” Moore adds, “then we'll link up with our Funktion-One rig out west and roll that into the festival.” Spanky will be hosting each of these dates with his irreverent take on life, the music industry, and love, and we'll be riding their wave of excitement from May right into June.

Check out the massive Flux and Heterodox compilations that really serve up some of these ThazDope stars on a platter for you. You're gonna dig what you hear.