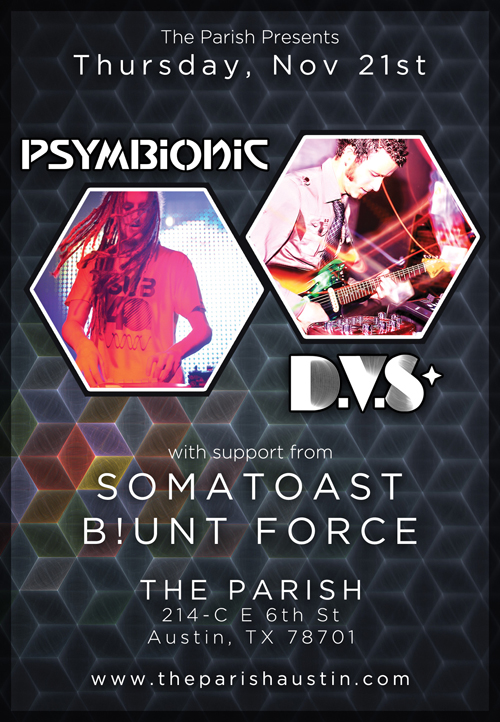 Austin’s homegrown soundscape artists and bass engineers, Psymbionic, D.V.S*, Somatoast, and B!unt Force made a statement last month with their townie takeover at The Parish. The night radiated a local vibe with undertones of something grander on the verge of erupting, as it showcased local raw talent and contagious creativity. The talent of Thursday night’s lineup exemplified electronic music with substance; all four guys produce and perform their own original music, keeping the show far from the average DJ set.

Psymbionic (AKA: John Burcham) is definitely going places above and beyond Austin, as his set last Thursday reflected his signature style of craftsmanship; bending genres to incorporate a plethora of goodness. From funk, to glitch-hop, and even some classic rock, Psymbionic kept it fresh, fun and full of bass all night. Most live music junkies know that an artist’s on-stage presence can make or break a set, and Psymbionic was a blast to watch crank out the jams as he genuinely seemed to be having a great time. D.V.S. joined Psymbionic on stage with his guitar at the end of the show, and the dynamic duo hyped up the crowd as they rocked the fuck out together.

D.V.S. (AKA: Derek VanScoten) is pure magic to watch on stage as he rocks out with his electric guitar and mixes in fresh beats and remixes.  A live instrument exponentially adds to the EDM experience, and D.V.S. does it right. His set was a well-designed balancing act of classic style and new age beats, as he produces all of his own original remixes to tracks like “Because” by The Beatles.

Somatoast and B!unt Force staged a fantastic kick off to the evening, as they both produce their own original danceable music in completely unique ways. Somatoast brought his consciousness expanding, organically electronic soundscapes. B!unt Force kept the crowd dancing and on their toes, as he incorporated the live music element into his genre bending set; he played the guitar and mixed in everything from hyphy bass to an electric bluegrass sound.

In addition to euphonic pleasure, the night also hosted aesthetic treasures. As most nights, an extraordinary scene of live painters via Third Coast Visions lined the walls of The Parish to create a multi-dynamic creative experience. All in all, the night was a reminder of how much talent is about to explode out of the beautiful city of Austin, Texas.