Although there were a range of reactions after the Lotus show on Wednesday night, the overall feeling was a sense of euphoria. Everyone had smiles and satisfied eardrums when the show ended and the Westcott emptied out. Concertgoers seeing the livetronica/post rock for the first time were impressed by how easy it was to rock out and dance along to the music; while devoted fans debated the merits of this performance and lineup versus dozens of shows past. Some expressed delight at opener Moon Hooch's set – with their two saxophones and hypnotizing. Either way, not a single body could stand still as the Philly act serenaded their crowd. 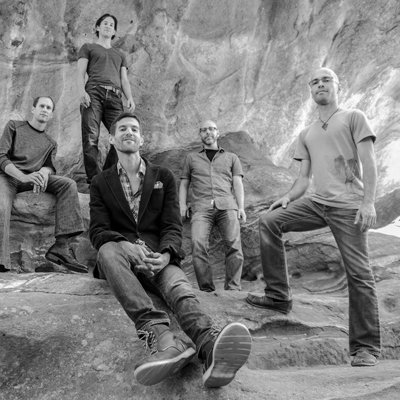 For a Westcott show, the lights and production were phenomenal. Behind the band stood five rectangular blocks that projected colors of light and shapes, further engrossing the spellbound crowd. Lotus is well-known for putting on a spectacular light show, paired with group improvisation based on the reactions of the crowd. As a result, the Westcott show – although not their best in the opinions of devoted fans – proved no less the quality of their live performances. The multi-genre band incorporated elements of rock, electronica, jazz, jam, and funk in their unique and upbeat show. One of the climaxes of the concert was seeded in the moments when they played tribute to video game music and broke down to Zelda’s theme song. The crowd went crazy and the band jammed with huge grinning smiles on their faces.

The band formed in Indiana in 1999 but is now based in Philadelphia and Denver. Their sound started off with the same improvisational styles as Phish and the Grateful Dead, heavily leaning towards sounds of funk, rock, and jazz. The result is a flawless performance both in production and talent – which was successfully carried out at the Westcott.

The best part of live music is when the artists focus on not only their connection with each other, but on the crowd as well. Lotus follows that in every detail; and if anyone were unsatisfied by Wednesday’s show, that’s only because their expectations of the band are sky high – and rightfully so.