Strap on your safety belts, because it's about to get bumpy. With the exclusive premiere of "The Gargon" earlier this week from Liquid Stranger, comes the visual companion listed directly under "synergy," when you pull out the old Merriam-Webster tome. 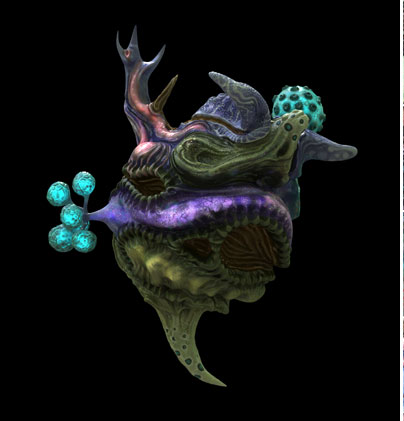 Martin Stääf once again collaborated with Melbourne-based visual artist Andy Thomas. The wildly imaginative 3D animator (among other things) has spent his career blending the natural with the digital. Taking high-resolution video of every type of vibrant ecosystem, Thomas then manipulates these organic settings with bizarre, otherworldly creatures plucked straight from the dark recesses of the minds of Wells, Verne, and Lovecraft.

Bulbous anemone shapeshift into many-tentacled predators, enveloping and ingesting schools of shimmering phytoplankton. The gnarled limbs of a mandrake hide a glowing cavern, teeming with armies of phosphorescent gnats, billowing in waves of thick, radioactive clouds.

The lurching, meticulous, and ethereal nature of "The Gargon," matched with the primordial stew gives the listener the sense of being a prehistoric voyeur, watching the nature take its course as it plucks various eccentricities from the priomordial soup and slaps a probscis on this beetle, and gives that amoeba wings. It's a dimethyltryptamine divergence by the producers of the new Neil Degrasse Tyson-helmed Cosmos.

Journey further into the lush, nebulous soundscapes of Liquid Stranger with The Renegrade Crusade EP, due out April 15th on Interchill.