To most residents of Orange County, today is just a typical Thursday.  But for the few thousand people in the know about this gem of a festival, there is excitement in the air.  Lightning in a Bottle (LIB) returns for the 13th summer throwing down what is best described as a celebration.  Equal parts art, music, yoga, self-expression, and respect, there is something for everyone at this festival.

A major difference between LIB and many other music and art festivals around the nation is that LIB is a “Leave No Trace” event.   There are signs everywhere to remind attendees that “LIB” also stands for “Leave it Better” and “Leave it Beautiful”.  There are very few waste bins on site since people are expected to pack out their own trash.  Where there are bins (near food vending areas), there are detailed “Waste Sorting Guides” explaining how to sort between the 3 bins: Compost, Recycle & Landfill.  Additionally, these stations are staffed to ensure bins are used correctly.  There are also free filtered water stations all around the festival grounds to reduce waste from disposable bottles.  The “Green Mission” of this festival is very clear and a practice that is embraced within the festival community.

LIB attendees start their experience at the box office at Santiago Canyon College where the lines are not too long (props to the Do LaB for the much improved organization this year).  A relatively painless experience and off to the festival grounds where there is this buzz of energy of people on a mission; schlepping gear, setting up camps, working on art projects, building stages, constructing vending booths.  With a little “May Gray” fog hanging around, the weather is perfect because it never got too hot while everyone did what they had to do.  As more people continued to arrive and settle, in every direction there are smiles and hugs among people finding their friends, making new friends, and relaxing into the festival vibe.

The only music on the schedule today is some live music at the Cafe Stage starting at 8pm.  But at the Woogie Stage 70’s, 80’s and 90’s house remixes started in the later afternoon and continued well into the next morning. People are emerging from the newly built tent city in fun furry costumes, wearing face paint, and ready to start this party. As it got dark, the lights, glow toys and dance parties are creating a burning man vibe in the lower campground.   Happy voices are singing along to some familiar tunes coming from the Woogie Stage remixes such as, The Clash’s “Rock the Casbah” and the Beastie Boys “(You Gotta) Fight for Your Right (to Party!)” in tribute to the late great MCA—Adam Yauch.

For EDM fans, there is a lot to look forward to over the next few days with headliners including: Bassnectar, The Glitch Mob, Shpongle, Tipper, Big Gigantic, EOTO, NiT GriT, Minnesota, Gramatik, Michal Menert, Opiuo, R/D, Random Rab, Govinda, Sugarpill, and so much more.

Somewhere before 5am the camps became silent.  There is a sunrise guided meditation at 5:45am for those that were awake at the Meditation Temple.  And then came the rain.  It is a cool, damp, misty morning.  Festival grounds are quiet as people linger in their tents staying warm and dry.

By the early afternoon, the sun is peeking through the clouds and more and more people are coming out.  Hoopers, twirlers, and dancers spread across the lawn at the Bamboo Stage where Quade is on stage providing a fun mid-tempo groove blending dub with spooky and tribal sounds.  Quade made their first appearance during the summer of 2009 at the Moontribe Anniversary and have been performing along the west coast.  They describe their music as “Midtempo Omni-Genre Bass Fueled Electronica for the Dancefloor”.  A great set to start off the electronic beats on the Bamboo Stage.

Meanwhile, on the hill next to the Bamboo Stage, an artist is building a zen garden with recycled items like crushed beer cans and bottle caps.  There is a constant stream of people in the Marketplace shopping for fun festival gear.  This is the place to be if you are in the market for huge feathered headdresses, glowing fur bra tops, leather accessories, and many other unique items. Over at the Woogie Stage there is a completely different vibe as Tim Herrlein drops some hard house beats.  Someone is blowing bubbles which are floating over the large dance party where there are lots of smiling people getting down in the sun.

Up the Lumi Hill, with gorgeous views of the big blue lake, surrounding tree covered hills and colorful lower campgrounds; CelloJoe set up across from the picnic tables and is playing some beautiful mellow tunes on the cello over the sounds of a relaxing looped drum beat.  CelloJoe’s sound is as unique as any singing, story-telling, beat-boxing cello player that you could imagine.  He uses his cello and his voice to create layered live music without using any pre-recorded samples.  A small group forms around him as he performs in the path between the Workshop Temple and the Lucent Temple Stage.

A woman walks around handing out flyers to “Join the Grid: One World. One Heart. One Consciousness” for the upcoming Unity Ritual at the Temple of Consciousness Workshop Stage just a few feet away.  And just around the corner at the Yoga Temple, there are hundreds of people lying on their backs in Shavasana where a DJ is playing a track of calming “Om” sounds.  It is truly magical to explore the festival grounds and encounter new experiences that expand the heart and mind.  But enough about the scene, you get it, it’s gorgeous, it’s peaceful, it’s a party.  Let’s be honest, you are here for the EDM, right?  So, let’s get into it…

It is 5pm and Kalya Scintilla from the land down under is performing at the Bamboo Stage. This artist describes his style as a cross over between dubstep and glitch-hop with Middle Eastern influences.  Thousands of people are dancing to the tribal beats coming off the stage while two gorgeous belly dancers take turns arousing the crowd.  This is a smooth sweet groove with quick transitions to heavy bass.  The tempo shifts back and forth creating a unique mix that has the crowd getting down--a really enjoyable set.

Still at the Bamboo Stage, next up Colorado-based producer Michal Menert is on stage with drummer A.C. Lao.  Menert grew up with Derek Vincent Smith of Pretty Lights and was the first artist signed to the record label Pretty Lights Music in 2010.  This set is a mix of down tempo, glitch hop and samples.  A definite crowd pleaser.

It is just after 7:30pm, the sun is setting, and Gramatik, also of the Pretty Lights Music label, continues to expand the energy at the Bamboo Stage.  The crowd has more than doubled over the last couple hours and is clapping along to a skillfully layered mix of Dubstep, Glitch & Hip Hop beats.  The glow toys are out and the light show begins.

It is 10:30pm and Shpongle (Simon Posford) is the main attraction at the Lightning Stage.  As expected, the lawn is packed for “Shpongle featuring The Masquerade.”  The set takes off into the characteristic psychedelic downtempo genre Shpongle is known for.  DMT smells are wafting through the crowd.  The visuals become mesmerizing and ever-changing.  Thousands of eyes are watching the screen while the music is getting into everyone’s heads.  The beats start to feel like a heart beat throbbing in your ears.  The music moves from heads through bodies which become channels for the spiritual sounds turning this entire scene into some kind of intense psychedelic world.  LIB has been “shpongled!”  Simon Posford takes a quick break to say what up to LIB pulling the audience back into the conscious world.  Shpongle remains undefined in the realm of infinite genres but nonetheless continues leaving the listeners wanting more.

Back at the Bamboo stage, Minnesota is dropping heavy beats mixed in with Adele’s “Rolling in the Deep.”  Christian Bauhofer (aka Minnesota) of Santa Cruz, CA is a producer and DJ known for fusing melodic dubstep and glitch-hop with the intention to create fine-tuned sounds that will win over any crowd.  This is a great set with plenty of bass and melodious moments that keep the audience locked in.  The light show enhances the music during this high energy performance which leads right up to midnight where they quickly turnover the stage to NiT GriT.

Danny Beall (aka NiT GriT) of San Jose, CA is a dubstep, drum & bass and glitch producer in the thriving West Coast bass music scene.  He bounces onto the stage full of energy ready to throw down his set.  Smoke machines and blue green lasers are creating a visual experience for the crowd.  It seems NiT GriT enjoys interacting with the audience while smacking them in the face with some heavy bass.  Near the beginning of the set he says he is playing unfinished Pizza Party tracks (NiT GriT’s side project with Stephan Jacobs).   During the intro of “Love Songs” he says, “I dedicate this next track to all the beautiful ladies out here tonight”.  And a few minutes into the song he says, “Are you guys still with me?”  Safe to say there is a huge crowd and nobody is going anywhere when the music is this tight. 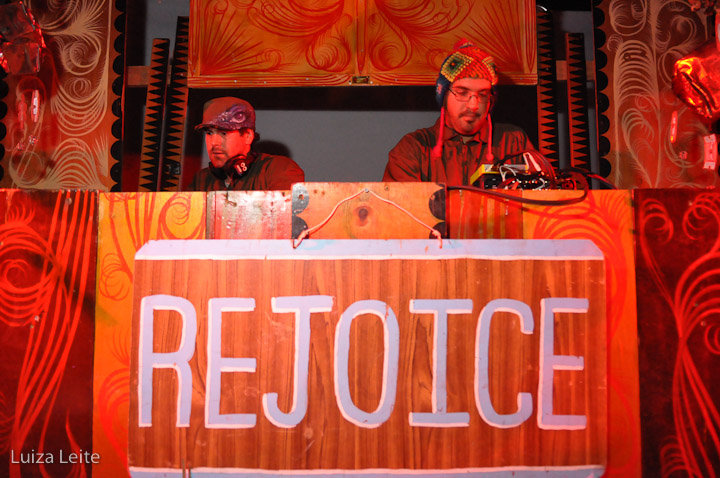