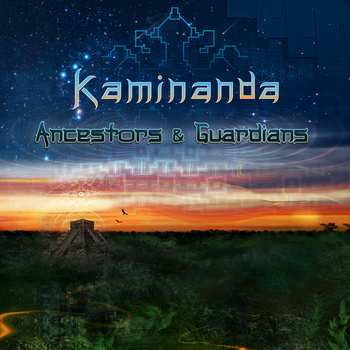 In homage to 2012, a prophesized year signifying the dawn of expanded intelligence and heightened consciousness, producer Kaminanda releases a new ethnic infused psy-hop album: Ancestors & Guardians. Another adventure in tantric downtempo, this sexy musician summons relics from our ancient world heritage in tandem with a cosmic, futuristic essence. The cover art illustrates a stepped pyramid in the Yucatan, which cultural legends describe as an energetic storehouse or antenna, superimposed with digital patterns and geometric designs of white light. Both the visual art and aural soundscapes suggest a union with practices from across the ages, as well as a connection from our earthly abode to a heavenly realm.

Blurring the boundaries of sound perception, many of this album's samples begin as indigenous instruments, or vocal tones, that are then stretched and manipulated into digital, glitchy synths. Sounds starting off as something earthly and familiar, are smoothly transformed into electronic and alien. 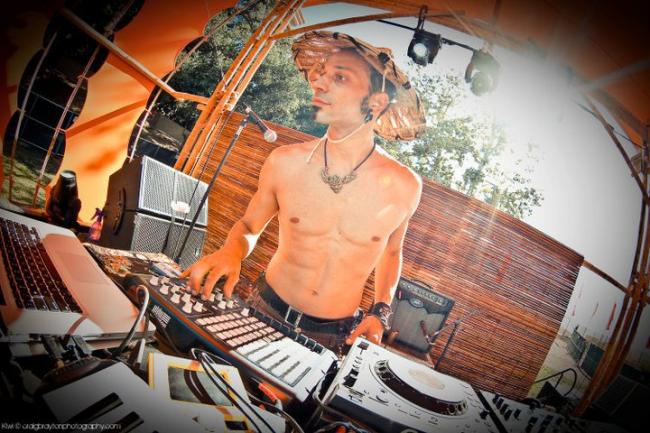 Who are the "guardians?" In the music we can perceive them as otherworldly sentients, portrayed by these electronically manipulated sounds; Theremin warbles, cosmic panning chords, "dial-up" beeps and "tune-in" waves. And the "ancestors?" Musicians of antiquated cultures; Tuvan throat singers, Chinese zither players, Baroque divas, and indigenous drummers. The under laid percussion of this album features a variety of jungle drums, and when I say "jungle", I don't mean drum 'n bass, but mimics of skin headed percussion played by hand, and accompanied by seeded shakers. Combined with quips of tropical birds and rushing waters, this album creates a mysteriously exotic feel woven into the fabric of psychedelic hip-hop.

If you want a less cryptic, direct message of intent from the producer, tune in to track six, “Time Travellers.” It features the only use of words in the album's entirety, so listen closely. The spoken word is in alignment with Kaminanda's stated mission to "...perform music that uplifts the spirit of the listener... while tapping into the unlimited realms of adventure, beauty and elevated states of consciousness." Other stand out numbers include “Moonlight Tango,” based upon the sultry Argentinean dance (imagine if Gotan Project got whompy), “Liberation” with a forlorn metal ballad guitar solo, and “Guardians of Virtue,” serving up a slice of dub reggae.

Kaminanda's skills surpass that of just DJ/Producer, and venture into the realm of well practiced musician. Many of the instrument parts-- keyboard, guitar, and didgeridoo-- are laid down by his own talent. The vast spectrum of musical eras, genres, and instruments that are sampled throughout the album also give insight to his musical knowledge. Several of the tracks, however, are owed to the teamwork of supporting musicians including the Time Travellers and Atreyu, Kaminanda’s young son.

Released this past January on the auspicious date 1/13/13, Ancestors & Guardians, is hosted by Merkaba, Kalya Scintilla’s label. The label supports a variety of forward-thinking, feel-good, do-good, artists, who view the dance floor as a vehicle for healing. Connect to your inner source of cosmic primalism and open yourself to the many possibilities of a spoonful music.