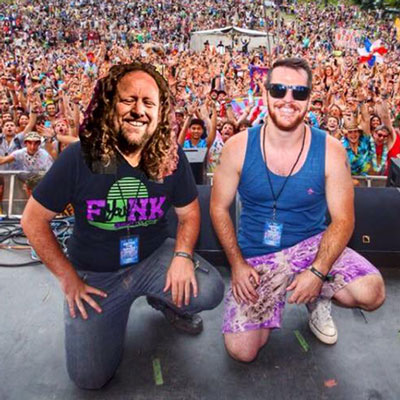 This weekend, fans at The Peach Music Festival will be treated to a special substitution. As Mark Hill of The Floozies becomes a father, Jason Hann of The String Cheese Incident will sit in for the dad-to-be drummer. Hann is no stranger to live electronic duos, anchoring EOTO with fellow String Cheese bandmate Michael Travis for more than a decade.

The festival started last night and runs through Sunday at Montage Mountain in Scranton, Pennsylvania (home of Camp Bisco). The Allman Brothers-themed event features Gregg Allman, a special Gregg Allman Incident with SCI, longtime bassist Oteil Burbridge, and a slew of other jam acts with Umphrey's McGee, moe., The Werks, and more.

Mark and his brother, guitarist/producer Matt Hill, have a busy late summer schedule culminating in their first Red Rocks headlining performance in Morrison, Colorado on October 8th alongside Michal Menert & the Pretty Fantastics, SunSquabi, and Russ Liquid. We will soon be posting the audio from our panel with Mark Hill of The Floozies recorded at Electric Forest earlier this summer.