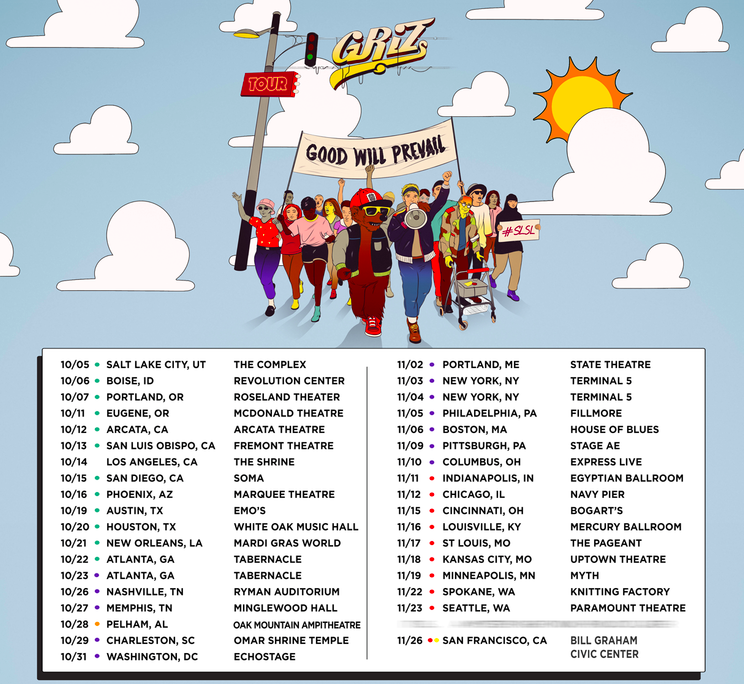 Get your dance pants on!

GRiZ’s new Good Will Prevail album is sure to make you feel groovy. The Michigan-bred, Boulder-based producer born Grant Kwiecinski, released 13 tracks to zealous fans on September 23 and now he takes Red Rocks tomorrow for his second headline appearance (which sold out in about 48 hours).

On a completely different level from, let’s say, Mad Liberation, this is very much a “feel good” compilation of tracks. Whereas Mad Liberation shows off Grant’s heavy roots with powerful basslines, he has been slowly but surely making the transition into what is now a less aggressive, but equally intense Good Will Prevail era.

Can we say whether this new tone is better or worse? Not really. Without a doubt the heavy dub will be missed, but regardless GRiZ is extremely talented in the world of funk, saxophone, and synthesizers. “Can’t Hold Me Down” – that’s for sure – just makes you want to bounce to the steady beat. The dub and wub wubs we all know and love shine through in “My Friends and I,” created in collaboration with ProbCause.

“Rather Be Free” featuring Muzzy Bearr – one of my favorites – is the rendition of heavy bass perfectly mixed in with live instrumentals, something he pulls off successfully. Throughout, GRiZ maintains that balance between his softer side, jam band vibes, funk, and throws in synths of a dubstep track.

Seems GRiZ has given his eager fans a sweet taste of what’s to come as his career progresses. Right on, man. The future of funk is in your hands.