Cory Wythe, or as he’s known on stage, Marvel Years, is a young producer/DJ making a lot of noise (both literally and figuratively) in the EDM scene. Often compared to Pretty Lights, Wythe’s tracks are lengthy, funky, and always have your head bobbing and your foot tapping—the perfect kind of sound for a music festival. Rightfully so, Wythe will be performing at the Gem & Jam Festival in Tucson next month. We caught up with him about his experience with the festival as well as what he’s been up to this past year.

You’ve been recognized by many for your affinity for guitar. How do you incorporate the instrument to your music not only in the studio, but also at live shows?
Guitar has always been part of my musical vision since I was a kid so incorporating that into the music that I produce was inevitable. I try and find a balance between the production aspect of it all and the addition of the live instrumentation on top of that, not allowing one to over power the other but instead have a balanced ratio between the two. During my live shows I choose to play guitar over certain songs while I let other songs go untouched, firstly because it is difficult to live mix while consistently playing an instrument that requires the use of two hands, and secondly because I don't want to over-saturate the crowd with it. I like starting the show out as a normal producer but then pulling out the guitar and surprising the crowd as the show progresses. It's a really cool feeling to see the crowd's reactions and show people that there is still musicianship involved within every aspect of electronic music.
You were recently featured on Pretty Lights’s A Color Map of the Sun remix album, and you opened for him late last year. What was it like working with an already prominent figure in the industry?
It was a massive step forward for me as an artist to be able to work with Derek [Vincent Smith] and gain some insight and knowledge on how to navigate your way through this industry, and also the opportunity to gain exposure and pick his brain was extremely helpful.

It must have been so exciting touring with GRiZ. What was your favorite part of your stint with him?
The after-show shenanigans and downtime with the crew were the most memorable moments from the tour.
What artists would you say inspire you the most when you’re in the studio?
A lot of my inspirations come from the music I grew up on and the classic rock influences that I've had over the years, which when listening to my songs you can pick up on distinct similarities to those that were prominent 30-40 years ago. 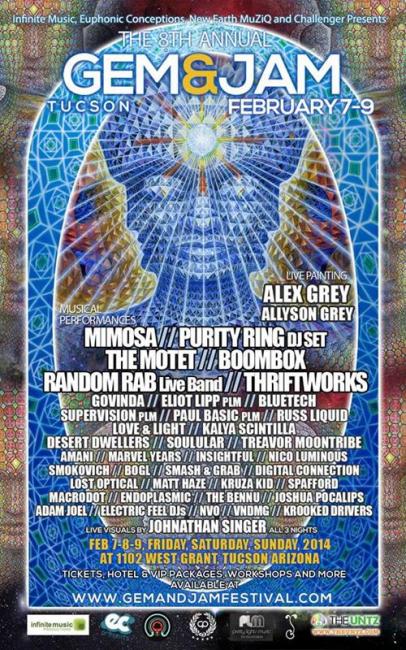 You’ll be playing at the Gem & Jam Festival in Tucson next month. How excited are you to be featured in the festival?
I've been stoked on this festival for the last couple months now and I can't wait to throw down with the crowd down there.
How is it different preparing for a festival set rather than your average show?
There is not much of a difference, I try and bring as much energy and excitement as I can to every show that I play. Playing a festival just drives me to kick that energy up a notch and give the crowd a good time whether they came knowing me as an artist or showed up having no clue who I am.
Who are some of the artists you’ll be jamming to at Gem & Jam when you’re not performing?
Definitely want to check out the Random Rab live band, I also would like to check out some artists that I have never heard of before this festival. Also will be checking out the PLM homies.
True to the name, Gem & Jam is known for mixing music with art, including gems, jewelry, and minerals. Do you plan on spending some time checking out all of the stimulating pieces of art?
Definitely!
After Gem & Jam, I’m sure festival goers will be drooling at the possibility of seeing you on their favorite festival’s lineup. Do you plan on being very active during festival season this summer?
Hopefully this summer I can make it to as many places as possible and give people the opportunity to hear the music and really see what we're doing live.
In little time you’ve already made a splash in the EDM scene. What’s next for Marvel Years?
Just keep pumping out new tunes man and hope that my career and musical vision will continue to evolve around that concept and spread to as many fans as possible. That and also aiming for a grammy nod by the end of 2014, so keep an eye out for that.