We're knee deep in rave culture at The Untz.

In our mission to cover everything under the sun that pertains to electronic and dance music, we promote, attend, review, examine, poke, prod, and kvetch about the massive arena bills with stacked lineups of repetitive EDM drivel that pound, pound, pound, until the ground is littered with crushed plastic water bottles, glowsticks, and cigarette butts. Maybe we're part of the problem. Who knows?

For that reason, we have tended to gravitate, both as people and as an organization, to the transformational side of the festival spectrum. We're hippies at heart, that's clear enough. Some of the senior staff put in their fair share of time in the underground warehouse parties of the 90's, but for the most part, we crossed over from the jam band and festival world after one too many Particle and Pretty Lights late night sets sold our souls to the dark side.

Trust me, there's plenty of bad shit going on in the jam scene, too. It's not too pretty over there, either. But we'd like to think that the best people from both worlds got together and said "We can do this better." 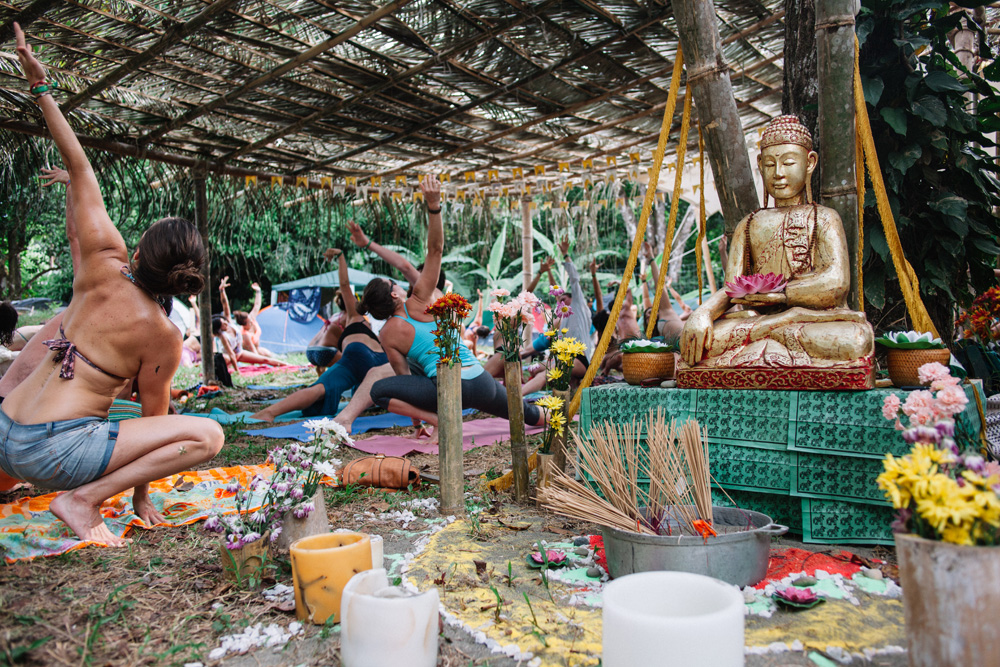 I don't have to define "transformational" for people, anymore. The word has taken on a meaning of its own. Which can mean its being bastardized and misused, and it's the flavor of the month like "organic" or "free range," but it also means that people are at least making an effort to pretend that their event is more than just a crazy party in the boonies.

Perhaps we should trash the word, altogether. Don't even bother recycling it.

Each year, the entire staff of TheUntz.com patiently waits for February to roll around. Before the hubub of festival season, an intimate gathering occurs on the beautiful southern Pacific shores of Costa Rica. Except the secret's out now, isn't it? 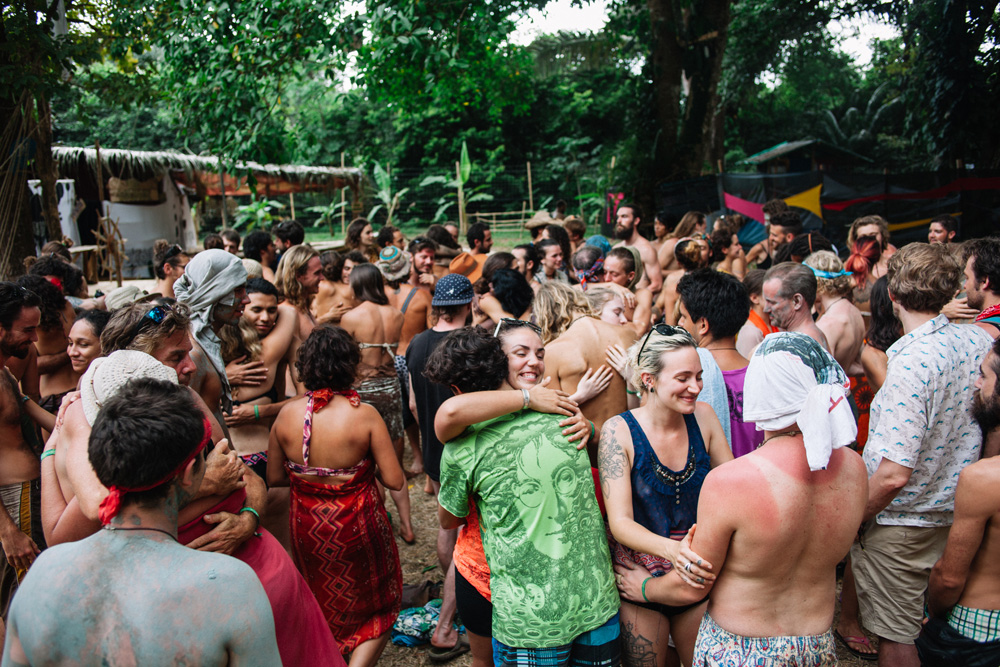 For the first time in its five-year history, Envision Festival sold out. I don't mean it lost its way and followed the dollar signs in its eyes down the wrong path. I'm talking hordes of weary travelers marching up and down Route 34 in Uvita, Costa Rica begging for any extra tickets. We're talking thousands of music, yoga, and culture fanatics cramming into Rancho La Merced for a weekend long exploration of the body, mind, and soul.

Or just there to party, right? Maybe.

I'm not going to pretend that everyone who made it down to Puntarenas at the end of February was there to heal the world, change lives, fix the planet, yada yada yada. Of course some people just went to hang out, listen to good music, and splash around in the ocean. I'm not that naive. But what is most astounding is the number of people who did and do want to fix the planet.

I had the great pleasure of hosting a number of panels on-site at the festival, as I've gotten the chance to do at a couple of events around the country. Mostly, I just shoot the shit with musicians and make jokes. It's fun, it's silly, it is what it is. But this year at Envision, I surrounded myself with activists and advocates; people on the frontlines of making a difference. For the first time in my life, that old mantra of "party with a purpose" that had been floating around at all these transformational events I attended actually became crstyalized for me.

I had the great fortune of hosting a panel with Janine and Ken Jordan of the Electronic Music Alliance, Stephen Brooks of Punta Mona, and Ryan Rising from The Polish Ambassador's Permaculture Action tour. Janine has taken it upon herself to bring the transformational ethos to the commercial festival world. She's trying to bring the environmental and sustainability initiatives of the greener realm to these massive blowouts that take place on a much larger scale. Meanwhile, she's fighting tooth and nail to repeal the old Rave Act, and allow promoters to throw their parties without fear of facing federal level drug charges. 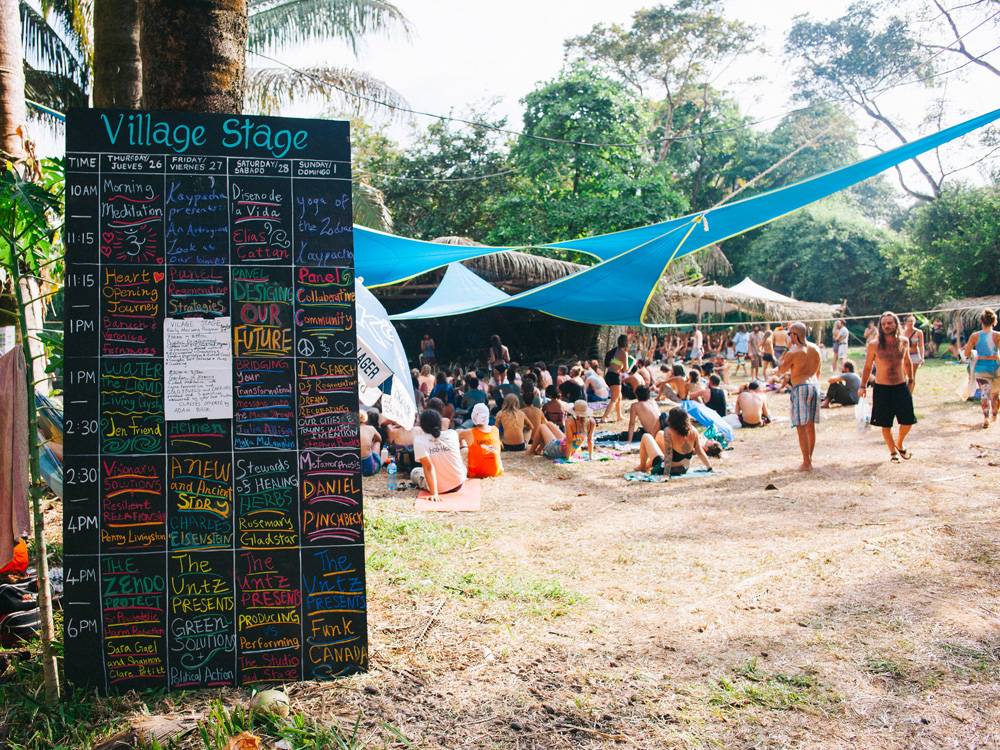 Ryan is an absolute gem of a guy. Articulate and inspirational, he's the real figurehead for David Sugalski's big permaculture events. Before the festival started, he was able to bring a hundred festivalgoers to three schools around southern Costa Rica and in one day lay the foundation for these functioning community gardens.

And what can I say about Stephen Brooks? He could talk about shit all day--literally. We had the most engaging conversation about the compost toilets Envision had installed on-site that replaced the chemical facilities we all know and loathe. One of the most intriguing figures I've met in my travels, to be sure. He even made an impassioned pledge to Envision attendees to not go all out every night. Sure, they could party a couple nights, but take some time, and take it easy--be present.

You know what's the craziest thing? People listened. When he said "We're going to go plant 50 trees!" a huge group of people followed him out of the gates, boarded up the bus, and by gum they planted 50 trees. When Daniel Pinchbeck (whose book Breaking Open the Head is the reason I even started attending these types of festivals) told people to think deeply and examine what it is that brought them to this point, people listened. When Charles Eisenstein told us to reexamine the way we see money, and use it as a tool, people listened.

I'd like to think that I'm impressed by those who flock to Envision because I've set the bar so low. I'd like to think it's because I'm truly inspired by my fellow festivalgoers who care so deeply about the music on one hand, but know that it's not everything--there's a whole world out there that can benefit from the joint efforts of a few dreamers who crave so deeply that everyone be given the chance to live and love that they have. I get so lost in the music I forget that it's just a piece of the puzzle.

Envision reminded me of that this year. And it reminds me of that every year. It truly is possible to party with a purpose.