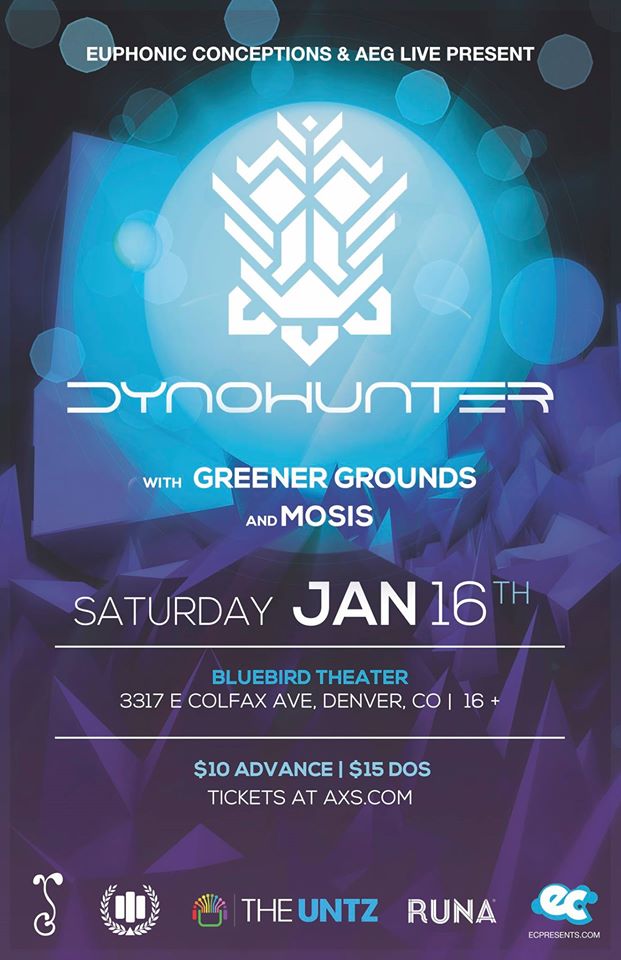 One of our goals with The Untz Festival was to honor the relationships we've held since the beginning with cutting-edge acts. We've been thrilled to watch the ascent of DYNOHUNTER from Boulder, CO live electronic darlings to full-fledged touring juggernaut. Thousands of miles and hundreds of sets later, the band has really found its sound and blazed its own trail. Today we're thrilled to premiere the trio's progressive new tune, and chat with the guys about what's new for them in 2016.

For years, producer/sax man Clark Smith, bassist Fred Reisen, and drummer Justin Ehmer have been fighting the stigma of jamtronica acts being decades behind the contemporary sounds of the rest of the electronica world. With "Justified," they are able to hop right into the thick of the house resurgence with a dark and dirty tribal tech smash that flies in the face of what people think livetronica acts can do. Sexy, subtle, and sonically unimpeachable, we wouldn't be surprised if established house DJ's started dropping this gem into their sets.

On January 16 at the Bluebird Theater, Dynohunter will enjoy its first big headlining play in Denver, CO. They'll be joined by fellow The Untz Festival act Greener Grounds, as well as Mosis. Euphonic Conceptions and AEG Live are teaming with The Untz to bring Colorado fans the new era in the band's evolution.

I got a chance to chat with the guys about the band's evolving sound, bridging the gap between house and techo and livetronica, and what new fans of Dynohunter can expect from its set at The Untz Festival.

Love the new track, "Justified," which has a straight ahead tech house sound. Does that represent a new sonic path for Dynohunter, or were you just having fun?

Yeah, definitely. Over the past couple years we have been really trying to figure out how to differentiate and just be something out there that is unique and real and a breathe of fresh air. Coinciding with that was our growing interest into the worlds of house and techno. Deep grooves, funky bass lines, psychedelic otherworldly vibes, and all night parties--what is not to like, right? For us being a band that can bring those authentic house and techno vibes to the world of live/jam music is something we strive for. Breaking down barriers, taking influence from new and unique places and above all making our music an experience people remember and connect with, is what we are all about. 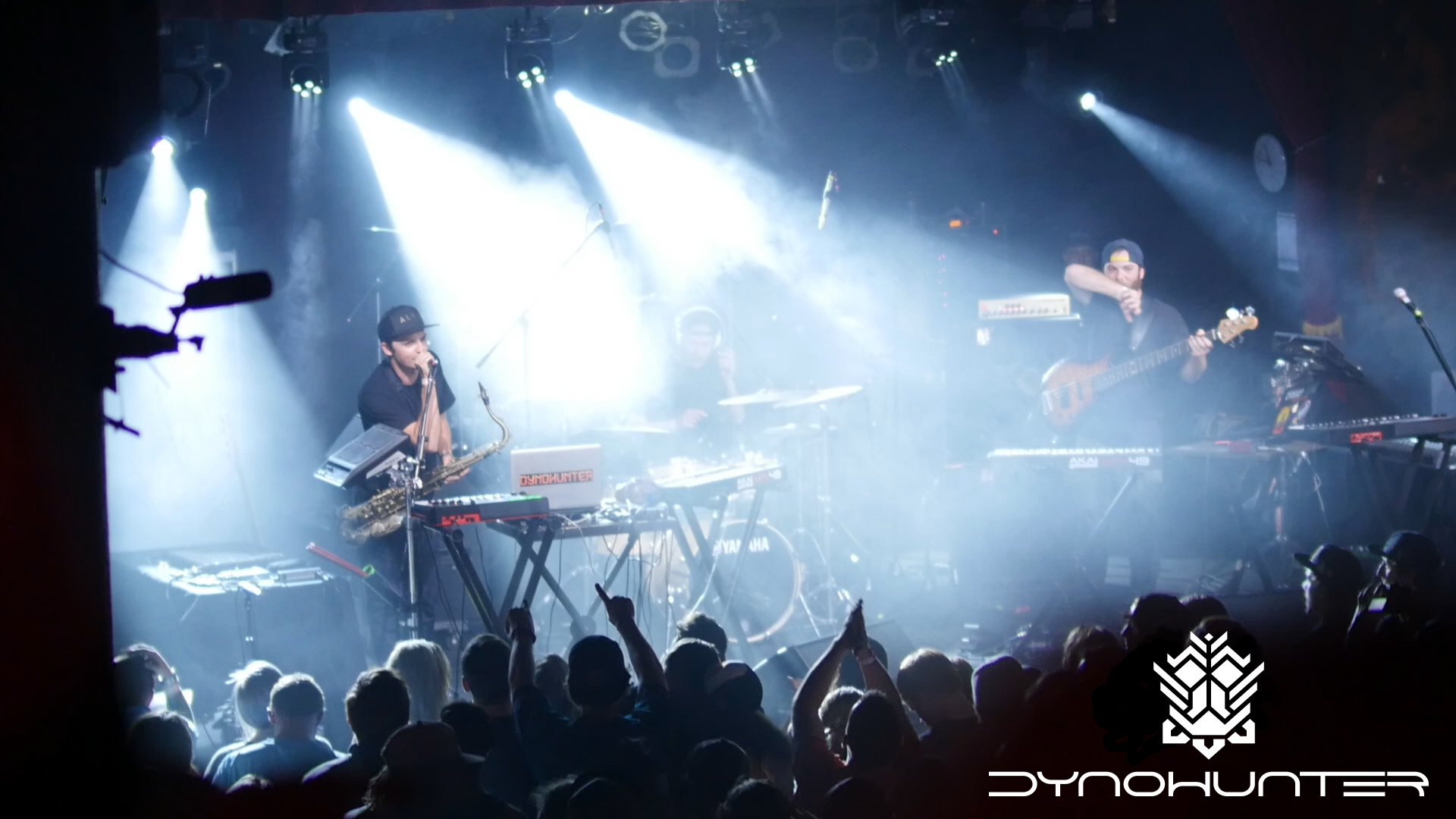 Across the board, the band is really conquering these hip, niche genres. Are you trying to make a statement about what livetronica acts can do?

Partly, yes. As far as delving into the realms of house and techno we just see the parallel with that and jam/livetronica music. For instance the long intertwining sets of music that take the listener on a journey. Having the focus be on the progression of sound and vibe and less based on track to track wow factor. As we mentioned in the first question we just feel that bringing a real take of what great house/techno producers and DJs do to people who love long jams and hypnotic grooves is a natural step. We know that some people don’t necessarily equate house music with jam bands on the regular but that is one stereotype we would like to break down. In some ways we feel there has been too much homogenization act to act lately and there is just a need for people to push in different directions, try new things and be true to themselves and their journey.

Who are the bands or producers who are really turning you on right now? Is there an artist who is really fueling the latest Dyno sessions?

Too many to choose from. When we sit down to write music we often don’t think about writing a “hit” track but more what our live set needs to become more complete and a deeper journey. In that sense listening to diverse producers and acts has helped a lot. Maybe a good list to give is the albums/sets that have been in the rotation while we have been on tour Clark has been listening to a lot of techno/house stuff guys likes Maceo Plex, Joseph Capriati, bunch of stuff from the Toolroom Records, and he has been bringing those influences to our tracks. Fred has been vibing on Booka Shade, Hot Since 82, Colombo. Lots of stuff with great moving bass grooves and a nice bounce to them. Justin has been taking a bunch of influence from artists like Eric Prydz and Alex Niggeman or producers on the Moda Black label and recently has been listening to Black Coffee and his BBC Radio 1 essential mix. That essential mix is fucking great with tons of awesome percussion and such a legit flow. But together we really listen to all of what is mentioned above and try to draw influence from all of our favorite parts. However, we definitely aren’t just listening to electronic music, always gotta have balance. We just played in Telluride and on the drive we listened to (checking the Spotify archive) Toro y Moi, Jaco Pastorius, Miles Davis, Deadmau5, Ween, Jon Hopkins, Phish…..You probably get the point.

Which artists at The Untz Festival are you excited to catch? Any diamonds in the rough fans should know about?

The Untz Festival lineup has some great diversity. Acts from all genres and all parts of the scene. We have always enjoyed Crywolf and he seems to really be coming into his own. Evanoff is from our home town and definitely onto some legit stuff. Also just seeing so many friends from the Mile High Sound Movement will be out there with us is a trip. Speaking of which we all know that Unlimited Gravity and Project Aspect will throw down hard. Mr. Bill’s set at Sonic Bloom in 2014 blew Freddy’s mind and he still won’t stop telling people about. But honestly everyone is going to bring a great energy because that's what you guys at The Untz are all about, so we feel like its all gonna be gravy.

What can fans expect from your live set at The Untz Festival? Especially those who haven't seen you in a while, or will be seeing you for the first time.

People can expect tons of new and unreleased music. We have been really honing in the live set to make it more cohesive and more engaging. On top of that we feel like we are coming into our own in the vein of house/techno meets livetronica. We are reluctant to say it but it almost feels like the dawn of Dynohunter 2.0 is upon us!

You can catch Dynohunter, along with some of the best in livetronica like The Werks, Turbo Suit, Yamn, Greener Grounds, Transfer Station, and more at The Untz Festival at Mariposa County Fairgrounds in Mariposa, CA from June 2-4, 2016. Visit www.theuntzfestival.com to grab your tickets!