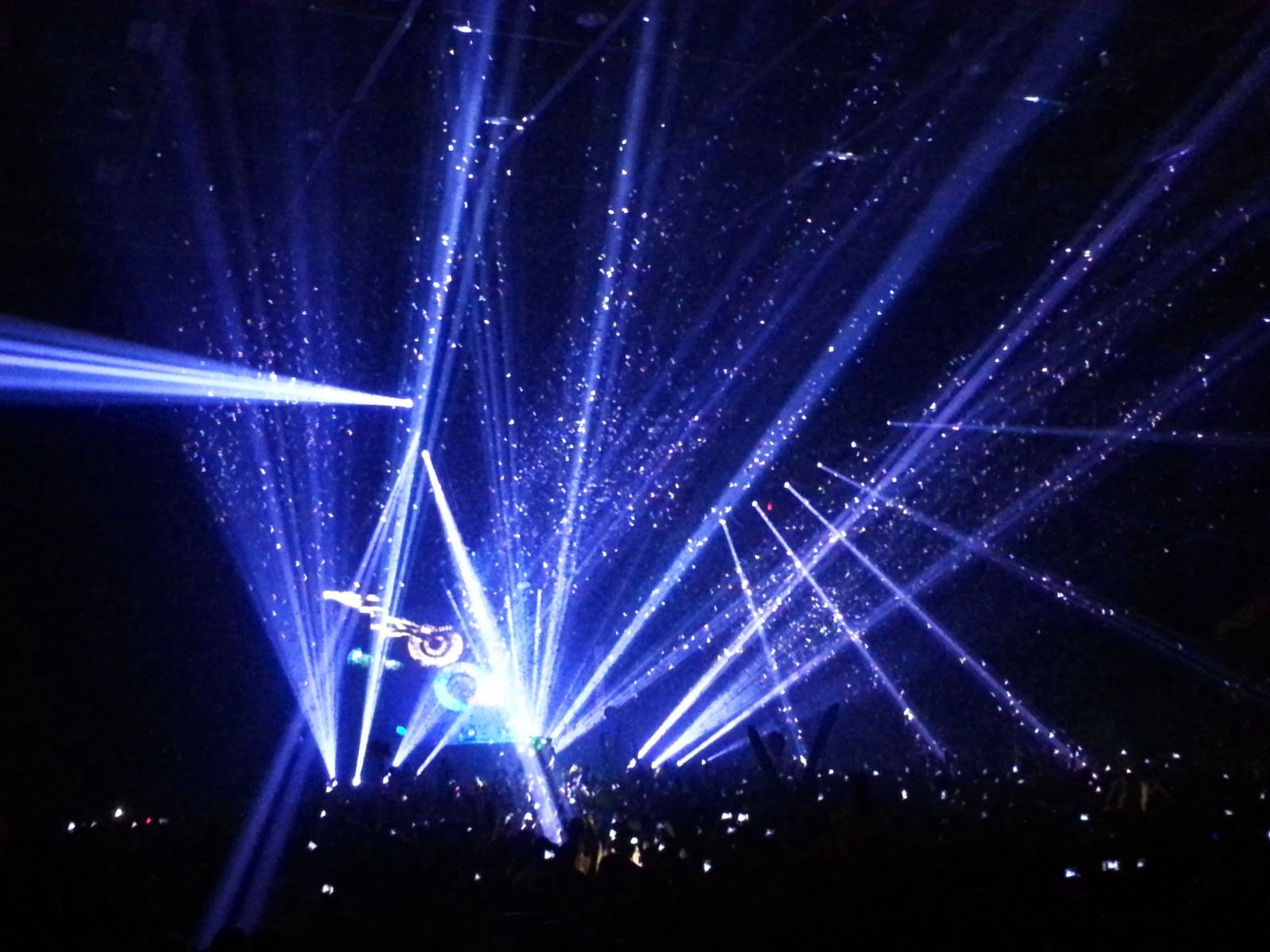 I saw my first Bassnectar show in October 2008 at The Metro in Chicago. Opening for him were Dark Party (Eliot Lipp & Leo 123). I was encapsulated by his contagious enthusiasm, vibrating womps, and mind blowing visuals. It was a struggle to maintain my position near the front when his outrageous set provoked a full blown mosh pit on the dancefloor. Things have changed a lot since then in the world of Bassnectar creatively and performance-wise, and his persona has shifted a bit from “For The People - Youth Unite!” to more of a rockstar diva perception.

But ya’ll can’t deny this dude throws the f*ck down and inevitably controls each crowd with his crushing bass lines, like marionette puppets on a violently-tugging string. I was impressed by his set at Spring Awakening, when all of Soldier Field was abrasively shaking as a sudden downpour soaked all the bassheads until they melted. But anyway, back to the show at hand. The stop on his new Immersive Music Tour took place last week in Bloomington, IL at U.S. Cellular Coliseum. The venue has a capacity of 8,000, yet sold out two weeks in advance.

He started out with an incredibly slow growing buildup, forcing the packed house to cheer and woop in anticipation for him to lay it down. And when he did, that familiar yet unparalleled bass that literally shakes you to your core began and ensued for more than two hours. You know, that deep bass he has so effectively coined, taken to an even deeper and more penetrating level by his advanced sound system. That vibration that works its way up from the ground through your feet and legs, all the way up to your face where it makes your nose itch from the heavy sonic reverberations.

The show took us on a ride through some newly released tracks off his Immersive Music Mixtape (1 & 2) and EP Take You Down, along with a fair amount of lesser played classic Nectar songs as well as some crowd-pleasing faves. There were a few times during the show in which I found myself somewhat unenthusiastic about some of the newer tunes, like they were a bit too repetitive without anything other than the visuals to catch my attention. But for the most part, the show was a rowdy good time. 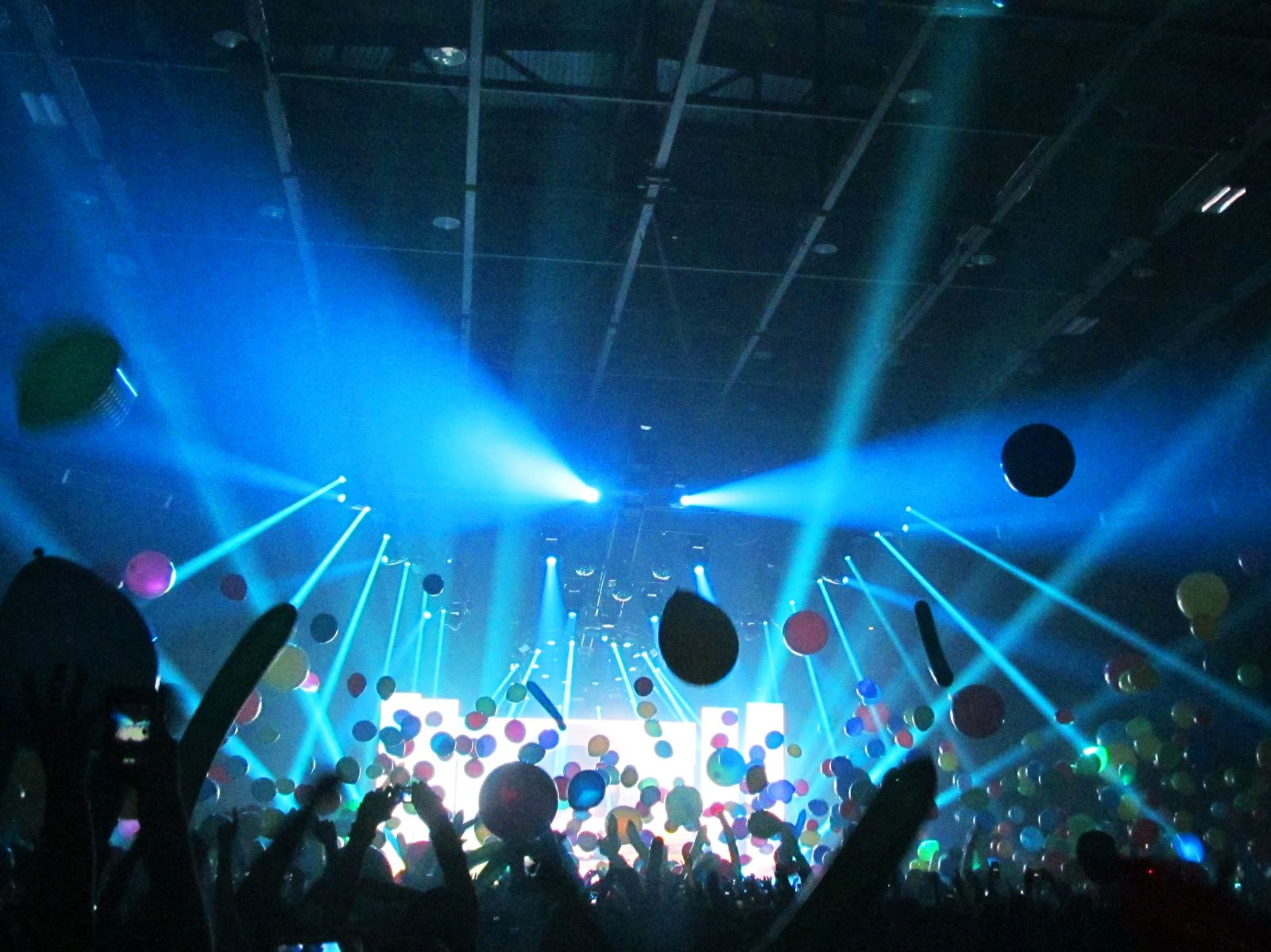 Some highlights include:
- Feeling Good remix that starts off with the slow, melodic voice, “Birds flyin’ high; you know how I feel. Sun in the sky; you know I feeeeel…” which soon exploded into an incredible jazzy bassline that elicited quite the response from the audience. And then...balloons. Hundreds and hundreds of balloons in all shapes, colors, and sizes slowly streamed down from the ceiling. They seemed to fall forever.
- During one of the songs, his visuals began to flash words of encouragement and enlightenment. Each person was staring intently hanging on each word that was flashing across the enormous screen. Statements like “Think for yourself and question,” which reminded me of that original Bassnectar persona.
- A dizzying visual sequence that took many different instances of Alice in Wonderland and her misadventures. As she fell and fell down the rabbit hole, we as the mad people who join for such grungy heavy bass music felt completely at home.
- An always compelling rendition of Rage Against the Machine’s Killing in the Name Of was a welcomed treat.
- A shining track from years ago on which he always delivers, Manu Chao’s Bongo Bong, caused goosebumps to sprout up on the back of my neck and down my spine.
- A gorgeous Teleport Massive blasted my eardrums as images of giant satellites with glittering skies behind them moved and glitched on the screen above him. Pounds of confetti were released from the ceiling, causing a beautiful scene as the lights reflected off each and every little piece of paper.

Bassnectar is currently playing with a new in-the-works sound system, which he plans to have completely finished and polished for his New Year’s show (360 degrees of Nectar anyone?). The new systems allow him to control not just the music, but the video clips as well. Each loop and sound layer triggers the various visuals.

At the end of the day, Lorin Ashton and the Bassnectar experience radiate inspiration. As Lorin said in an interview earlier this year, “Inspiration is not something I really have to work at. It’s pretty automatic...I’m pretty inspired, actually borderline obsessive when it comes to creating. I think about music all the time. I dream about it, so it’s never been like what I can be inspired by; it’s more like massive to do lists.” I once heard him say he would leave himself voicemails when he was out and about and would come up with an idea for a song or a melody.

A man who with each performance creates more than just musical entertainment, but a full-blown experience of the senses that connects the congregation of people no matter how differently they may dress or go about their typical daily lives. This show drew an eclectic crowd, ranging from hippies, frat guys, goths, dubstep girlies in very little clothing, headies, and beyond. We at The Untz embrace each and every one of you mad people. The world of electronic and bass music  is a unique community and has arguably the most diverse following than any other genre. That continues to be one of my favorite aspects of attending a show.