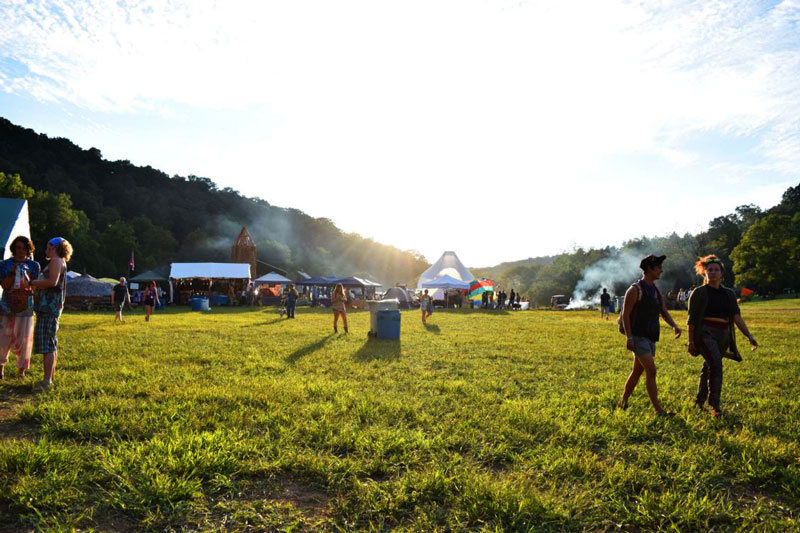 You never know what you’re getting yourself into attending a first-year festival. I followed my bliss to a little slice of heaven south of St. Louis for Astral Observatory, and it was the glorious sonic bubonic luminous microcosm I was hoping for.

The music selection was top notch, handpicked by a crew of entertainment magicians. From beginning to end, each day’s dances flowed seamlessly through fun and impressive genres and performances. There were doses of meticulous techno from Eliot Lipp and a jolt of strange bass from Pleasure. There was plenty of feel-good, inspirational acts like Nahko and Medicine for the People. BoomBox rocked a funky dance party. Papadosio provided a Saturday night jam.

Impressive improv was a staple, with two nights of EOTO (including a sunrise set) and gem of a performance by the Astral Orchestra, which consisted of members of Beats Antique, EOTO, Papadosio, and Eliot Lipp. Pop/crunk/soul/funk/comedy duo BubbleVest threw an awesome, bubble filled party and charmed the crowd. From there a caravan paraded to Beats Antique, who did their thing with a few additional instrumentalists on stage, and of course Zoe Jakes’ belly dancing and huge marching band drum. 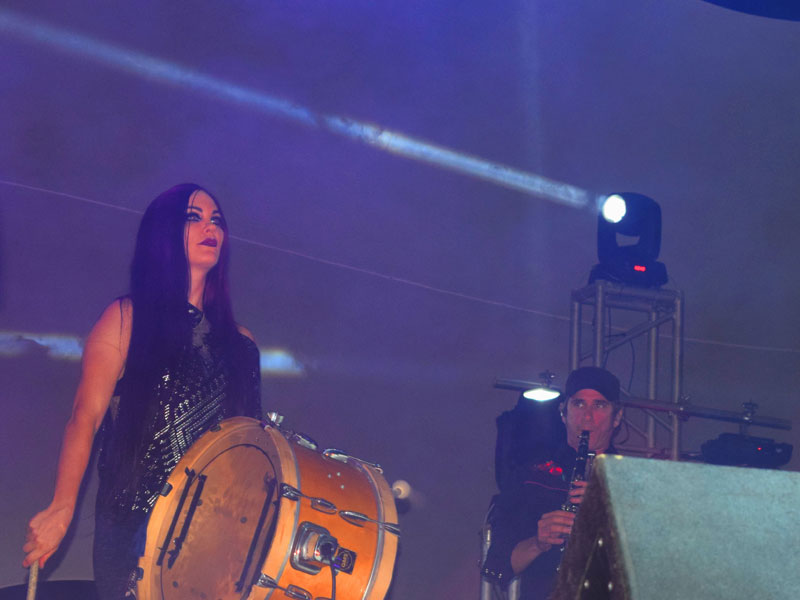 Performers added a robust element to each musical set. From fire dancers to live painters to aerial artists to stilt walkers to a giant puppet troupe, each night was transformed into a full-blown spectacle. The most standout visual moment for me was during EarthCry (Anthony Thogmartin of Papadosio’s side project). I watched from atop one of the structures throughout the valley you could climb for a bird’s eye view.

Beautiful beats wound their way out of the impeccable sound system as at least ten sparkly, meticulously costumed mermaids slowly took the stage, swinging their hips and flowing together. They disappeared from view after dancing for awhile. Then all at once, they came streaming out from either side of the stage into the audience, twirling, smiling, and interacting with everyone. Out came the Astral Gypsies’ giant puppets, whose massive heads and arms were controlled by the person underneath. The puppets paraded through the crowd and the energy just crescendoed into a remarkable human experience. 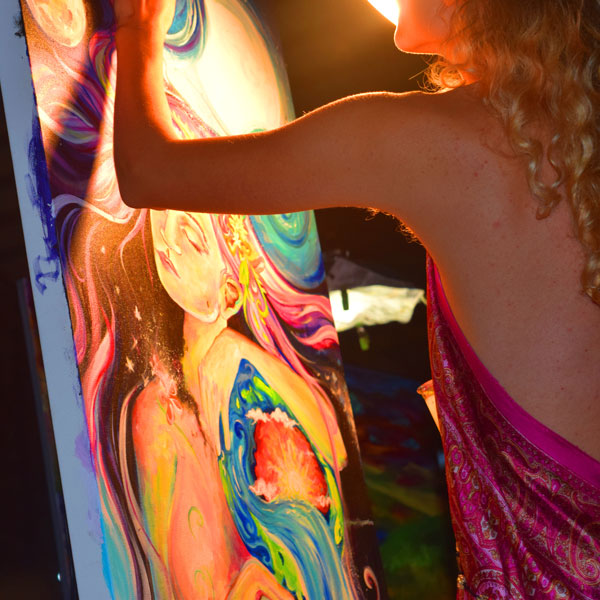 This is just a slice of the cosmic pie that the weekend provided. Astral Observatory achieved that co-creative, community driven idea of making each person in attendance a part of the magic, and not just a patron. As is in life, “The whole is greater than the sum of its parts.”

Over ten visual artists painted canvases and bodies live each day and night, leading to new collaborations and tantalizing creations to lose yourself in. Sacred Circus provided lessons in trapeze, aerial hooping, aerial hammock, and many other skills, in addition to flying and tumbling through the grounds all weekend.

A large hill sitting next to main valley served as an additional camping area. The steep climb was worth it when you got the top, as the already vividly shining stars were even brighter. Three geodomes housed a planetarium, space telescope, and DJ booth for late night sets.

Nooks abounded at every turn...little comfy areas with pillows or hammocks, structures you could climb and lounge on top of, and decorations, paintings, and shiny trinkets brightening every little corner of the trails and valley. A main path wound alongside a small creek, which led through campgrounds and social areas.

An element in abundance each night was that of fire. Between outrageous and jaw dropping fire dancers and fire workers in the valley during the shows, there were small fires at various camp areas that led to many new friends and conversations. At the very end was a large campfire which served as the center of late night jams with different artists from the bill. Flames illuminated parts of the trail, sparkling as we walked back to our “homes” each night. 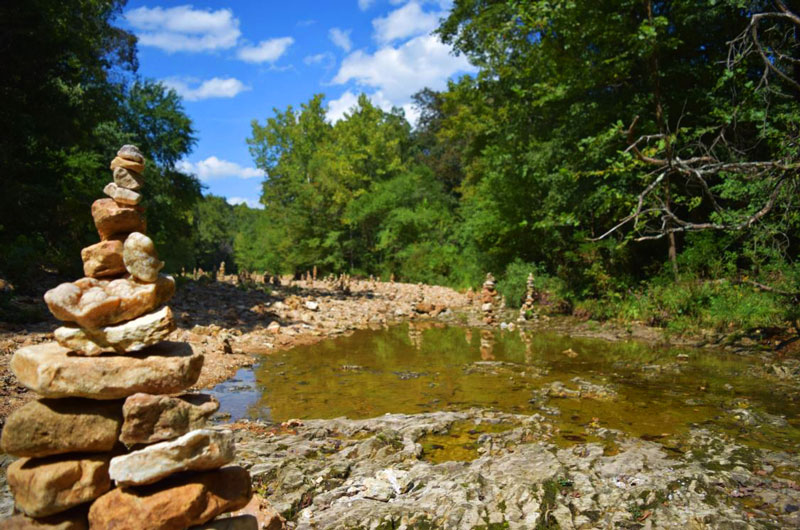 A lovely selection of vendors offered clothing, crystals, and crafts. Delicious food vendors ensured you never went hungry, regardless of dietary restrictions. I won’t soon forget smashing a Hawaiian surf n’ turf taco, or the multiple times my lover and I devoured build your own pizza and mac n’ cheese.

A Lotus Lounge provided healing in the ways of massage, reiki, and more. The People’s Kitchen served as a gathering place for community and food, where volunteers would cook your food for you. A Creekside Lounge offered 40 workshops throughout the weekend, with topics like mandala creation, visualization, water, and permaculture. STL Moontribe presented an Ancient Incubator. Yoga was also offered in multiple practices each day.

As a whole, the event exuded harmony. A lighthearted vibe rounded out by professional and experienced organizers. A space theme spun into the web of the natural beauty of the land, hence the tagline “Where the earth meets the sky.” 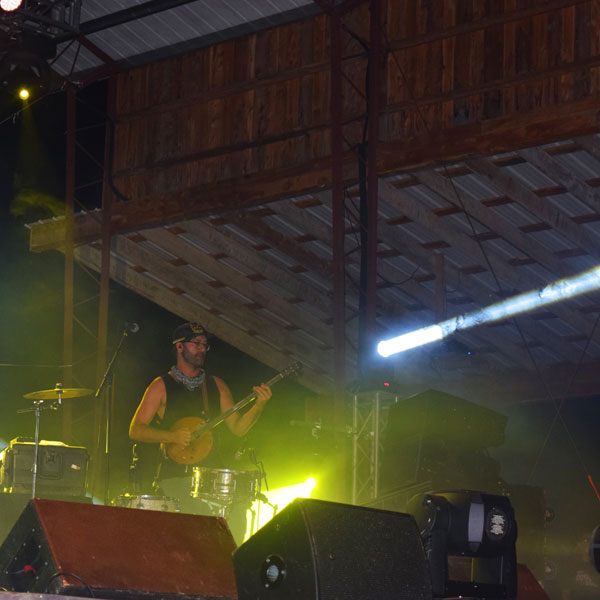 Astral Observatory was produced by Sheena Cox, Sean Smith, and the hard-working folks behind Astral Gypsies who developed the Astral Valley for festivals of this nature. They were supported by the team behind 2720 Cherokee, Loyal Family, and Connector in St. Louis: Eric Noble, Cassie Pope, and Joshua Loyal, as well as countless other volunteers and organizations in the area.

The event itself was forward-thinking in its roster and performances, community values, burner-esque installations, and leave-no-trace policy. The venue transformed into a village for four days, housing a very large and loving family.

Bravo to festival goers, the musicians, the performers, the painters, and coordinators, the volunteers, the workers, and everyone in between. To the readers: add this to your Labor Day weekend plans next year. You will not be disappointed.