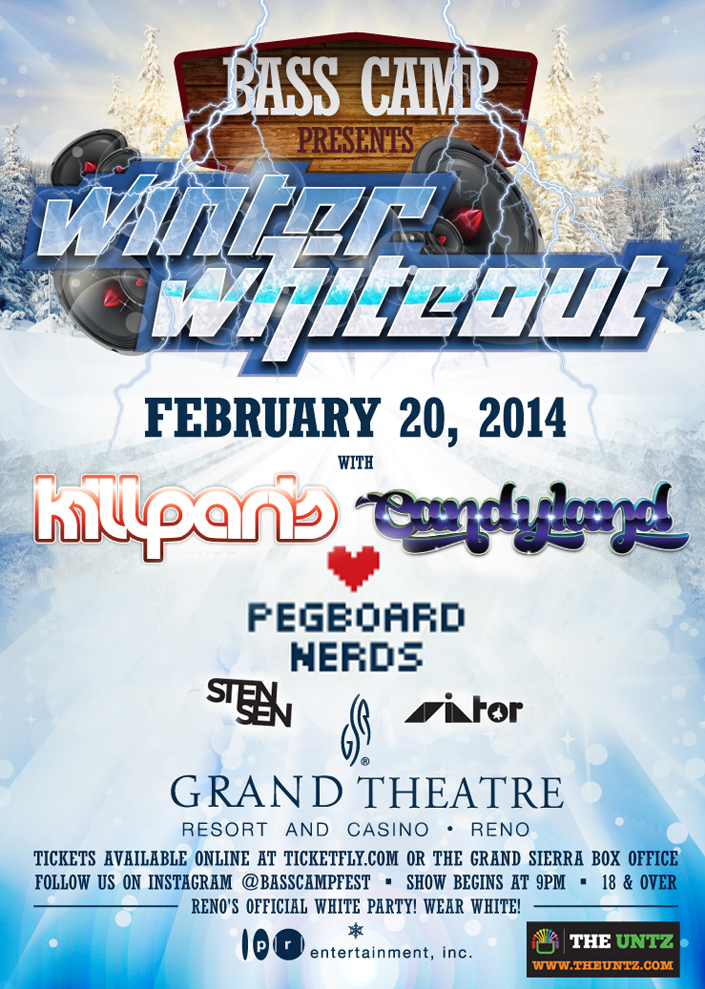 Kill Paris and Candyland, will co-headline Winter Whiteout EDM event at Reno, Nevada’s Grand Theatre, at the Grand Sierra Resort, Thursday, February 20, 2014, along with special guests, Pegboard Nerds from Europe, and local support from DJ Duo, Stensen, and Aviator. Tickets are on-sale now for $20 in advance, $25 day of and available online at www.TicketFly.com, by visiting the Grand Sierra Box Office, or www.grandsierraresort.com. It’s a White Party; wear white.

Kill Paris began his journey into music composition at age 16 learning how to play the guitar, which soulfully reflects in his Future Funk style and bass guitar riffs in his music today.  After receiving his recording arts degree in Florida, he moved to Nashville, TN, the heart of Rock/Country in the U.S. and produced for and performed with several Country music bands/singers. But it was his attraction to electronic music composition that led him into the heart of Los Angeles, California where he currently resides today. In the summer of 2012 he began to receive attention from some well-known EDM blog sites, testifying his undying love to Lana Del Ray, and earning some highly sot after Features from Dubstep.net, and ThisSongIsSick.com, which helped propel his music into the ears of larger masses. His success in the EDM blog-sphere online helped launch his touring carrier in late 2012 and early 2013, where he’s spent the majority of his time traveling and performing for venues and festivals in cities all across the country, including Ultra Music Festival Miami.  While juggling his touring career, Kill Paris has managed to release a 9 track EP on Skrillex’s record label, Owsla, and individually release several other official remixes for artists such as Nelly Furtado, and No Doubt. His most recent release, a remix of Rudimental’s “Feel the Love”, charted #1 on Beatport’s Top100 GlitchHop tracks, and also charted on the overall Top100 tracks for all genres.

Candyland is a DJ and producer duo that was born and raised right here in the United States. Their main weapons of assault are dubstep and electro house, and their tracks, “Piano Sure Is Neat” and “Hate On This”, popped on to the Beatport top 100 chart in a matter of days after being released. To see Candyland live is a truly incredible experience. Above their amazing bass lines and catchy back beats, their energy together on stage itself is so addicting and inebriating that to watch them is a show in itself.  After becoming the first act to win back-to-back Beatport remix contests (Skrillex "Make it Bun Dem" & Bingo Players "Rattle") and racking up over 5 MILLION Soundcloud plays, they released their debut album "Bring the Rain" on SPINNIN RECORDS (Jan 21st 2013) which charted: #3 on the Beatport Overall Releases Top 100, #1 on Dubstep Top 100, #1 on Electro House Top 100, #1 Drum N Bass Top 100, and #1 Glitch Hop Top 100.   Candyland continues to pave their own lane bridging the gap between Trap, Dubstep, and House music with every original and remix they release.

On trajectory from Denmark and Norway, the Pegboard Nerds have crash landed on the global electronic music landscape with meteoric force. The impact of their genre-bending music has been felt by peers and industry mainstays alike. With a string of hit singles on independent Canadian label “Monstercat” gaining millions of plays and the attention of fans over the world, it’s no coincidence that the hottest names in the game have begun to pay attention. From collaborating and remixing the likes of Krewella to Infected Mushroom, to being hand selected by Knife Party as show support, Pegboard Nerds’ ticket to international acclaim has been stamped.