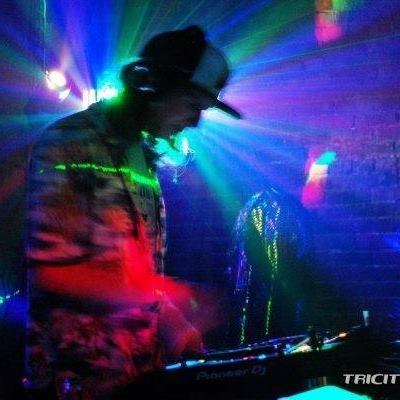 While Bryce Herlong is a newcomer to our feed, he comes highly recommended by the top brass at ThazDope Records. After the roll they've been on, we're likely to take them at their word when it comes to new talent. Today, ThazDope releases Vibe Emissions' Ridin' Music, which is four tracks of crunked out space bass ready to ride or die with you wherever you're going: be it carrying weight, robbing a liquor store, or picking up your dry cleaning.

“After Hours” is a spaced out tune with reverberating pads that set a mournful, almost eerie tone before giving way to a trap beat that sounds resonant and acoustic, as though coming off a live drum kit. Faint vocal grunts echo the listener’s response, as the vibes are real but the tune is gentle on the ear. The track works well as a lengthy intro to the whole EP, as Herlong’s style finds comfort between the heavy bass of trap beats and an ethereal, almost ambient set of influences that glide over the top of his tracks.

“My Flow” is also noticeably heavy in the bass while leaving tons of room in the top-end for experimental chimes and synths to lazily weave their way between the beats. The sound design on this track is among the more interesting on the EP, and Vibe Emissions’ attention to detail in the mixing comes through well, though the track remains quite simple in its construction.

“Like a Pimp (Vibe Emissions Bootleg)” is a throwback track with vocals deeply familiar to any rap fan, but with a completely reworked sampled production for the beat. This is the sort of track that gets attention, as other DJs will surely want to include this in their sets for a deep wobbly update to a classic track. The David Banner x Lil Flip original is a classic, and this edit turns it on its head and updates it for 2017. The vocal samples are pitched and affected to match the modern style of the beat, and the whole effect is a great recipe of old and new. Except to hear this track very soon in a haze-filled basement near you.

“Finders Keepers” is a low-end trap track with a heavy digital feeling. The production is minimal but feels complete, and elements overlap one another with plenty of breathing room for air while never dropping completely to silence. The track is short and is more of a straight-forward beat than a full dance track. I would love to hear Mr. Herlong link up with some rappers at some point while he continues to find his voice in his original, composed, listening music. I had heard his name bouncing around, but this EP is my first time paying attention to him, and I hope to hear more from him soon.