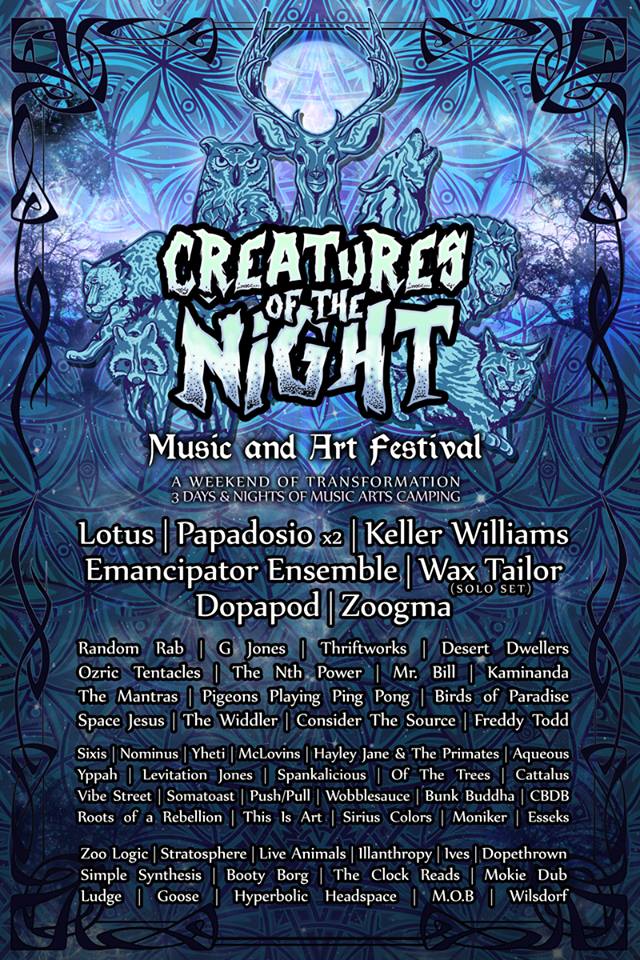 When we saw the final lineup for Creatures of the Night Festival, enjoying its inaugural event October 9-11 at Red River Valley Campgrounds in Adams, TN our jaws hit the ground. From top to bottom the lineup is absolutely airtight. It is stacked with incredible livetronica, instrumental downtempo hip-hop, psychedelic bass, electro-soul, straight up jam, and so much more.

For a festival less than an hour away from Music City, USA, it would be difficult for the organizers of this event to slack on the bill, but they have surpassed any of our expectations for a first-year festival. The great thing is, we've seen the level of events the brains behind Creatures have thrown, and we know that not only are these artists in good hands, but the fans are, as well.

With less than a month to go until the first fan breaks through that gate (not break in the sense of doesn't pay and runs in--we truly hope that's not the case, we're speaking metaphorically here, people), it is our duty to let you know who the acts are that you just cannot miss.

Make sure to venture on over to creaturesofthenightfestival.com to snag your passes, and to get all the info you could ever need.

The comparisons to Tipper aren't coming from the lazy, they're coming from the converted. Ben Wyss has impressed so many fans at festival after festival with his twisted bass lines, and now he's heading to Tennessee to make his mark.
9. McLovins
While this lineup is packed to the gills with electronic talent, sometimes we just want to rock out with our you-know-whats out. It's not often we're as impressed with the musicianship and raw songwriting talent of a band, but McLovins are an exception. (Psssst, don't tell anyone--UNTZ UNTZ UNTZ until we die, etc.).
8. Levitation Jones
Brian Gardner is the biggest thing to come out of Rhode Island since Peter Griffin. With bass, trap, and grime that's just as nasty, you'll be thrilled to see just how sinister those beats can get with LJ.
Additional Pages: