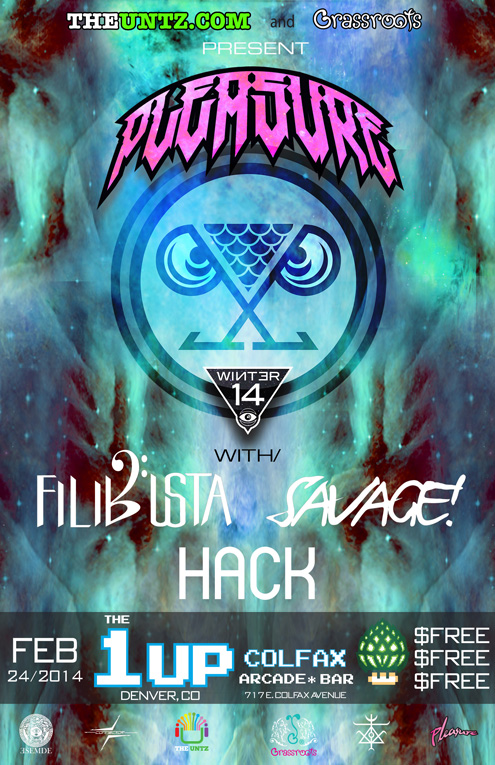 What's better than pleasure? Free pleasure. That's right. TheUntz.com is thrilled to be bringing Pleasure to 1UP in Denver, CO this Monday (February 24) in conjunction with our buds at Grassroots California for an absolutely free--that means zero dollars--showcase with some of his best pals.

We couldn't be happier bringing Massimilliano Pleasariano statesisde. He insisted on taking a steamer from his home in Positano, Itlay, so we've been waiting a couple of months for his arrival. Spinning soulful beats dripping with sex, Pleasure took some time off apprenticing for Daniel Day Lewis as a cobbler to hit some cities in the US on a cross-country tour.

Part of the Connector Presents roster, Pleasure has been jumping on bills with Random Rab, Andreilien, and many more bills, but this free show in Denver will be a special one. Untz-fave Filibusta is gracing us with his presence. Troy Probst has been a big contender in The Untz Challenge in the past, and has thrilled glitch-hop fans with his studio work, including the masterful Honeycomb Eyes, which dropped last year. Savage! and our good buddy Fucking Hack will be rounding out the bill.

1UP on Colfax is Denver's newest hotspot, busting down the walls of 2UP and moving into a brand new concert space. Weeklies with Sub.mission and EC Presents are putting 1UP in the runnning as the perfect after-party spot, as it's mere steps from The Fillmore, and just down the street from the Ogden Theatre and Biuebird Theatre.

This is going to be a big one--get your tickets at... NO TICKETS. It's a FREE event. Just come on down to 1UP on Monday night for some pleasurable beats.