The Big Up Festival 2013 came back with a bang. Whatever the reason was for taking a year off in 2012, this year really made up for it. The Upstronauts landed on Hemlock Hollow Farm in Claverack, NY to get their fix of space tunes. The main venue area consisted of the Heineken Big Up Stage and the Spaceball City Tent that alternated performances. The two stages were so close that all you needed to do was skip right over and continue getting down. The Schwartz Woods Stage , on the other hand, was decked out with mirrors and geometric designs—a real sight to behold.

Thursday, August 8th, started off sunny with Lespecial and an island funky beat with guests from Technicolor Lenses. Their set closed with a rough and ready ride that set us off for the rest of the night with help from Rob Compa from Dopapod. Compa came out again but this time with the rest of Dopapod to lead us into the midnight moon. Dan Africano and Scott Flynn from Elephant Wrecking Ball joined in on the fun and contributed to the good vibes.

Thursday or I should say Friday (all depends on your perception of time) included rain in the early morning, which continued for the rest of the day. All was quiet on Hemlock Hollow Farm as the Upstronauts were huddled and tucked away in makeshift tents or cars to stay safe from the rain that was knocked loose by Gigamesh, HiGHER ORGANiX, and Party Supplies.

As the rain subsided there was plenty of entertainment to enjoy. Here are some of the few performances you could have seen by simply people watching; employees rippin’ golf carts through the mud, employee’s golf carts getting stuck in the mud, Upstronauts’ space boots or bare feet being sucked into the mud, and plenty of mushy falls. After all of the mud and hay lain excitement was over, Escort perpetuated the entertainment. The whole performance is a must-see from their awesome drumbeats to the beautiful belting vocals of Adeline Michle. We were graced to be the first to hear their new single live, “Cabaret.” Holy Fuck was the last to rock the Big Up Stage that night. The hit, “Red” was ripped throughout the festival grounds that generated an unholy way of dancing. Gaudi did not hold back in the tent. His set included a remix of “Build a Fire” by Lamb and Bob Marley’s “Jammin’.” Brothers Past greeted the rising sun with “Leave the Light On” in the Spaceball Tent.

Saturday was an absolutely gorgeous day to end the festival. The golf carts and continuous foot traffic flattened out the mud and hay so there were far fewer wipeouts than Friday. As more Upstronauts landed for the Saturday pass, Consider The Source performed a Radiohead cover in their all white attire. HiGHER ORGANiX vibrations rippled through the festival and lured in the crowd.

Kung Fu played again but this time it was a Prince tribute with vocals by Jans from The Motet. This tribute was rockin’ and varied in style just like Prince. They obliged with classics “Purple Rain,” “Kiss,” “Musicology,” and “Raspberry Beret.” Normal Instruments is the remarkable combination of Mike Carter from Indobox, Matt Beckett from Cosmic Dust Bunnies, Jules Jenssen from HiGER ORGANiX, and Jeff Bujak. They absolutely killed the Spaceball City Tent and sent us all Upstronauts into intricate grid visual projections.

Beats Antique! Wow, what an absolutely unbelievable performance to finish off the main stage on Saturday night. Of course I expected to be entertained but this was on another level. They came out rockin’ hard, too hard because by the third song Zoe Jakes snapped one of her drums sticks in half. Careful not to poke anyone’s eye out, she threw half into the front row. The show must go on and it did! They performed Daft Punk’s “Get Lucky” on the banjo. They remixed “Satisfy My Soul” by Bob Marley and came back out to a shouting crowd for an encore that included a remixed “Voodoo” by Bassnectar. This was a jam packed performance and most definitely the brightest highlight of The Big Up.

Eskmo did not fail in carrying on the intense energy. Brendan Angelides has an extremely unique way of creating sounds for some of the best electronic music I have ever heard. From recording himself saying “big up” to opening a can and blending those sounds into the rest of the song is so interesting to witness and hear. AN-TEN-NAE kept the party going in the tent, not one person was left standing still. Orchard Lounge ended The Big Up with their house and techno and a ton of unreleased tracks.

The rain did not hinder anyone’s fun. As far as small festivals go, The Big Up is one of the best. If you have friends there you will dance into them many times and if you do not have any friends, there will be no trouble in making some. All us Upstronauts look eagerly forward to landing at The Big Up next year. 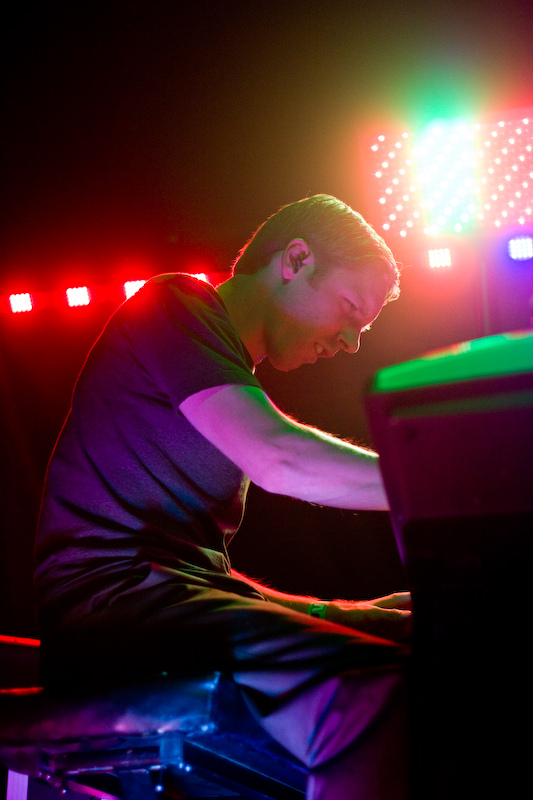