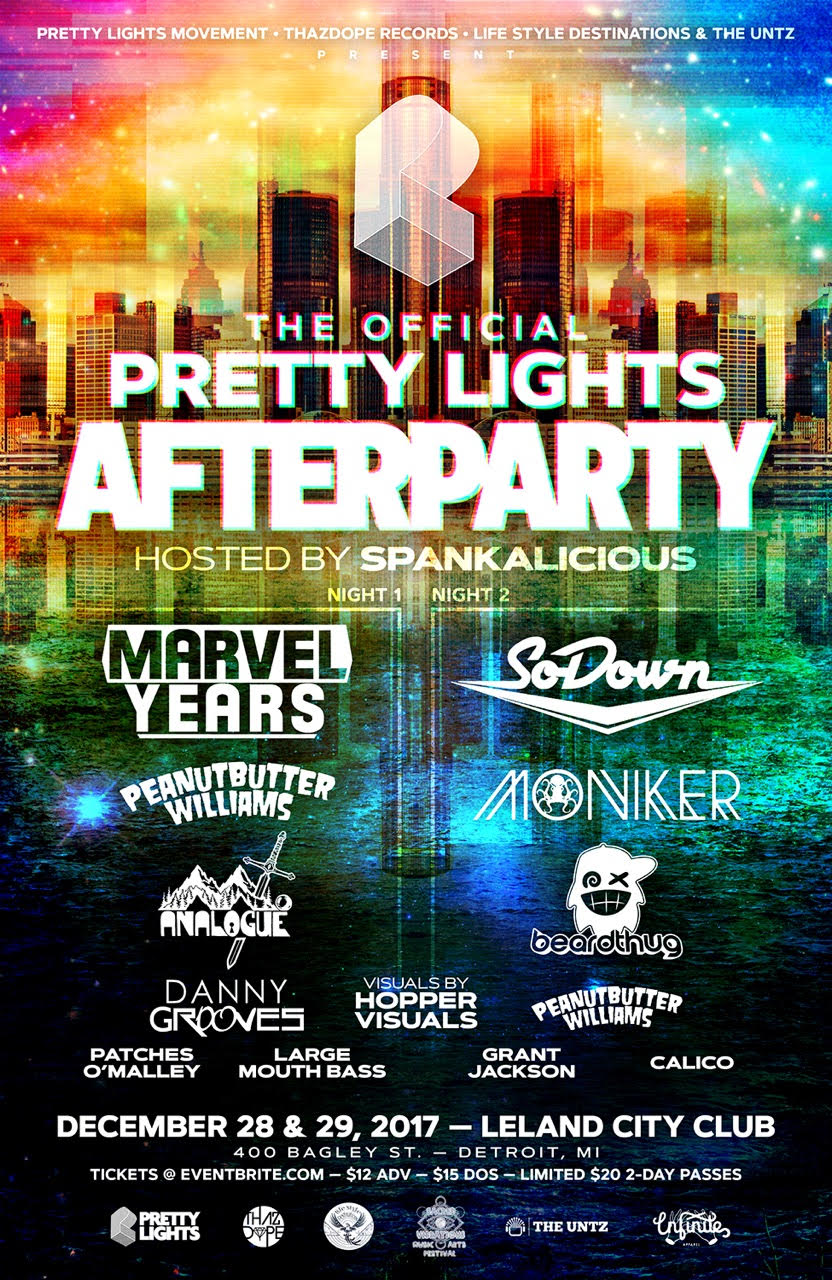 As anticipation grows for the Pretty Lights Live takeover of The Fillmore in Detroit, Michigan at the end of this month, we're throwing our hat in the ring with ThazDope Records, Life Style Destinations, and of course, the entire Pretty Lights Movement to bring midwest fans two nights of post-PL activity.

Less than half a mile from the Fillmore, Leland City Club will be hosting two stacked lineups on December 28th and 29th following Derek Vincent Smith's live instrumental annihilation of the Motor City.

Night 2 will feature SoDown, Moniker, beardthug, and a second Peanutbutter Williams set, as well as Grant Jackson and Calico.

Both Marvel Years and SoDown have enjoyed some major Pretty Lights support sets over the years, and are beloved by the entire PLM family. Additionally, Marvel Years, Mt. Analogue, Moniker, and beardthug should be extremely familar to The Untz Festival faithful.

Today, Moniker drops its much-anticipated Rubicon EP on Sleeveless Records, and recently Danny Grooves dropped his heavenly halftime mix, Off The Burner, on us. ThazDope Records is dropping a barrel of underground bass on Motown, giving fans an excuse to go even deeper after two nights of musical exploration. Your host for these excursions into the underworld? So glad you asked. Spankalicious will be playing the part of tour guide at each late night. Call him Willy Wonky as he welcomes you to his twisted factory of sounds.

Tickets are available now for the low, low price of $12 in advance, which will shave some money off $15 day of show prices. If you want to secure your spot at both nights, a $20 ticket will get you in, but those are going to be going mighty fast.

Remember, following Detroit shenanigans, ThazDope and The Untz crews hightail it for Atlanta where another two night party awaits for Warped Horizon bookending the Bassnectar NYE show. It's the most wonderful time of the year.

RSVP to the ThazDope Records Official PL Detroit After Parties