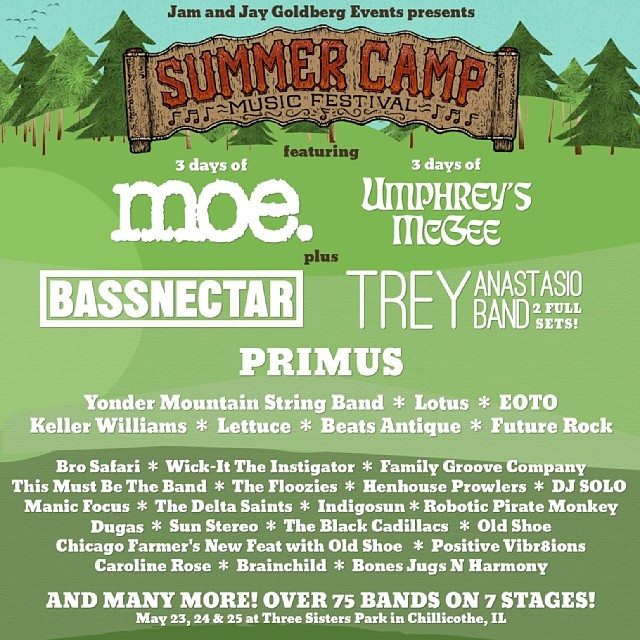 As winter settles in, festival activity is already heating up for 2014. One of the biggest annual midwest festivals is undoubtedly Summer Camp Music Festival, returning once again to Chillicothe, IL Memorial Day weekend, May 23-25, 2014. With Umphrey's McGee and moe. sitting astride the top of the lineup, as usual, the only question was which major acts will fill in the tiers below them.

The question has been answered with a resounding BASSNECTAR. A perennial favorite among the dance music fans of SCamp, Lorin Ashton returns to the festival after a couple year absence. Ashton's popularity at the festival has remained steady since 2010, and the big unveiling of his name at the top of the bill comes as no surprise to diehard bassheads.

Live electronic music has been well represented at Summer Camp since the genre's nascent years, favorites Lotus, EOTO, Beats Antique, and Future Rock are returning to the festival, along with newcomers The Floozies, who follow up their breakout festival debut last year. Manic Focus, another fast-rising act, makes his return to the bill, as well.

The talk of last year was of course the heavy rain and flooding Chillicothe experienced last year. Few will soon forget the epic lightning storms that set the backdrop for a thunderous Trey band set. But that's weather in the midwest! Don't like it? Stick around for 10 minutes... One thing is for certain, hardy Scampers will be coming out in droves once again this year. It's been a decade-long tradition, and shows no signs of letting up.