Calling all Tribers! STS9 is preparing for an epic five-night run at one of their favorite venues - The Tabernacle in their hometown of Atlanta, GA. Their New Years runs are highly regarded and allow the group to fully explore their sound across multiple evenings, all finally crescendoing on the 31st, launching you into 2014 in style.

Teaming up with big names for openers and after parties, the five days are packed with talent and we want you to be a part of it! The ultimate “Tribe Vacation,” the boys have it all setup. The band is already on top of their game from an epic summer on the STUMP tour with Umphrey's McGee, and this run marks the band’s 30th performance at the Tabernacle, a home court advantage if you will, so expect stellar production, sound, and vibes.


In the giving spirit? Conscious Alliance will be there all five nights accepting food and monetary donations and have beautiful slithering serpent event prints for each evening.

Openers
Canadian producer Lunice on the 27th, mind-melting soundscape creator Eskmo on the 28th, groovy composer and trumpet virtuoso Russ Liquid (an STS9 fave) on the 29th, electro-pop princes Cherub on the 30th, and soulful glitch-hop producer and fellow 1320 Records artist Project Aspect on the 31st.

After Parties
Holy moley they’re bringing in the big guns for when your Tribe coma commences after their sets to keep you dancing into the wee hours. All taking place at Terminal West, 2.5 miles down Marietta St. from the Tabby, all shows will begin at midnight. There will be no (official) after party on the 31st, as the band will be doing an extended show. 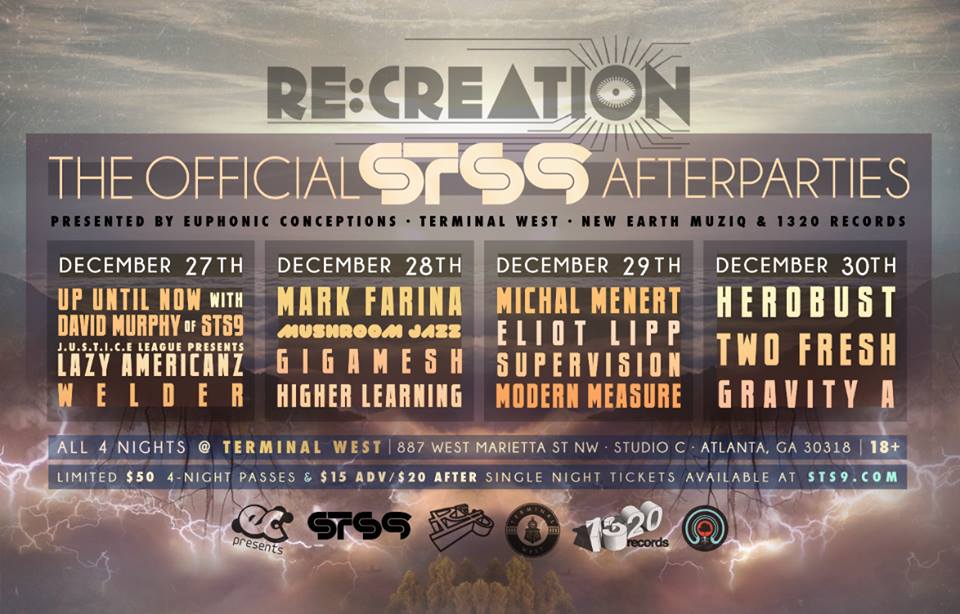 December 27th through 31st. The Tabby. Hotlanta. Be there or be square.