It's become a pasttime of mine to watch various SONIC BLOOM organizers scamper from stage to stage during the festival, greeting old friends and grinning like madmen and madwomen who have just stumbled upon the answer to unending happiness. While most festival organizers are pulling out their hair and screaming at underlings to put out this fire or that fire by day three, the upper management calmly moves between art installations and vendors, basking in the glow of their well-oiled machine.

That's not to say it's been an easy road for SONIC BLOOM. Completing its 11th year this past month, June 16-19 at the festival's official home of Hummingbird Ranch in Spanish Peaks County, Colorado, the trials and tribulations of the past decade have taught the crew what works and what certainly doesn't work. As the boutique electronic music festival has grown and moved from venue to venue over the years, the landscape has shifted dramatically in the mountain state.

What was once a gathering for ZILLA fans at the Mishiwaka Amphitheatre in Bellvue, CO has blossomed into a mid-sized festival with three stages and many more art, yoga, and workshop outposts. Many of the artists who graced those early lineups have blown up into megastars (e.g. Pretty Lights, Bassnectar, STS9), as electronic music has gone from niche interest to billion dollar industry at the forefront of the scene in the state. This year, the festival had to compete with two monster Red Rocks shows, hitting Morrison just two hours to the north, by Gramatik and Odesza. But competition is good for business. And Bloom knows what it's doing.

Targeting its fans with the artists they love, SONIC BLOOM played into hearts of its fans by ordering up not one but two sets from the godfather of glitch-hop, Dave Tipper, staying house-y and hip with Bonobo, and recruiting home state hero Michal Menert along with his Pretty Fantastics to retain the festival's family vibe. A bold gambit was to put one of the biggest acts on the bill, The Opiuo Band, on Thursday night, but it paid off in a packed main stage on the festival's opening day, with thousands of fans reveling in the Aussie outfit's thunderous sound and the gorgeous main stage production featuring a massive flower in bloom.

Mere days before the festival, Ott announced he would be unable to attend the festival due to a family emergency. Kalya Scintilla & Eve Olution stepped into the vacancy left by Ott & the All Seeing I, and fans were quick to forgive the absence as the giant hole was filled with exuberant tribal trance, storytelling, and a special guest appearance by Deya Dova. 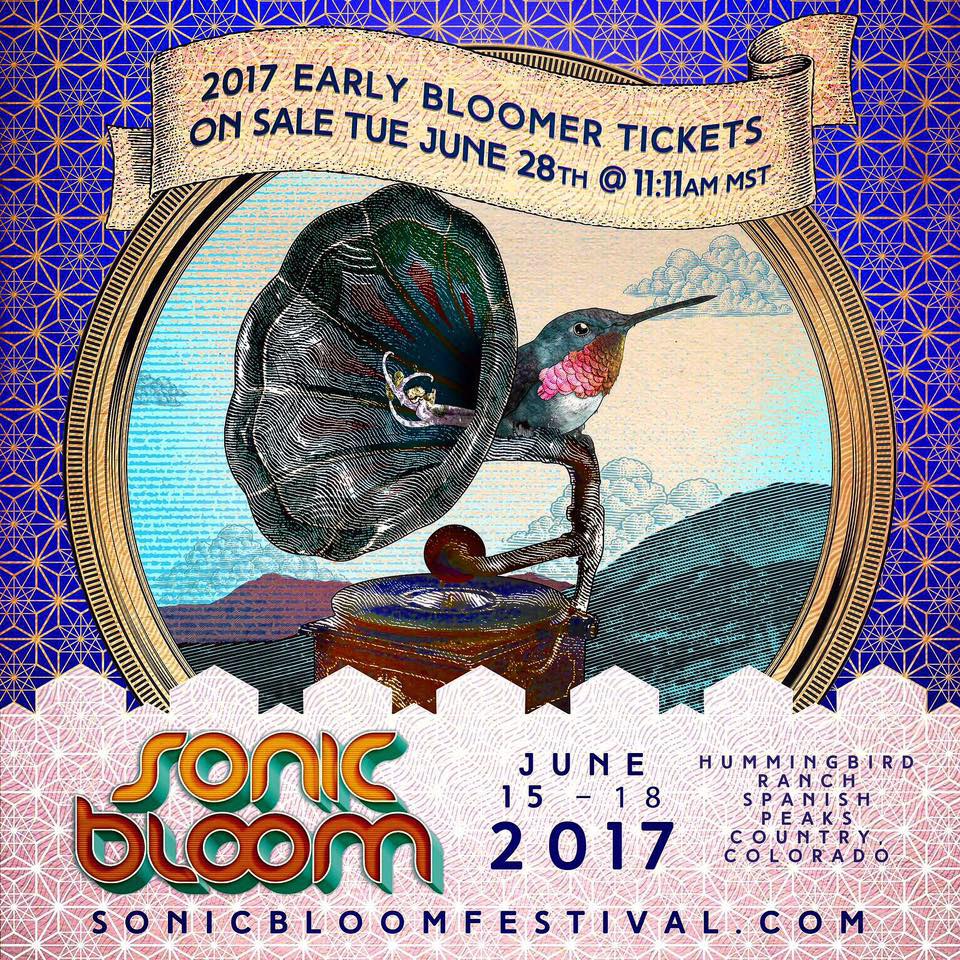 The Hummingbird Stage, which recalibrated its orientation 180° to nestle further into a tree-filled grove hosted rising stars in the underground bass world. Among them, Space Jesus, CloZee, and Living Light had standout sets, while original ZILLA member Aaron Holstein, a.k.a. VibeSquaD, played his last Bloom set on The Other Stage before retiring the moniker this year.

With a focus on up-and-comers and left-field acts, Bloom has developed a brand that few can challenge. While there are the requisite stars adorning the top rows of lineup, fans know that the hundreds of artists who fill out the rest of the bill are bringing something new to the table, and there's a gem waiting to be discovered hidden on all stages at all times. That focus has allowed Bloom to blossom unfettered over the years, because while the superstars play Red Rocks, the new ones are being born on the SONIC BLOOM stages.

But there's no rest for the wickedly excited. Festival organizers have already set their sights on 2017. With dates running June 15-18 for next year, Early Bloomers can already snag their deeply discounted tickets at sonicbloomfestival.com. The fun never stops.