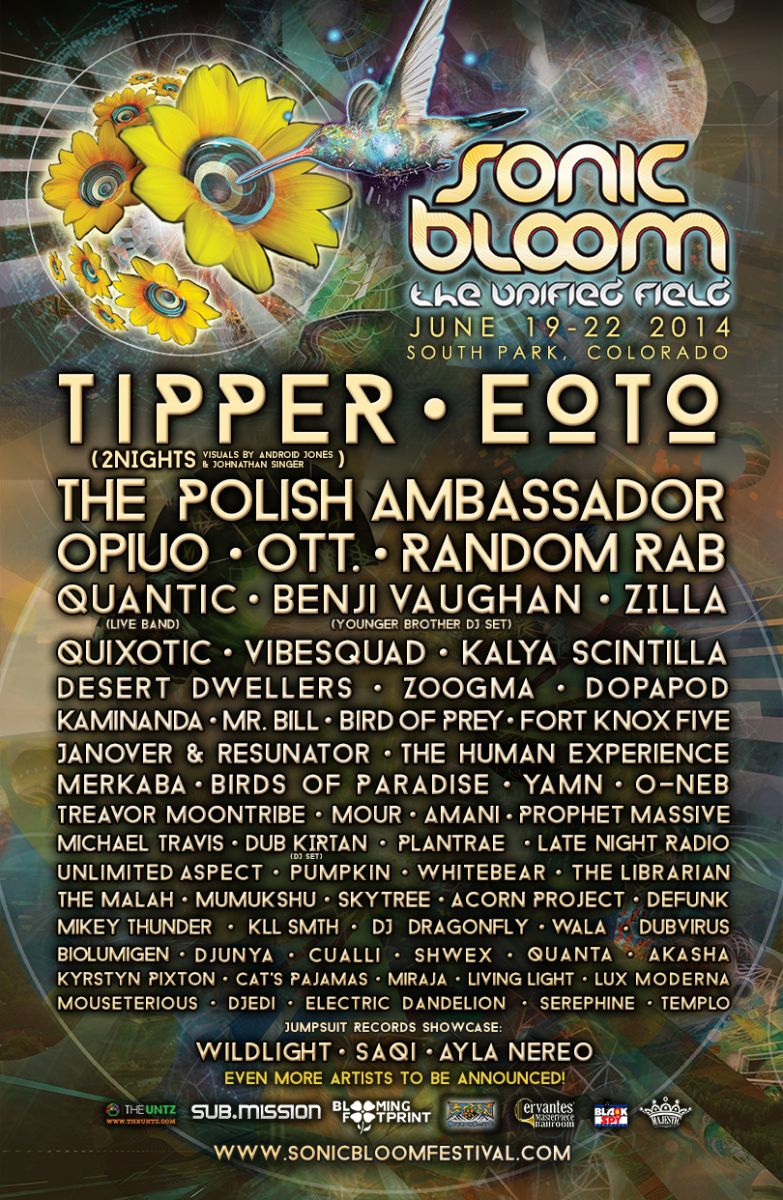 SONIC BLOOM,the nation’s premier boutique electronic music festival, is pleased to announce OPIUO, ZOOGMA, Mr. Bill, Fort Knox Five, The Human Experience, The Malah, Living Light, and more will be joining its initial lineup including Tipper, EOTO, The Polish Ambassador, Ott, Random Rab, Desert Dwellers and more. The festival will once again be held during the Summer Solstice on June 19-22, 2014, at a gorgeous new site location, The American Safari Ranch in South Park, Colorado http://www.americansafariranch.com/.
Featuring a breathtaking 360 degree mountain panorama and views of the continental divide, this new site in South Park is purely Colorado. The size of the site will allow for a car camping option, meaning no more shuttles, just a short walk from the stage to cars and campsites. There will be an indoor saloon with late-night music and VIP packages will include optional on-site lodging packages.
In his only appearance in Colorado in 2014, Tipper will be performing two sets at SONIC BLOOM with accompaniment from legendary visual artists Android Jones & Johnathan Singer. Tipper is known for his mastery of electronic music ranging from mid-tempo glitch hop to downtempo melodic composition.

Once again, The Untz Challenge will grant TWO winners spots at SONIC BLOOM. Amateur producers have until 11:59pm PST on March 28th to submit tracks for consideration, after which the top submissions will be open for voting to determine which breakout artist will make its way to the Bloom, as well as a number of major festivals taking place around the country this summer.
Unifying a cast of some of the world’s most electrifying musicians, performers, visionaries and artist, SONIC BLOOM, is an inspiring showcase of the best Colorado’s vibrant EDM scene and is at the forefront of the transformative festival movement. SONIC BLOOM has been credited for helping to break the careers of Bassnectar, The Glitch Mob, Beats Antique and Pretty Lights as it is known for discovering and hosting the most progressive electronic innovators and live electronic acts with styles that span the electronic music spectrum: from the highly celebrated to completely unknown.
In that spirit, this marks the first year of The Road to SONIC BLOOM Tour, which has sent a roving lineup of present, past and future SONIC BLOOM, Sonic Blossom and The Unified Field performers across the country to spread the BLOOM vibe. A combination of wildly varied lineup of DJs, producers, live electronic acts, with painters, dancers and performance artists will criss-cross the country this spring as we approach the summer festival. Mini-Blooms have taken hold in Seattle, Portland, New York City, and more, and the tour continues See a full list of dates and cities below.
Road to SONIC BLOOM Tour Dates:
Apr. 04 - 1904 Music Hall - Jacksonville, FL
Apr. 05 - The Nest - Miami, FL
Apr. 10 - The Parish - Austin, TX
Apr. 11 - Easter Island Festival - Keetonville, OK
Apr. 12 - Sons of Hermann Hall - Dallas, TX
Apr. 25 - Abbot Sports Complex - Omaha, NE
May. 2-3 - Cervantes - Denver, CO

MORE DATES WILL BE ADDED SOON!

The annual Unified Field celebration, May 2-3 in Denver, has a star-studded cast, once again, this year! OPIUO, Random Rab, Zoogma, ill-esha, Janover & reSunator, and more head up this year's official pre-party at Cervantes' Masterpiece Ballroom, and The Other Side next door, as a rambunctious dual-venue event.

Tickets and more information available at the official website: www.sonicbloomfestival.com.