Before venturing to the frosty north to catch the dark demon of dubstep, himself—Mr. NiT GriT, a stop into Lafayette, Indiana’s oldest bar, the Knickerbocker Saloon, to catch two of the Midwest’s premier live electronic acts was in order.  Skeetones out of dropped in on the boys of L-town, sixdollarsuit, who were matched in between sets with a little d&b DJ’ing.  The oldest spot in Indiana to catch a drink and some tunes, a place known for jazz, and especially for blues, was about to get flipped on its ear.

It bears mention that an old friend of mine has gracefully bowed his head and allowed the malicious, evil, and sinister world of dubstep into his sets.  Mr. K, also known as Kyle Miller, has been spinning drum & bass and jungle for years.  Catching strains of Nero escaping from his turntables made me smile.  Oh, how the smug and snobby have stooped.  It’s OK, ol’ buddy… the times, they are a-changin’.

Skeetones are on a mission to claim the . Spreading out from their fan base in the Cincinnatti/Covington region, the band has been spotted up in Columbus and Cleveland, as well as up and down and into .  Skeetones are fueled, not only by Cole Brokamp’s love of everything low and heavy, but by a wide range of electronic influences.  Nothing too dubby appeared for half their set, choosing instead of focus on technical jam runs in various livetronica arrangements.  Gritty and focused, the band travels well, with a confidence and gusto of a much more seasoned act.  Brokamp’s brother, Robby, mechanically chugs his way through tempo-timed tracks.  The three-headed keyboard and sampling force of guitarist Mike Lees, Tyler Magnarini, and David Sweitzer are proficient, if not polished, accomplishing polyrhythmic licks and maintaining the churning jazz undertones needed to guide such a big beat.  Having never seen Skeetones in action, it goes without saying their claim of southern is not without merit.

Sixdollarsuit is known to draw the crowd.  By the time Skeetones have wrapped up, the Knickerbocker stage-side is filling up, and the bar-side (AKA smoker’s paradise) is nuts to butts.  The band has been practicing hard, and is planning on busting out much new material for their home stand.  Effortlessly sliding into their first number, the audience is instantly rocking and swaying, whooping and hollering.  John Ross Kirby, with his wry smile and ice-cold demeanor sloughs off chord after chord, and run after run.  Ever the effervescent side show, bassist Nick Golder slyly moves from one end of the stage to another, each groove well-timed and well-executed.

Hometown shows beat all.  Knowing your sound system, hell, knowing your sound engineer and knowing they know you—safety and comfort is what it’s all about on stage.  Your buddy calls his buddy, who calls three of her friends from down the block.  Soon, everybody remembers you’re back in town and playing a show at the ol’ home place.  Your friends are yelling out the names of the songs they love—sure, that can be annoying.  But you’re home and you’re among friends. 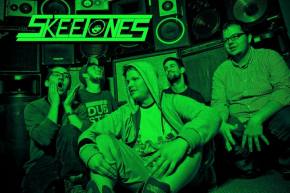