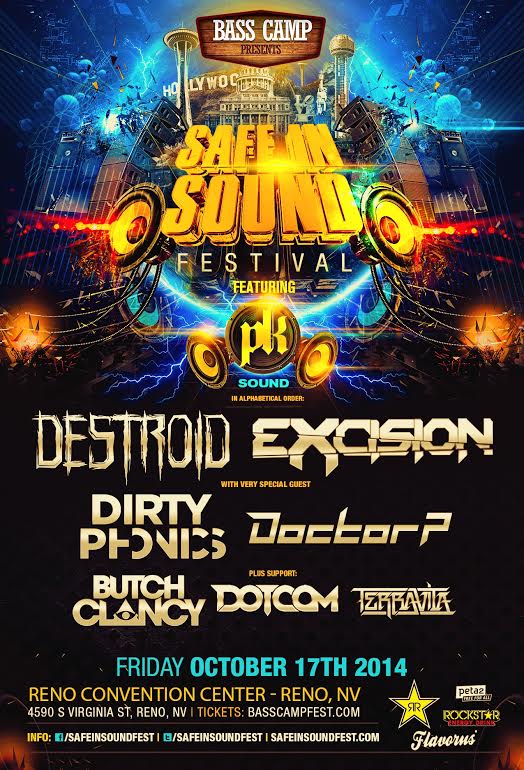 Our jaws dropped when we heard the news this morning. Not only is there a massive bass music tour hitting cities across North America in September and October, but the level and quality of sound coming along is unprecedented.

Adventure Club, Destroid, and Flux Pavilion will be headlining the SAFE IN SOUND festival, a roving, rotating lineup of the biggest acts in bass music. We're talking support from Excision, Doctor P, ZEDS DEAD, as well as ƱZ, Caked Up, Downlink, Terravita, and more.

Not only do you have the star power in the lineup, you've got mad firepower with the screaming 150,000 Watts of bass from the unparalleled PK Sound hitting the road.

Excision has been a huge fan of the company, and has used it with his Executioner setup. Fans are NOT going to be prepared for the subsonic onslaught that is the SAFE IN SOUND tour. LA, Detroit, Philadelphia, Phoenix, Las Vegas, Toronto, Milwaukee, Seattle, and more are on the hit list.

This tour will be hitting amphitheatres, arenas, and ballrooms across the continent, with huge shows slated at massive venues. Stay tuned for tickets and lineups, which will be revealed over the coming weeks. The organizers of the event have promised to keep prices low, and the bills stacked.

Visit safeinsoundfest.com to stay up-to-date on all the news. This is a tour of monster proportions.