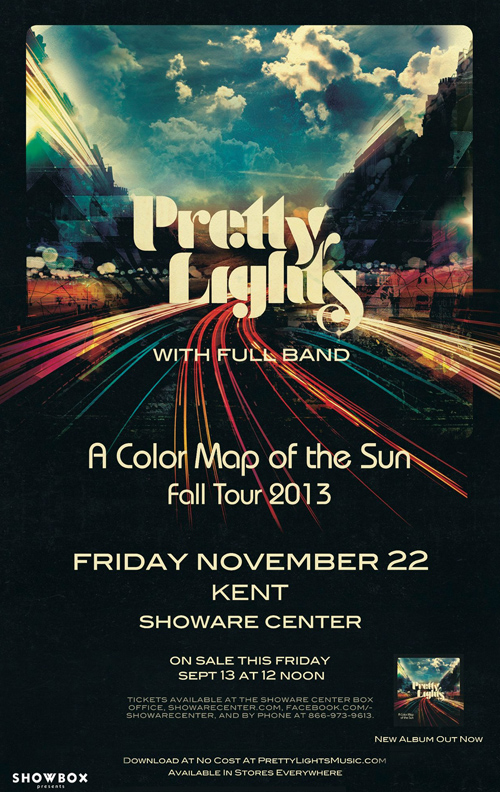 Music possesses a unique power to peel away the mundane and reveal something beautiful at the core of our existence. When you experience this revealing in a concert setting, the transformation becomes infinitely amplified.

The ability of musicians to improvise and play to the crowd is the essence of live music. Electronic music is more about a composer’s opportunity to showcase the masterpieces they’ve spent countless hours perfecting. The emergence of electronic music as a viable form of digital art initially resulted in a backlash from many traditional musicians. DJs and producers have had to work hard to gain credibility from mainstream instrumentalists.

These two sects have been on a collision course. And a man by the name of Derek Vincent Smith, otherwise known as Pretty Lights, has taken this collision and turned it into something spectacular: the Analog Future Tour.

Smith’s early albums revolutionized the electronic music industry. Not only has he changed the way music is distributed by giving away his albums for free, but he continues to cultivate a unique sound. His albums rely heavily on sampling from soul and hip-hop records while adding in additional instrumental flourishes.

In his latest album, A Color Map of the Sun, he decided to try a new approach to composing - and subsequently pioneered a whole new style of live music performance.

There is an amazing documentary on how Smith made the album that you should absolutely watch, but ill give you a quick summary in case you don’t (but you really should). Instead of digging through crates at record stores, he decided to create his own vinyl which he then sampled and ran through analog synthesizers. The result is what Smith calls “a modern production album created with gear and hardware that existed 40 years ago.”


Having previously seen Pretty Lights four times in concert, I can verify that his name accurately describes the experience. The shows are know for their mind-boggling visuals; gritty cityscapes light up like christmas trees and tidal waves of color splash across massive LED panels. But the previous times I’d seen him had all been DJ sets. Each performance improved upon the last, and yet the focus had always been on the immersive imagery backed by his signature blend of soul, hip-hop and electronica (hybridized popularly as electro-soul).

This time was different.

Smith decided that in order to really represent his new style of composition, he needed the addition of live instruments. Thus the Pretty Lights band was born.

Both halves of Break Science (drummer Adam Deitch and keyboardist Borahm Lee) join keyboardist Brian Coogan, Scott Flynn of John Brown’s Body on trombone and Eric Bloom of Lettuce on trumpet. In addition to controlling his smörgåsbord of laptops, APCs and mixers, Smith also jams out on the bass.

Pretty Lights rocked the ShoWare Center in Kent, WA (a town just outside of Seattle) on Nov. 22. After an uplifting, blissful opening set by local-boys-done-good Odesza, the band played almost every song off A Color Map of The Sun, Smith’s most recent release, with the highlights being “Let’s Get Busy,” “Color of My Soul” and “Done Wrong.” They even adapted a few classic Pretty Lights cuts such as “I Know The Truth” and “Sunday School” for the live setup. The result was an electrifying performance that lasted for almost three hours. This perfect marriage of modern and retro sounds hypnotized the crowd. We all stomped our feet and nodded out heads in a unified symphony of love.

The mark of an excellent concert is its ability to transport you to another dimension, to literally pull you out of your consciousness and bring you into a realm free of worry or concern. My favorite Pretty Lights song, “Hot Like Sauce,” contains a sample from Nina Simone’s “Tell It Like It Is” that goes, “life is too short to have sorrow / you may be here today and gone tomorrow.” I’d heard this line blast through various speakers a thousand times, but hearing it paired with brass, bass and pounding drums was a dream come true.

The Pretty Lights band just raised the bar for live electronic music. If these guys come to a town near you, go see them. Witness the future before it becomes the past.