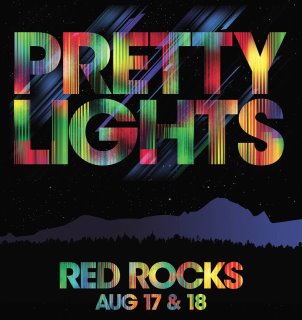 With extras hard to come by for under $100, there was no question that Red Rocks was the place to be on Saturday, August 18th.  Capping off a sold-out two-night run at the monumental venue, Derek Vincent Smith aka Pretty Lights treated his home state to one final party of beats and color.

The evening was a label showcase of sorts, with a slew of opening sets by Pretty Light Music (PLM) artists Michal Menert, Gramatik, Paul Basic, Break Science, and SuperVision. Menert’s sample-heavy, laid-back vibe set the tone for the night in a stellar but short-lived performance.  Gramatik, accompanied by a live guitarist, bombarded the crowd with funk-tinged bangers like “Talkbox Intended” off of his new, noticeably heavier EP Digital Freedom.

But it was the passion of Break Science that really stood out among the label. With complex bass production over the genius of Adam Deitch on drums (who played alongside Pretty Lights himself briefly in 2010), the duo seamlessly moved through electronic genres with professional precision and energy.

When Pretty Lights finally took the stage, only then did the crowd get to experience the massive LED lighting rig that sat ominously behind the openers.  Always trying to take his live experience to the next level, this year’s production was a spinoff of the LED towers Derek brought to Red Rocks last year with the addition of a colorful bridge and a sprawling high-res screen that swirled urban landscapes and spacey visualizations through the set.

Smith’s “pretty lights” complemented an extensive set of music that spoke well for the artist’s versatility.  He has made his name by massaging the piercing production techniques of the dubstep movement into a soulful, grooving alternative—Saturday’s set was just that.

Mellow, downtempo offerings like “Understand Me” and “Someday is Everyday” set the tone for disco jams like “Up & Down I Go” and new material that was noticeably more segmented and glitchy.  Longtime fans got to smile during his trademark remix of Pink Floyd’s “Time” and the catchy syncopated womps of “Out of Time” erupted the amphitheater into frenzy.

When Smith dropped a remix of his hit “Finally Moving,” few in attendance were not boldly singing along to the uplifting Etta James vocal sample of “Sometimes I Get a Good Feeling.” Saturday night on the rocks, the feeling was mutual.