The east wall of the Fillmore Auditorium in Denver, CO is a musical museum, of sorts. Hundreds of photos from years of unforgettable concerts ranging from Willie Nelson to the Beastie Boys to Deadmau5 overlook the former skating rink’s cavernous expanse. Three men just earned the right to join these legendary brethren: their names are Justin Boreta (Boreta), Edward Ma (edIT) and Joshua Mayer (Ooah), and together, they call themselves The Glitch Mob.

The LA-based trio (formerly a five-member group until the departure of founding members Kraddy and Kitty-D) is known for crafting complex tracks that are at once melodic, dark, uplifting, and totally bass heavy. Their tunes contain elements of breakbeat, metal, glitch-hop, dubstep and countless other genres. Incorporating this diverse assortment of sounds into their music has garnered the Mob a healthy following all over the world, and the several thousand souls packed into the Fillmore proved that Denver is no exception.

After kicking off their set with some older tracks such as “Drive It Like You Stole It,” the single from the group’s debut album entitled Drink The Sea, they then transitioned into a majority of material from their sophomore album, Love Death Immortality, which dropped in February.

Each of the trio's releases has its own unique feel but retains its inimitible signature style. During a Reddit AMA in December 2013, the Mob was asked what fans could expect from the then-unreleased Love Death Immortality. They responded, “bigger stories, bigger feelings… Emotion.”

It's a fair assessment. Compared to Drink The Sea, which has a slower, more orchestral pace fit for a sci-fi soundtrack, the new album exudes more energy and a tone of grandeur well-suited for subwoofer-laden dance floors. 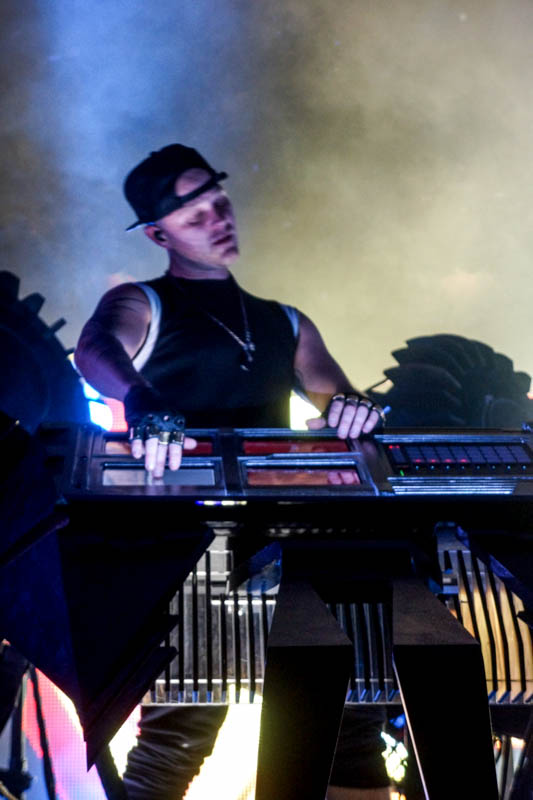 Electronic music has its fair share of DJs who stand on stage staring blankly at their laptops. Sometimes, you can’t tell if they're actually mixing tracks, or are just up there checking Facebook. This was not the case during The Glitch Mob’s set.

The elaborate structure of equipment, which they refer to as The Blade, contains three stations outfitted with MIDI controllers and four light-up touch panels. The boards were angled toward the audience so we could watch them work their magic. The whole stage looked like it was designed for one of Christopher Nolan’s Batman films. But this show wasn’t all digital — they each took turns hammering away at a line of drums wrapped in LEDs that sat behind their Transformers-meets-Mad Max machinery.

They finished with an encore that included “We Can Make The World Stop” and a rowdy rendition of “Skullclub,” one of the most upbeat tracks from the new album. Before the encore, Boreta asked the audience to do something that more musicians should do. He pleaded with us to put our phones away and simply be in the moment. A few rogue Snapchat and Instagram addicts ignored him, but overall the crowd seemed to appreciate this request.

When the lights came up and we began to funnel out into the pleasant spring evening, a sense of satisfaction fell across the attendees. The Glitch Mob delivered more than just nod-inducing beats and dazzling visuals. They gave us a complete performance. They gave us memories. They gave us more reasons to put them up on the Fillmore’s wall.