In its sophomore effort, the crew behind Bass Camp 2014 were committed to creating an even bigger and better experience on all levels. A change in venue to the picturesque North Tahoe Regional Park in Tahoe Vista, California, was the first step. Extending the hours of Bass Camp was next on the list. Then organizers added a second stage, brought in by everyone’s favorite mobile dance party, The Dancestronauts. Combine all of that with a killer production and some heavy ammunition in the form of Flinch, MartyParty, Kill Paris, Candyland, Infected Mushroom and Datsik and this camp had all the makings of an epic good time. On July 19th it all came together.

Though the gates wouldn’t open until 11am, campers were lined up hours early and were raving to go. You could feel the excitement of going off to summer camp in the air. Summer camps are usually packed full of activities and entertainment for the campers throughout the day. Bass Camp is no different, 12 hours packed full with a variety of electronic music and lots of dancing.

Though the forecast called for rainstorms and ominous clouds lurked all day, the sun shined bright and the heat factor was high. Anaheim’s Hit Mechaniks didn’t seem to mind the heat, as the southern California brothers played a high energy set augmented by an MC and some zealous hype men. The campers went crazy when the duo dropped a remix of Kiesza’s "Hideaway." HOT.

Meanwhile at the Dancestronauts' stage, 2014 insomniac Discovery Project winners Vice Versa had gathered quite a crowd. A set that consisted of a mixture of originals, remixes and their personal favorites finished strong with the month old Ilan Bluestone remix of Oceanlab’s "Satellite." BEAUTIFUL. 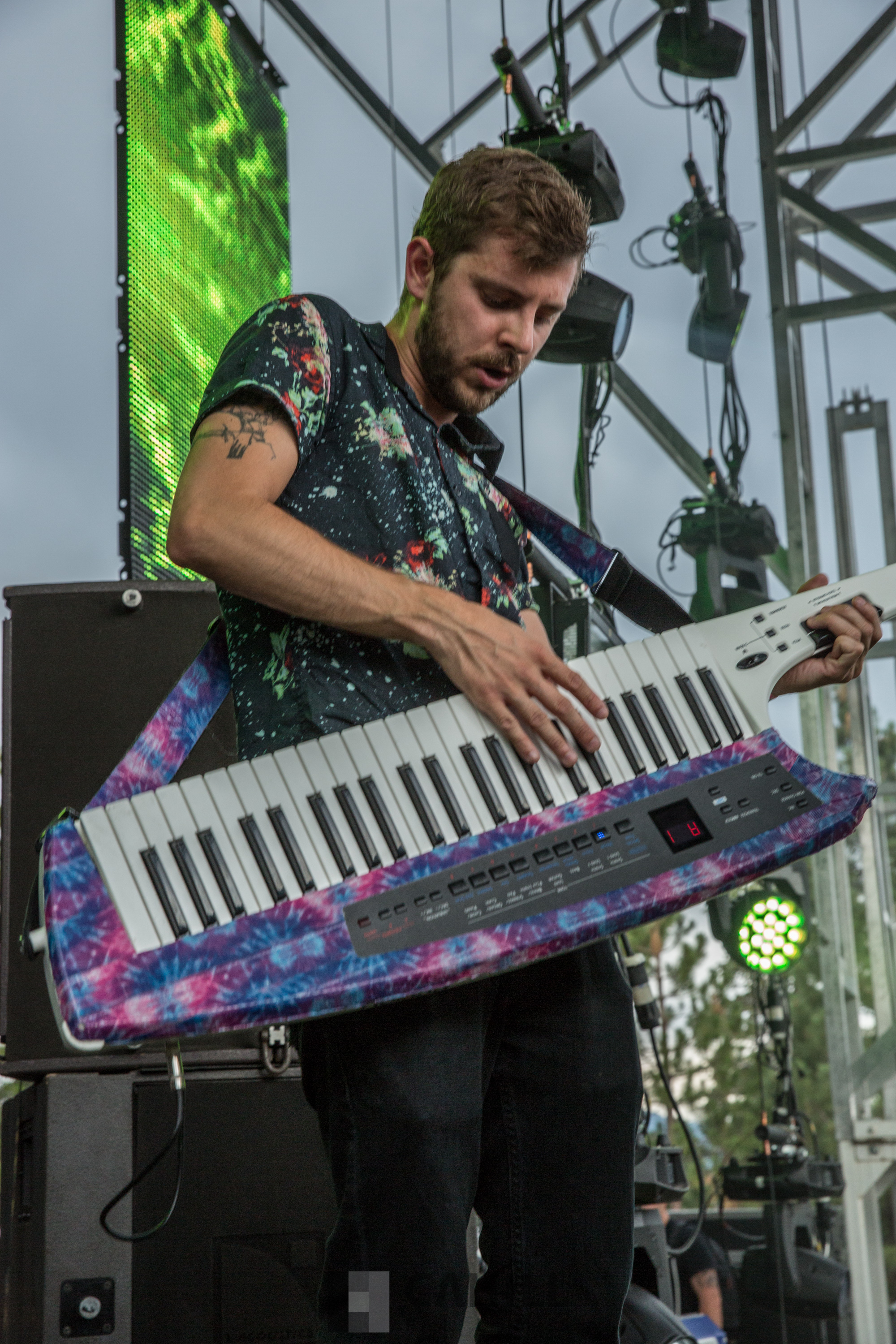 Kill Paris took the main stage by storm more than the weather did all day. This man and his keytar are definitely helping to keep funk alive in EDM. He reinforced any doubts of that with a little Parliament jam at one point. There is no doubt it was one of the freshest sets of the day. Fulfilling his duty as camp counselor, he also took some time to drop some knowledge in the form of a hyped up edit of the Bill Nye the Science Guy theme, which quickly prompted smiles and infected nostalgia throughout the camp. FUN-key.

There is one thing about a Candyland show you can always count on; the Santa Barbara duo’s unmatched liveliness and interaction with their fans. Whether it’s Ethan Davis’ champagne showers and trips to the dance floor via crowd surfing or Josie Martin’s spirited call and response sessions with the crowd, they are always fully invested in their performance. At Bass Camp they had something new in store for the campers: “The Wall of Death," as Martin referred to it. The co-counselors instructed the crowd to divide in half down the middle and wait for the drop, then to charge the campers opposite them, meeting in the middle for an EDM mosh pit. They cranked the track back up to its peak and as the bass dropped the crowd collided in a rarely seen EDM pit. SLAMMING.

A majestic sunset full of shades of pink and purple set the back drop as daylight made way for the night time portion of camp and with it, Infected Mushroom. The only live band at Bass Camp, the Israeli-bred psytrance pioneers owned the stage and the crowd. Amit Duvdevani’s energetic stage presence and signature vocals along with Tom Cunningham’s screaming guitar solos really made the music come to life with the feel of a rock concert. The incredible stage production consisting of LED panels, lasers and more didn’t hurt either. The band ran through a variety of tracks from the past, present and future. Running through psytrance classics "Becoming Insane," "Cities of the Future," and "IM the Supervisor"along with newer bass music tracks like 2012’s "U R So Fucked," "The Pretender"and "Nothing to Say," and 2014’s collaboration with Savant "Rise Up." Like any good rock-n-roll show, they even played a few cover song sing-alongs, Depeche Mode’s "Personal Jesus" and a rambunctious set closing version of the Beastie Boys "Sabotage." Whether it was the freshness of a live band, Infected Mushrooms intense energy or the eye-popping visuals against the night sky, Infected Mushroom’s set was a highlight for most campers, myself included. INFECTIOUS. 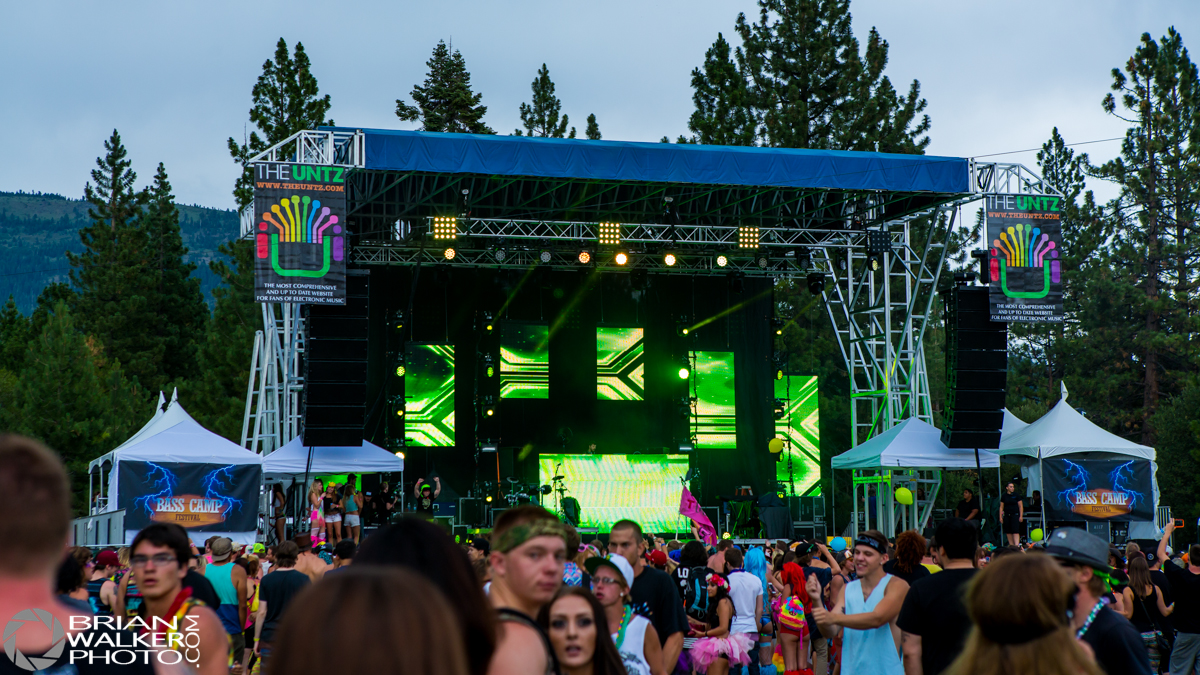 Fittingly, Datsik, one of the recent educators of all things bass, would close out Bass Camp. Taking the stage after Infected Mushroom and bringing the heat, the Firepower Records boss immediately took control of the crowd. Coming straight out of the gates with his most recognizable track, “Firepower” he immediately had the full attention of camp. He incited the campers to put their hands in the air via an unreleased Danny Avila track with a nasty drop. Datsik even paid respect to some current club hits, as he dropped his fellow Canadian Bryx’s remix of Lorde’s "Royals" and labelmate Bear Grillz dubstep infused bootleg of The Chainsmokers "#Selfie," amongst some throwback Dr. Dre tracks. The true throwback of the night came when Datsik decided to educate camp on his hip-hop roots and ended the night with his “favorite hip hop tune of all time” Notorious B.I.G.’s "Juicy." BANGING.

Just like the end of most summer camps, the campers weren’t ready to go home just yet. As Datsik’s final beats echoed through the park, the crowd chanted and demanded more, but every camp must come to a close at some point. At a minute past eleven, Bass Camp was over, the campers were thanked for coming and wished a safe trip home and return next year. With the preparation, dedication and work ethic of the PR Entertainment crew and everyone else involved in making Bass Camp 2014 a success, you can guarantee next summer’s installation will once again raise the bar and exceed expectations. Bass Camp 2015 can’t come soon enough.