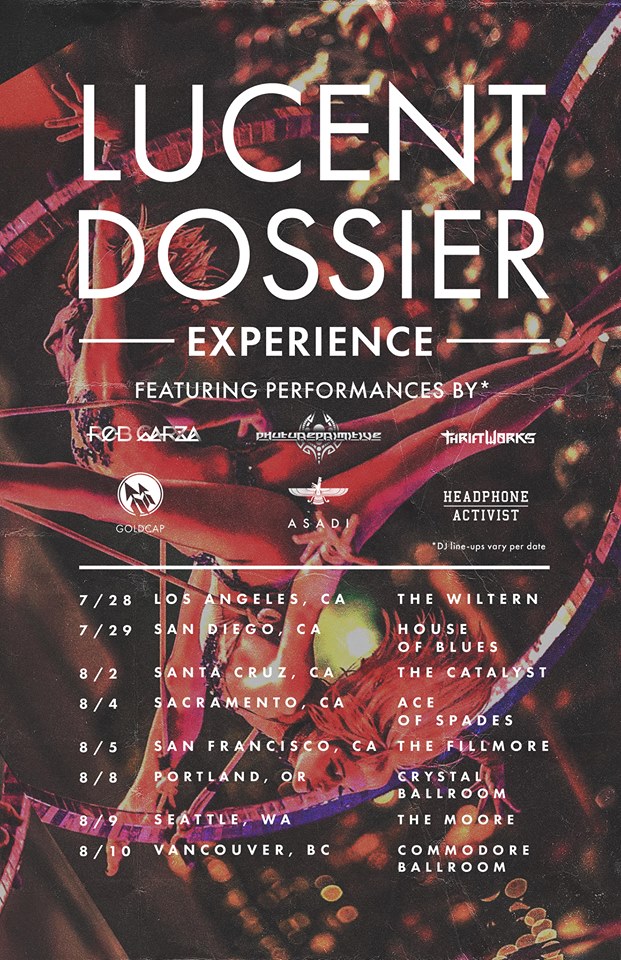 Timing is everything, especially in dance. Choreography requires incredible precision by performers, musicians, lighting directors, visuals, and even costumes.

Nobody knows timing better than the high-flying members of the Lucent Dossier Experience.

The long-running haute couture acrobatic and performance art troupe has been a staple of the west coast psychedelic underground circuit and mainstream pop-fashion-entertainment world for more than a decade. From Coachella to Christina Aguilera, this jaw-dropping living art show has dazzled audiences the world over in a variety of different arrangements, incarnations, and arenas.

Now the Experience is slated to embark on its raucous west coast tour starting July 28th in Los Angeles at the world-famous Wiltern, which seems as good a day to drop a new album as any. Produced by long-time favorite of The Untz, AHEE, a.k.a. Chris Adams, and Atla Gadret, the 5-track EP, Revival, covers a lot of ground, ranging from progressive house to hip-hop. There are a number of world music influences throughout the EP, especially evident in today's premiere, “Kali Ma,” which blends exotic far-flung flavors with hard-hitting trap beats.

From Los Angeles, the troupe dips down to San Diego, then continues northward through Santa Cruz, Sacramento, San Francisco, Portland, Seattle, Vancouver, and finally the tour culminates at the 20th anniversary of Shambhala Music Festival, which has long been a stronghold of cutting-edge art and performance. Along the way, the troupe will be joined by many UNTZ faves including Phutureprimitive, Thriftworks, Rob Garza (of Thievery Corporation), ASADI, Goldcap, and Headphone Activist. Tickets are available now, and special me +3