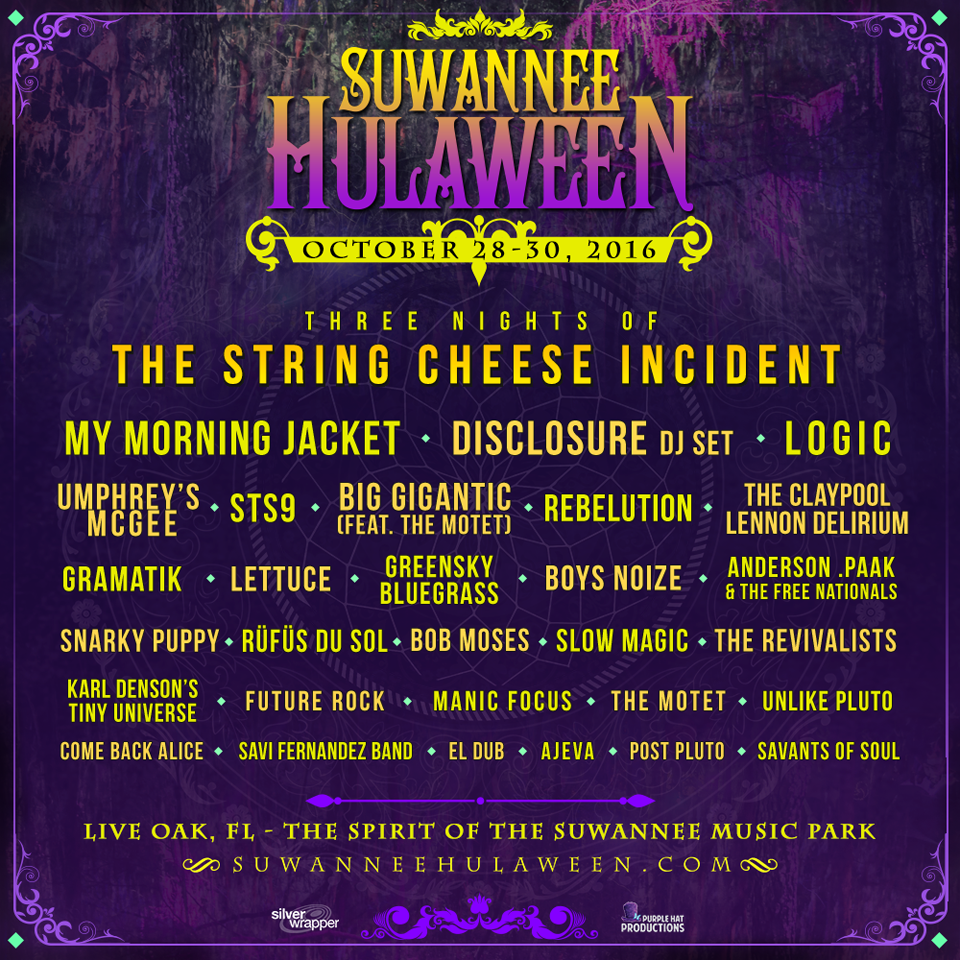 Ain't no party like a Suwannee party, 'cause a Suwannee party goes BIG. Mere days after a wildly successful Tipper & Friends full moon gathering that brought 7,000 weirdos (like us) to The Spirit of the Suwannee Music Park in Live Oak, FL for an intimate celebration of IDM and experimental electronica, Silver Wrapper turns around and drops the biggest lineup of the fall on SOSMP.

Last year, Hulaween garnered three times as many fans as it had in past years, which is what happens when Pretty Lights, Odesza, and GRiZ join perennial festival hosts The String Cheese Indicent, among other big names. In order to dial things back to ensure safety, comfort, and good ol' family vibes this year, it has been announced by Silver Wrapper and its partners in this endeavor, Purple Hat Productions, that only 20,000 tickets will be sold.

We are predicting Electric Forest-style runs on tickets for this blowout Halloween weekend, so go ahead and grab your passes ASAP, folks. That would be our advice. And I haven't even gotten to the flippin' lineup!

SCI holds its position at the top of the Hulaween heap, as it does with Forest, and this year they are joined by the biggest British electronica act on the planet, Disclosure, for a DJ set by the Lawrence brothers, who are coming off the epic release of their latest album, Caracal. Massive Americana act My Morning Jacket is paired up with Umphrey's McGee, Rebelution, Anderson .Paak & the Free Nationals, Snarky Puppy, Lettuce, and Greensky Bluegrass to cover the non-electronica front, but you know we've got our eyes on STS9, Gramatik, RÜFÜS DU SOL, Slow Magic, Bob Moses, Boyz Noise, and Manic Focus, among others. Looks like Big Gigantic is also bringing its collaborative set with The Motet to central Florida this year.

As always, colorful costumes aren't just expected, they are demanded. Spirit Lake will be in full swing with spooky decorations, amazing artwork, and jaw-dropping installations. Camp on-site, hotel it off-site, or get some friends together to go in on a cabin. Special rentals and rates will be made available on the website.

Wave 2 will coming down the road, but expect tickets to be sold out well before that lineup drops. So what can you do? Jump on the on-sale date, which is this Friday, April 29 at noon EST. Best of luck to you Hulaweeners (maybe we should workshop that nickname?), and we'll see you in the swamp.

Visit www.suwanneehulaween.com for more info, and maybe you can just park there until Friday.