There is no comparison between heRobust’s debut EP and Rob & Hood, his second release —and I mean that in a good way.  How does one put the cerebral funkiness of Albumin up against the stripped-down grittiness of Rob & Hood? At this point, Atlanta, Georgia native Hayden Kramer still seems to be trying out different styles.

Listening to Albumin, I find I lack the descriptive terms to explain it. My impression was of hearing an entire album in reverse. And yet there was an undeniably upbeat and soulful quality to it.

As I progressed through the ambitious 16-track Late Night/Morning After double album and on into the equally ambitious Busted remix album I began to notice the subtle shift away from the experimental glitch sound of the debut to the more dubstep-oriented style of Rob & Hood. This shift is most evident on Busted.

Rob & Hood is in your face from the first moment. Gone is the experimentation. In place of laid-back glitch is thumping, crunching bass, squealing syths and trap-style percussion that wallop listeners over the head. The whole EP has a harsher, more hardcore production. It is urban music through and through.

And this might be the one thing that remains consistent across all of heRobust’s albums despite the differences in style and execution: the emphasis on the rhythms of urban life. Kramer’s music shows a great love of the hip-hop and rap that’s been coming out of Atlanta for the past few years.

Another thing that remains consistent is Kramer’s penchant for wordplay when titling his songs. Albumin gave us some real doozies such as “Triceratopless” and “Chewy Bakka.” Late Night/Morning After has “Coma Toast,” “Dopplegang Bang,” and “Chaka Con Artist.”

Rob & Hood’s titles aren’t as outlandish as those from previous albums, but will still elicit a snicker or two: track 2, “Beanie Babymama” springs to mind.

Kramer’s musical chops are evident, as is his ambition. Some producers might release the odd EP or only single tracks. Kramer has obviously put in the time producing so much music in a short span of time.

But keep in mind that only a year has passed. With so much material to choose from critical comparison of one album to another is entirely possible but would be, frankly, unfair. Kramer’s music has been well received so far. He may one day settle on a particular style but for now we’re along for the ride and it’s fun to wait and see where he’ll go next. 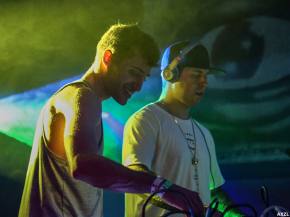