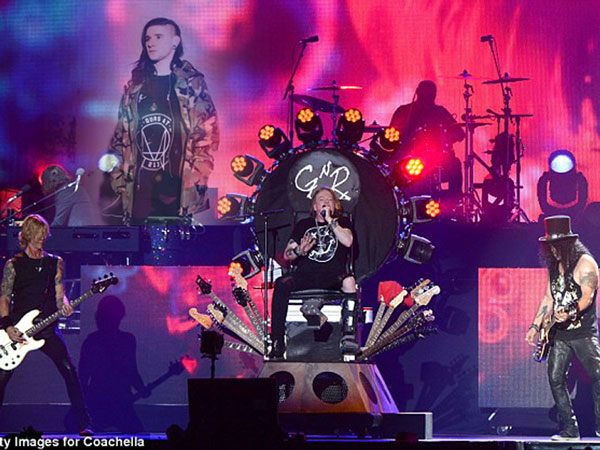 In a surprise move that raised a lot of eyebrows amongst diehard fans, Guns N' Roses announced EDM superstar Skrillex would open for the rock legends at NRG Stadium in Houston, Texas last weekend. Newly reunited this year (missing only a couple members from its core lineup from its early 90's heyday), GNR has been relatively well-received on its arena circuit comeback tour.

On August 5th, Sonny Moore was tasked with opening duties, and ably mixed in classic rock and metal mash-ups within his dubstep and trap-heavy set. Selecting old favorites from Pantera to KISS, Skrillex worked hard to get the light early crowd suitably amped.

As the video shows, the bright lights and plentiful fog cannons didn't rock the crowd as a regular Skrilly audience might explode, but by the time the iconic Queen sing-along "Bohemian Rhapsody" hit the speakers, Moore had the fans right there with him.

Before debuting the Skrillex DJ and production project, Moore was the lead guitarist for the screamo outfit From First to Last. He's mixed metal and rock into his sets since the inception of the project. You can read his interview about the GNR set with Rolling Stone.