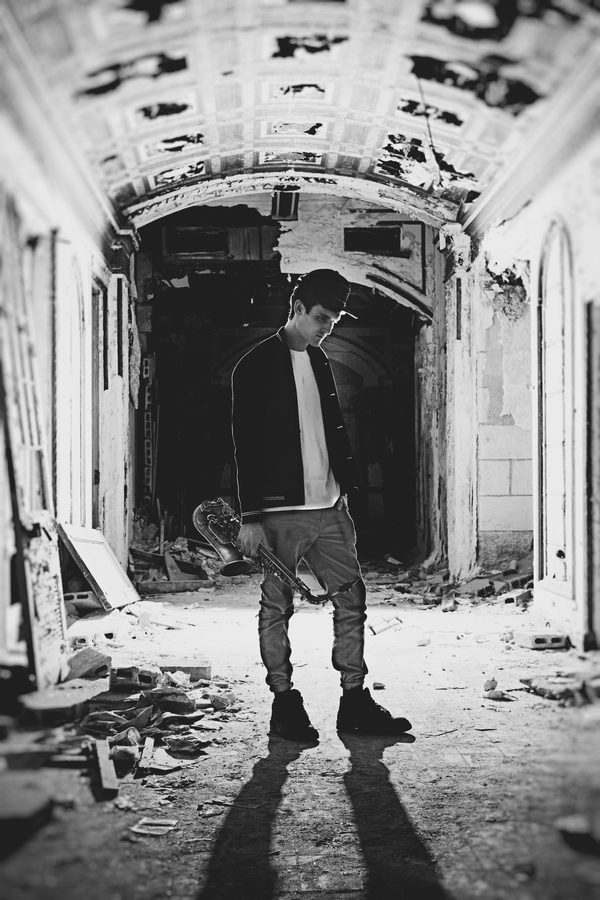 Last September, the sax-wielding producer out of Michigan known as GRiZ (Grant Kwiecinski) unveiled Mad Liberation. The long-awaited release struck a chord amongst lovers of electronic music, fusing elements of hip-hop, dance, dubstep, and jazz to create a head-bobbin, forward-thinking debut. Regardless, there seemed to something missing. Sonically the album was undoubtedly solid, but it came off as a collection of scattered songs as opposed to a concise album. You really can’t knock the kid though. His goal was to further introduce the “Mad Liberation” mantra to the world, and he did exactly that.

Since then, GRiZ’s career has skyrocketed at light speed. Headlining tours, producing music with the almighty Gramatik, and working his way further up the bill of every major festival he’s played. 23 years old and letting up is simply not an option. On Rebel Era, we witness the next step in Kwiecinski’s undeniable progression. The whole project meshes in a much more compatible format, contrasting rampant and soulful instrumentations with an abounding supply of vocal samples. Each detail adds volume to album’s overall aesthetic, from the Fear and Loathing of the future album cover to its natural ebb and flow. Party music made by a man who likes to party.

The first five songs of Rebel Era introduce listeners to GRiZ’s more soulful side. Sure, there are upbeat and pulsing moments, but the overall ambiance tilts closer towards live instruments. Whether he’s sampling 2Pac on “Gettin’ Live,” Lynyrd Skynyrd on “Hard Times,” or Nas throughout “DTW to DIA,” it’s clear Kwiecinski loves to shake things up. The line between poignant and dance-worthy has never been so uncertain, packing emotion into each groove-laden moment. Another highlight is “Simple,” coalescing The Floozies’ bright guitar rhythms with alluring sax sections on the album’s most blissful tune. “On The Beach,” surfing the day away, listening to The Beach Boys like Endless Summer just came out. Two references from 1974 in one short sentence.

Excluding “How It Ends,” a tame and visceral jazz outro featuring Big Gigantic’s Dominic Lalli, side B of Rebel Era shifts GRiZ’s attention towards a heavier, bass-laden palate. Dubstep becomes Kwiecinski’s obvious genre of choice on tracks 6-10, pummeling eardrums with influences from his earlier work including multiple tracks from Mad Liberation. “Dance With Me” and “Keep The Dream Alive” stand out as the section’s most promising anthems, utilizing dub womps while still packing a melodic and inviting punch. And although certain pieces of “Do My Thang” and “Crime In The City” seem somewhat out of place at times, we have to respect GRiZ’s desire to experiment.

On Rebel Era, we experience a young producer becoming more of a veteran with a consistently rejuvenating and genre-defying sound. Kwiecinski builds off Mad Liberation while still creating a sequel type effect, injecting unrelenting passion and intensity into his respectable craft. There is palpable progression between the two albums, but there is also still room for further development. Fortunately for GRiZ, he is young, hungry, and staring success right in the face behind his dope ass shades. Plus, let’s not forget you can download this baby for free. And there’s not much better than free.