Ghostland Observatory has overcome adversity, bucked contemporary trends, and just generally set their own trajectory on their meteoric rise in the electronic music industry. Selling out theaters across the country, this uncompromising act has taken the DIY aesthetic to amazing heights. The duo heads to the mountains of Avon, CO to split the air with their trade mark live lasers at the forthcoming SnowBall Festival. I got the chance to talk to Thomas Turner, GO’s drummer and synthesizer expert, about a little bit of everything.

Nick Callaio: This is the second year for SnowBall and the lineup has diversified greatly since last year. Can you briefly describe Ghostland for possible newcomers this year?

Thomas Turner: It's an interesting mix of electronic music and psychedelic punk rock. When Aaron [Behrens] and I get together, we bring our elements that we are good at and combine them to make some quality music.

What does SnowBall hold in store this year?

TT: I hope it will be good. There are good vibes every time we play in Colorado, it seems like you guys want to have a good time out there. When the crowd wants to party as hard as you guys, those are the best crowds to play for. Maybe not the first couple years we were touring but in the last three to four years everyone has been really nice. Normally when we are there the weather is nice so no doubt we are excited about this.

Your music style is uncommon to most acts in the electronic market, how did you find your sound coming from Austin, Texas?

TT: Aaron is more into rock like Queen and The Doors, basically really good front men as entertainers. I am into old school rave like Detroit techno and Chicago house along with French house and experimental German techno stuff. Electronic music really excites me, I love it. Just that combination of our two sounds and how they work together, obviously we are not playing straight rock or techno. No one can really classify us under a generic genre like house but can meet us somewhere half way with this fun energetic music.

Are you currently making a new album? Will this differ from the rest of your releases and how will it define you as a duo?

TT: We are working on new tracks like crazy. I honestly would like this album to be, like every album, the best thing we have produced as a band. I want people that hate Ghostland to listen to it and maybe they still will not like us, but will love the record. I am really, really determined to make that happen. Everyday I am grinding to push everything through to the next level. I have never been as excited about a record or as hard on a record as this one.

There are a number of unique keyboardists in the electronic market with many styles and influences, where do you pull yours from?

TT: I like old sounding organs and things like that. That sound gives me a certain mood. I like anything that gives me some sort of emotion. If I am messing around with keyboards I always like to get a mood for the foundation of my style at the current moment. The most important thing to me is shaping the atmosphere with the mood I create with my music.

Aaron Behren's voice is out of this world, did his high pitch tone come natural when you launched Ghostland?

TT: When we first started to jam together we were in this small room called the Music Lab. There were a bunch of bands that rehearsed there also and there was no sound proofing in that particular room. There were metal, punk, and rock bands playing all the same time really loud so we would have to turn up really loud to hear what we were doing. He really had to get up there to hear himself so I am thinking that is where it came from.

Your live show is emphasized by a number of lasers, will you always have them on tour or will there be a switch in the near future?

TT: I really like what the lasers do because the technicians are doing a performance along with us. By the first couple notes they will know the color scheme and basic movements. They are always moving when I make a different sound, so visually it is doing what I am doing. I think they are cool and I like how they go out into the crowd, kind of like a 3-D experience. I love all the lights but I have never heard anyone complain about them after our shows – definitely wouldn't be a smart decision to do away with the lasers.

So: “A robot making love to a tree.” I don't even know where to start with that, can you explain that a little bit more for me?

TT: The human and electronic elements are getting together for an evening and creating some noise babies.

“Freddie Mercury-helms-Daft Punk” That is a pretty big comparison, do you think Ghostland lives up to that punchy description?

TT: Queen is pretty legendary and so is Daft Punk; I don't know who pinned that deal and I will never say we are on the same level. Just was probably some description that someone laid down back in the day. It gives me inspiration because once you get to that level, you are reaching out to so many people. I have to the most fun when a large mass of people gets together for the same thing and forgets about all their problems. It's not about taking yourself too seriously at that point, you there to give people what they want.

Do you think your live show production and music are equally balanced out in terms of how you rose to your current popularity?

TT: It came in steps. We definitely didn't start out with a crazy live show. It started out with us showing up to any venue that booked us and trying to give them a good show. We weren't shoved down the throat of mainstream popularity, it was just word of mouth. As the shows grew, we had more money to spend on lights and all that stuff like we wanted to do. It was just a natural progression, you know? When we did start to use the lasers, we only used them at festivals where the budget was bigger. I couldn't tell you how many phone conversations I have had with my booking agent telling me I wasn't making any money because of all the lights. It was the first opportunity to play in front of a crowd like that so naturally I wanted to hit a home run. If I pay thirty or forty bucks for a concert ticket or however much festival tickets are, I want to see something really cool. I don't want to see a normal band with a row of lights on them, I love to see that crazy stuff go down.

What are your thoughts on playing very small venues in Austin, Texas to selling out large venues like the Fillmore in Denver? Do you think it was just a good time to enter the market?

TT: We didn't even think about anything like that, we just wanted to play some music. Austin at the time was primarily country, blues, indie rock, and southern. So when we started to do our thing, it really stuck out and was different from the rest of the content out there. A number of people liked it and a lot of people didn't like it. It started growing because kids would love how different it was from what they could see in Austin. It had humble beginnings as far as no plan, but we just went with the flow and here we are. 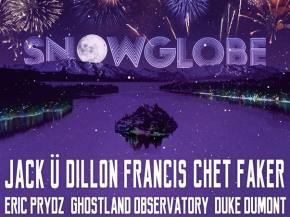 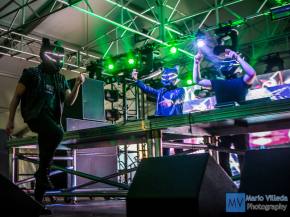 The 7 Weirdest Things We Saw at Euphoria Festival 2015 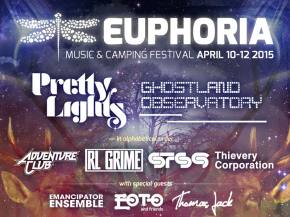 10 Artists to Catch at Euphoria Festival