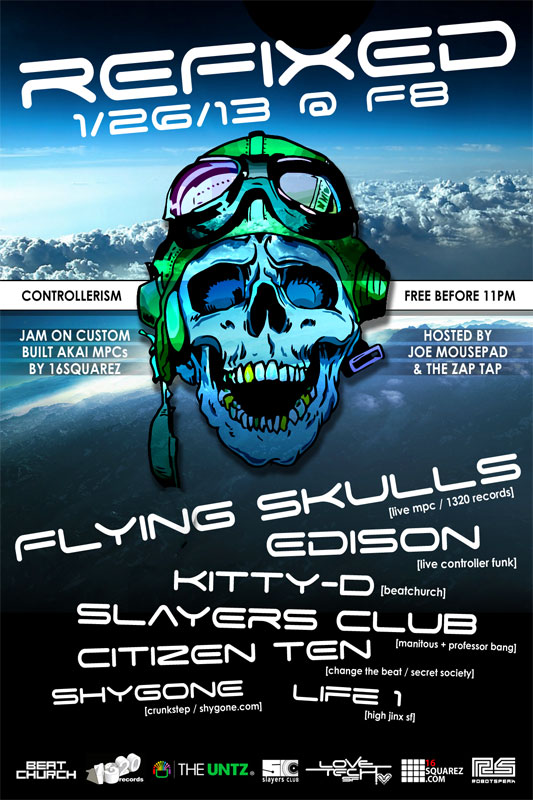 Northern California's music scene has long been a bellwether of trends bound for the global stage, and today the zeitgeist is “controllerism.” The word has come to mean excitement and engagement, a move away from pre-programmed music and towards improvisational performance. When paired with SF's favorite electronic styles it forms a heady blend of danceable beats and on-stage antics. One upcoming show in SF hits at this crossroads between Controllerism and Bass Music: "Refixed" January 26th at F8 (formerly Icon Lounge) free until 11pm, as The Flying Skulls celebrate the release of West Coast Bass: Refixed on 1320 Records.

Also featuring a second room with interactive demos from custom AKAI MPC rebuild wizards, 16squarez.com. The Sacramento based MPC shop has been cranking out custom built and styled MPCs for AraabMUZIK, The Flying Skulls, edison, and many other pad-mashers. The night's custom lighting design will be presented courtesy  of Carter Adams of ArtNowSF. 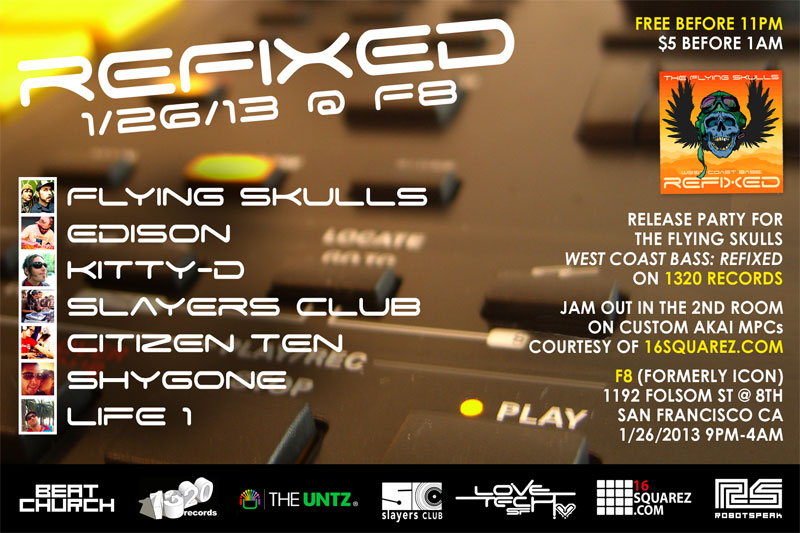 The Flying Skulls, dubbed the "masters of improv beat bashing" by Chromekids, present a tightly knit set of live West Coast bass music with two MPCs and a Korg keyboard. Edison, who was crowned 2011 SF Controller Battle champion, has recently been on tour with Aesop Rock and performs with two modified Monomes that are mounted into lunchboxes.

Kitty-D is a Beat Church founder and tastemaker, wielding only the freshest and most tightly honed electronic tracks from around the globe. Any music fan in San Francisco can tell you that the Slayers Club is the vibe equivalent of a freight train bound for funky town; these folks know how to have fun. Shygone is a beat mechanic from Los Angeles who has spent the last 4 years putting the boom into the trunks on Pico Blvd. Citizen Ten has an infectious style incorporating elements of rare groove, glitch hop, and West Coast bass, opening up for acts such as Amon Tobin and DJ Shadow.

Beat Church is one of the premier SF nightlife destinations for connoisseurs of electronic music and a place known for hosting the hottest bass producers when they come through California. LoveTech is a community supporting the pioneers of live electronic musicianship, combining musical innovation and inspired celebration to produce an immersive & heartfelt multi-sensory experience that will blow your mind, shake your ass, and inspire your creative soul. Robotspeak is San Francisco's oldest independent electronic music instrument store, providing a venue for music education and feeding the Bay Area's hunger for synths from Moog, Dave Smith, Korg, Alesis, and more.
"Refixed" @ F8 (formerly Icon)
1192 Folsom SF CA
Jan. 26, 2013 9PM-4AM FREE until 11pm, $5 until 1am

The Celebration of April 19th, 1943 Through Art and Creation - Bicycle Day RE:CREATION in San Francisco